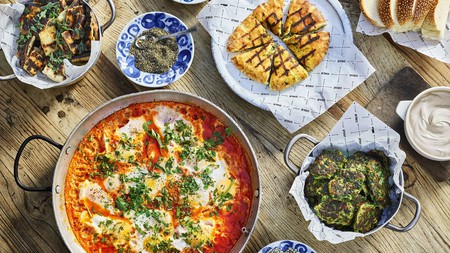 Tel Aviv is home to some of the finest restaurants in the country. And while there may not be a unified definition of what Israeli cuisine actually is, it can be agreed that it’s one that takes the best from a variety of global food cultures.

Israeli cuisine is a mix of modern trends, the cooking traditions of Jewish immigrants and typical Middle Eastern cuisine. With a growing consciousness towards dietary choices and an emphasis on using the freshest ingredients the country has to offer, Tel Aviv’s culinary scene is worth exploring. 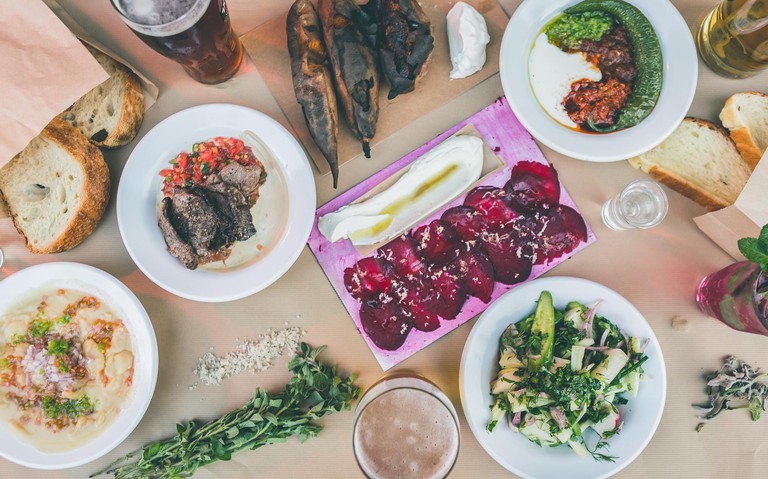 Established by Israeli celebrity chef Eyal Shani, Port Said has the vibe of a casual hipster block party. Shani’s menu is based on simple and delicious ingredients, creating dishes such as baked sweet potato, minute steak and string beans served directly on to brown paper tablecloths. Port Said has a vibrant and energetic atmosphere that attracts a young crowd every day of the week. 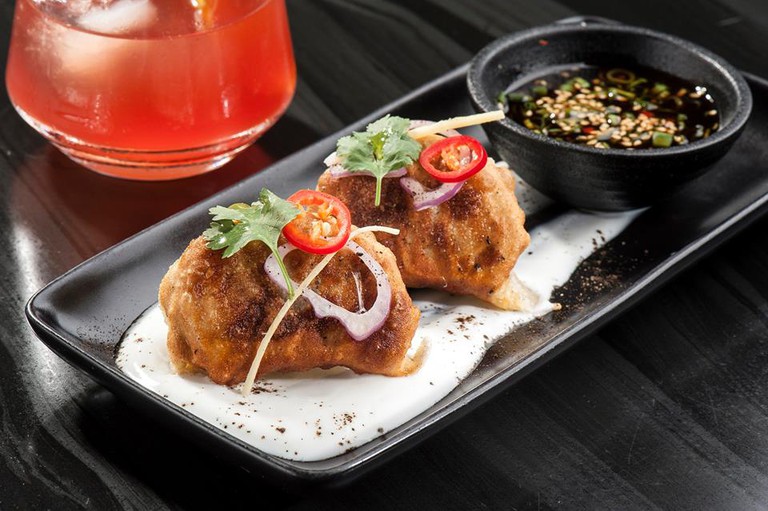 After travelling through Southeast Asia studying its unique cuisine, Israeli chef Yuval Ben Neriah opened Taizu on Menachem Begin Road. Ben Neriah defines his restaurant’s cuisine as “AsiaTerranean”, and his menu includes elaborate dishes that combine Asian flavours and local ingredients, such as dumplings with shrimps and Jerusalem artichoke and steak seasoned with lemongrass and Vietnamese spices. The staff at the restaurant recommend ordering a variety of dishes to appreciate the well-crafted menu. Taizu also hosts a special Indian feast menu every Sunday evening.

A short walk from Rothschild Avenue is Magazzino – a stylish and contemporary Italian restaurant situated in a renovated industrial space in southern Tel Aviv. The restaurant serves classic dishes such as brick-oven pizzas and pastas, as well as vegetable or calamari fritti. Find a seat in the garden for a romantic dinner and save room for something sweet; the dessert vitrine features a number of cakes and other delicacies. A slice of the gooey crack pie is highly recommended. 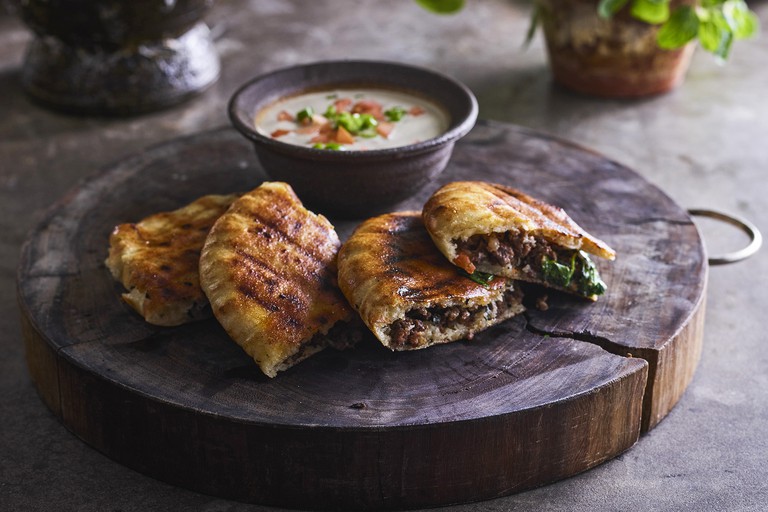 Brothers Assaf and Yotam Doktor opened this contemporary steakhouse in 2011. The restaurant’s casual dining atmosphere is reflected in the small dishes of fried vegetables and meat skewers, which are meant to be shared. Ha’achim is located in the heart of Tel Aviv on Ibn Gvirol Street and offers an excellent Friday brunch, which includes a buffet inspired by the dishes typical of the Mediterranean. The Doktor brothers also own the nearby experimental kitchen, Dok, and the recently opened Abei, which specialises in seafood.

A high-end seafood restaurant, Shila is located on Ben Yehuda Street, a short walk from the beach. For the past 12 years, its founder and head chef Sharon Cohen has been creating light and fresh dishes from locally sourced meat and fish. Its most famous dish, the fish tartar wrapped in avocado is not to be missed, but also worthy of a mention are the fish carpaccio, and the selection of pan-seared seafood and vegetables. A seat at the bar allows patrons to watch the chefs at work in a relaxed and casual atmosphere. 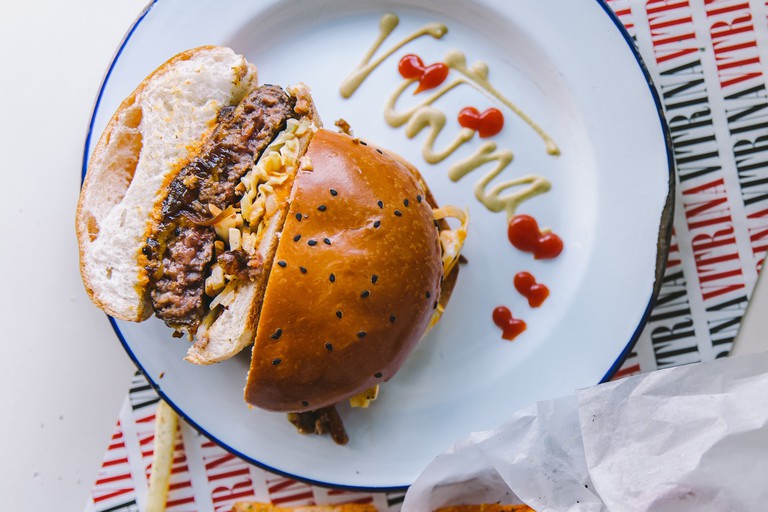 Vitrina is famous for their burger | © Zohar Azar and Yael Bonfis
Vitrina, one of Tel Aviv’s most popular restaurants, has been serving hungry locals for almost a decade. It has two locations in the city, one near Rabin Square and the other near Rothschild Avenue. Both venues are famous for their Butler Burger, which has special toppings like onion jam, aioli and arugula and comes with the optional addition of gouda or blue cheese. Also available on the menu are vegan and vegetarian options, such as the red quinoa, lentil and mushroom burger, and a mix of sweet potato and regular French fries with lemon zest. This popular restaurant is closed on Fridays and Saturdays, and is busiest on Thursday nights.

Cafe, Israeli, American, $$$
Facebook
Email
Twitter
Pinterest
Copy link
Share
Yom Tov Cafe sits in one of the best spots in the city, right in the middle of the Yemenite Quarter and just behind the Hacarmel Market. After a day of shopping in the market, it is the perfect place for a light meal, a cup of coffee or a pre-dinner drink. Popular with tourists and local residents, the café has plenty of options, such as meze, vegetables cooked in a tabun (a special clay oven) and small-size pizzas. The interior has a vintage-style decor with second-hand furniture and old books, and there is an outdoor seating area. 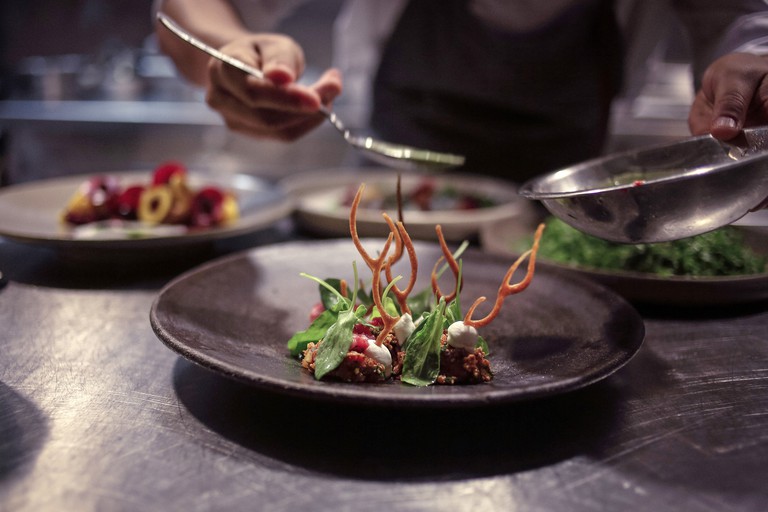 A group of four young, food-savvy Israelis, The Sucré Group, set out to create a restaurant that best exemplified their culinary interpretation of Tel Aviv. The result is Mashya, a restaurant based on taking the best local ingredients and spices and implementing them within a fine-dining context. Mashya offers a lunch and dinner menu, but is most well-known for its breakfast. There is a good selection of main dishes, including frittatas and shakshuka, a rich buffet, classic cocktails like a mimosa or Aperol spritz, and hot beverages. Included in the extended evening menu are gourmet dishes such as roasted celery root with local cheese.

Restaurant, Middle Eastern
Facebook
Email
Twitter
Pinterest
Copy link
Share
Hummus is a star feature in both Arabic and Israeli cuisine. Almost everyone in the country has an opinion when it comes to choosing the city’s best, but Abu Hassan is almost always considered worthy of a mention. Ali Karavan opened his small, humble hummus place in the 1970s in the heart of Jaffa, the ancient port city in southern Tel Aviv, and over the years the Karavan family has opened two more shops. The hummus here is prepared every morning, but the traditional recipe and method of preparation have not changed, keeping dedicated fans filling the original location everyday. A dish worth trying is the msabbaha – a spicier hummus dish in which the chickpeas are less processed. It’s served with pita bread and pickles, making for an affordable and filling lunch.
Give us feedback