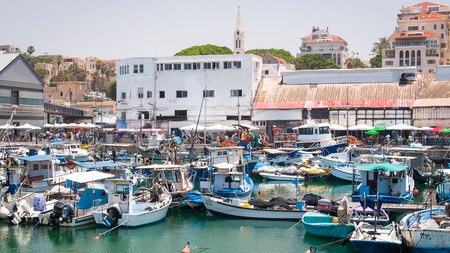 Jaffa is a tranquil neighbourhood within the Tel Aviv metropolis, but strolling through its narrow, winding streets is like stepping back in time. Smell the aromatic spices in the air, sip strong coffee in tiny, family-run cafés and enjoy the refreshing sea breeze in this ancient port city.

Jaffa may be much older than Tel Aviv, but it is still very much in possession of a vibrant, youthful energy. Ancient streets end at teeming bazaars, golden buildings perch above the crashing waves of the Mediterranean and fishing folk haul in their catch in the historic port, just as they have done for centuries. And because of the golden sunshine for most of the year and the fusion of musical trends and multicultural artwork, a visit to Jaffa is a delight to the senses, too.

Peak Garden, or Gan HaPisga, is located in the middle of Jaffa and provides the best lookout point for miles. Climb the paths between green lawns and archaeological remains that date back 3,500 years to reach the summit. From the top, visitors are rewarded with the perfect vantage point of the perfectly blue Mediterranean, Jaffa’s renowned Ottoman-era clock tower and port and Tel Aviv’s southern neighbourhoods. On a clear day, Haifa can be seen in the distance. Come back at sunset to watch the sun as it sinks into the sea and the lights sparkle along the coastline. 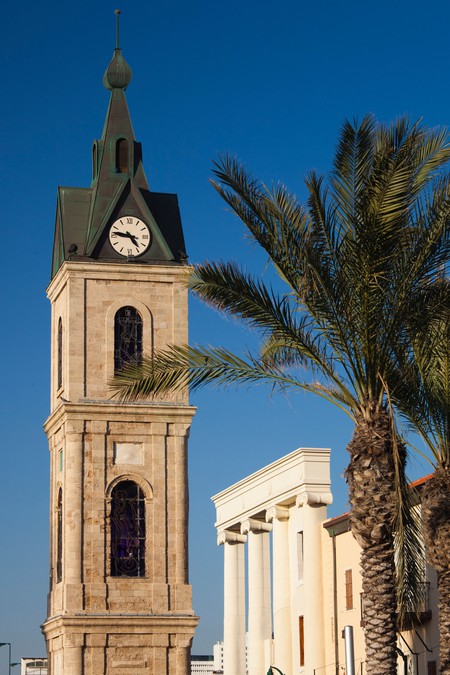 In the heart of old Jaffa lies Kikar Kedumim, home to excavated ruins from Roman and Hellenistic times, a visitors’ centre and a virtual storytelling experience that tells of Jaffa’s astonishing 4,000 years of history. Hear about beautiful Andromeda, rescued from a rock in Jaffa’s harbour by the mythical Perseus on a flying horse; meet Yehuda Agronimos, a colourful resident of 1st-century Jaffa; and discover other moving, hilarious and uplifting tales from this ancient city’s past. 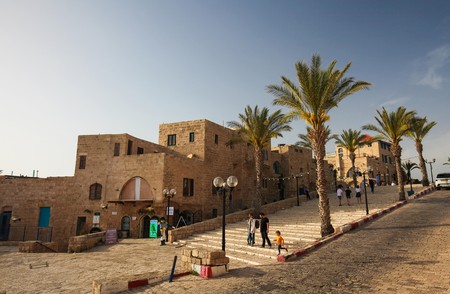 There are so many delicious things to nibble, sip and crunch in Jaffa that taking a culinary tour of the area is a must-do. For those who prefer to discover these delicacies on their own, the famous Abouelafia bakery in Old Jaffa is not to be missed. For centuries, the same Jaffa family has been baking flaky bourekas, soft pitta breads fragrant with za’atar, sweet and sticky baklava and other mouthwatering specialities. Dr Shakshuka, in Jaffa’s flea market, is the place to go for authentic shakshuka (a dish typical of the region, consisting of poached eggs in a spicy tomato sauce) and other Libyan delicacies, or taste the hummus at Abu Hassan restaurant, which lays claim to the title of the best hummus in the world. 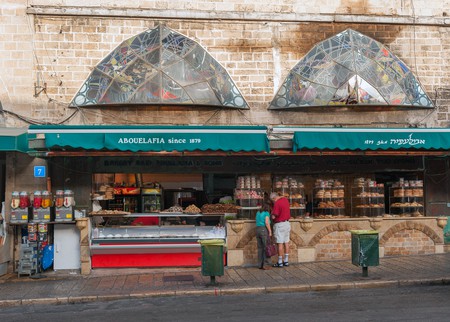 From bargain hunting in the markets to seeking unique housewares in artisanal art and design stores, Jaffa is full of places to shop. Stop by the Greek market for art and antiques; SAGA or Asufa for clean lines and minimalist design or Puaa for thrift-store furniture and knick-knacks. No shopping trip to Jaffa is complete without a visit to the flea market – Shuk Hapishpashim. The streets are crammed with boutique stores and stalls selling second-hand goods, colourful printed clothing and jewellery. Visitors should be prepared to haggle! 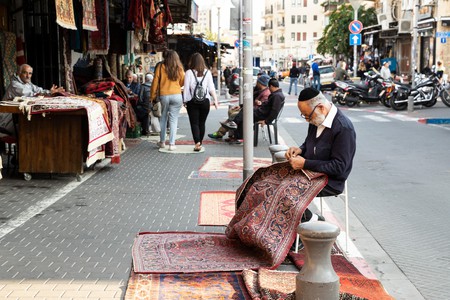 Jaffa is home to multiple mosques and churches. The Great Mahmoudiye Mosque’s minaret is visible from everywhere in Jaffa. Built out of Roman relics taken from Ashkelon and Caeserea, the honey-coloured stone and colourful tiles contrast spectacularly with the turquoise sea. The 19th-century Baroque-style St Peter’s monastery is situated nearby. Admire its decorative, pink facade before descending into the ruined 13th-century crusader castle that lies below it. Finally, stop by the Immanuel church on the border between Jaffa and Tel Aviv’s Florentin neighbourhood for an example of European architecture that’s rare in the Middle East. It’s a small and charming Lutheran church that’s often used as a concert venue. 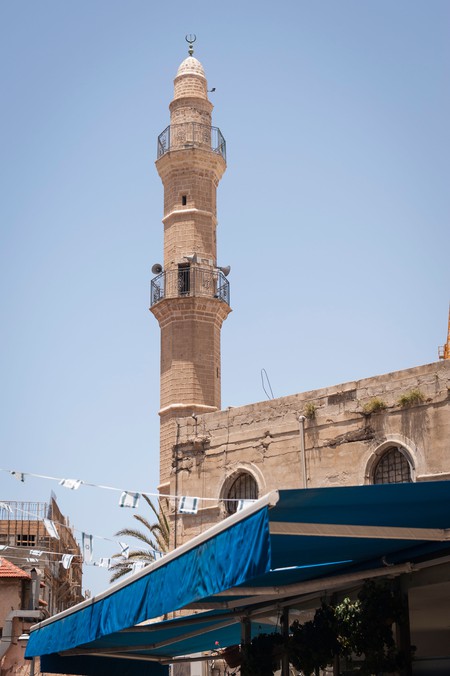 Don’t miss the Cuckoo’s Nest, Jaffa’s coolest bar. It features a rooftop beer garden, rotating art exhibits, movie nights and awesome cocktails, wine and food. Hardcore clubbers who don’t want to head into Tel Aviv can dance until the small hours to music blasting from the live stage in the Cuckoo’s Nest.

Beit Kandinof is another bar-cum-art centre: by day it runs art classes and by night resident DJs entertain the crowds. The combination of creativity and cocktails is something that can only be found in Jaffa’s mixed and multicultural streets. It is also a great place to taste delicious Turkish and Moroccan dishes, such as fried cauliflower with mint and parsley or seared calamari with sumac. On warm summer nights, live music, entertainment, drinks and food can be enjoyed outdoors at the flea market on Thursdays and the Greek market on Tuesdays. 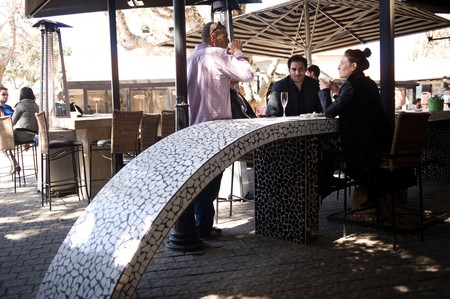 Art is everywhere in Jaffa. The Greek market is the city’s oldest market for artists and art dealers, and the place to go for unusual and unique art bargains. Wander the streets to find the famous Floating Orange Tree, an art installation in Old Jaffa, or the Jaffa Art Salon, which is the place for bold contemporary Arab and Israeli art. The Frank Meisler Gallery exhibits religious and biblical artwork, from paintings to sculptures. Or step into the Ilana Goor Museum to marvel at furniture, paintings, Judaica, jewellery and fashion items. 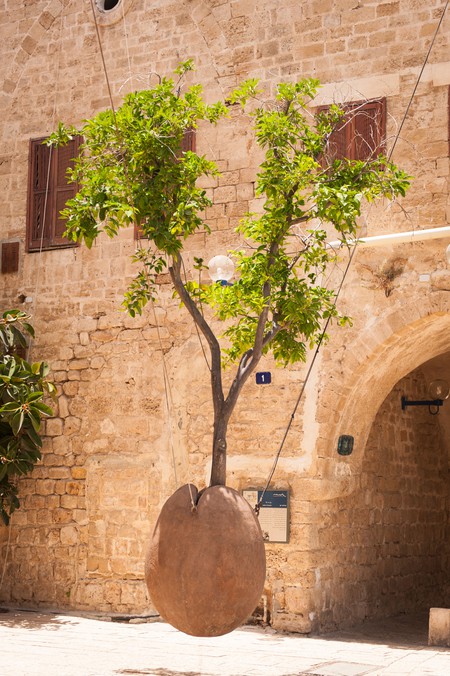 Stroll by the sea

Jaffa’s port has been the beating heart of the city for centuries, and is wonderfully picturesque, with small yachts, sailing ships and traditional fishing boats rocking by the docks. It’s best to come in the late morning to see the fishers unloading their catch. Afterwards, take the opportunity to eat deliciously fresh fish in one of the many restaurants alongside the water before enjoying a post-meal walk along the boardwalk as musicians and street performers entertain the crowd. Finally, take a boat trip from the port to see Jaffa’s golden stones and historic minarets and towers rising out of the water. 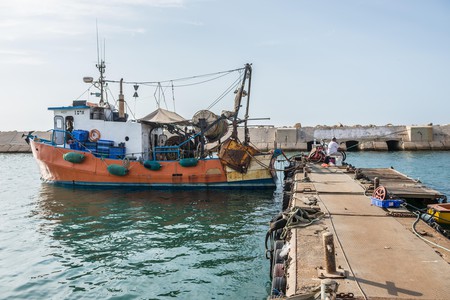