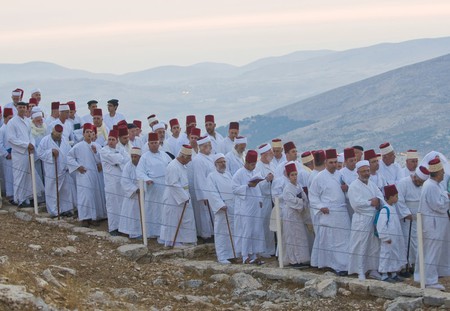 Members of the ancient Samaritan community during the holy day of Shavuot in Mount Gerizim, West Bank, 2012 | © Kobby Dagan / Shutterstock

Best known from the New Testament parable of the Good Samaritan, this community of just 800 people is split between Holon, a city just south of Tel Aviv, and Kiryat Luza, a small village near Nablus in the Palestinian controlled West Bank. Neither Jewish nor Palestinian, but with identities influenced by both, the Samaritans are Israel’s smallest religious minority but, arguably, the most interesting.

According to the Samaritans, they derive from the biblical tribes of Menashe and Ephraim, the sons of Joseph who lived over 3000 years ago. They follow the traditions of Ancient Israel, without the later additions made by Jewish sages. ‘In general, we are the same people,’ says Benjamin Tsedeka, an affable Samaritan historian who is the leading voice on Samaritan history and an elder of his people. ‘We are from the north (of the ancient Kingdom of Israel) and the Jews are from the south.’ While their early history is mysterious, a popular belief among scholars is that they diverged from Judaism around the time of the Second Temple.

The Samaritans went from numbering over one million people in the 5th century to just 140 by the 17th century. Now, after centuries of persecution and forced conversions (most ethnic Samaritans are now Muslims), the minuscule community is desperately clinging on to their heritage and traditions.

In contemporary Israel, life hasn’t always been plain sailing either, as they’ve been caught in the middle of the deadly conflict between Israel and the Palestinians. As the First Intifada broke out in 1987, (a five-year period of Palestinian uprisings), Samaritan families decided to flee the Palestinian city of Nablus to avoid being caught up in the violence, relocating to the nearby Mount Gerizim, the holiest site in the Samaritan religion.

What makes the Samaritans so fascinating is their complex identity, a unique fusion of Jewish religious traditions and Palestinian and Israeli culture. Those living in Kiryat Luza, a village under the control of the Palestinian Authority, are in many ways nationally and culturally Palestinian. They speak Arabic, study in Palestinian schools and universities and work in Palestinian government offices.

However, their religion is closely intertwined with Judaism, connecting them to the millions of Jewish Israelis living beyond the Green Line. Indeed, Palestinian Samaritans worship in a synagogue, speak ancient Hebrew, observe the Sabbath, celebrate Jewish holidays such as Passover and Sukkot (although the dates differ) and their holy text is called the Samaritan Torah. 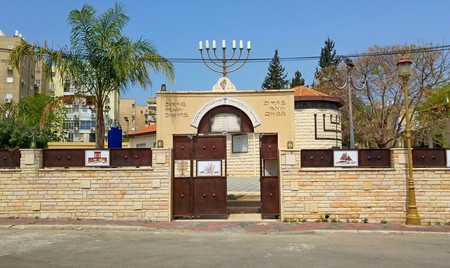 How do Samaritans navigate such a complex identity? When it comes to the Israeli-Palestinian conflict, neutrality is the word of the day. ‘We don’t go with Palestine, and we don’t go with Israel,’ said Hosni Cohen, a Samaritan priest, in a 2016 interview. ‘We must go straight down the middle.’

Tsedeka reiterates this, telling Culture Trip: ‘If we want to survive in this crazy region, we have to live in peace with both sides. This is our policy, not to be involved in politics – only to be at peace with Palestinians and Israelis and ensure they’ll both feel at home in our community.’

One of their better-known customs is the sacrifice of animals on Passover – a tradition Jews gave up hundreds of years ago. Every Passover, the Samaritans gather on Mount Gerizim, sometimes with a crowd of up to 1000 curious international tourists and locals, Jewish and Palestinian, to carry out their ancient tradition of slaughtering sheep. Dressed in white robes, members of the faith slit the throats of dozens of sheep simultaneously, before dabbing the animals’ blood on their foreheads and cooking them to eat for dinner. 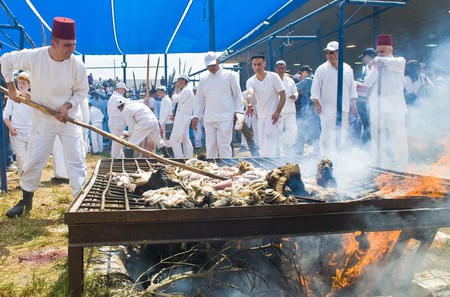 Samaritan food is based on fresh produce and meat – never frozen. Spices such as anise, coriander, cumin, paprika, turmeric and za’atar are fixtures in their cuisine. One of their most special dishes, nazaleh (Arabic for ‘going down’), includes eggplant with rice, onion and chicken. The juice of the eggplant trickles down throughout the dish giving it its flavour, hence the name nazaleh. The culinary traditions of the Samaritans developed from the same roots as Palestinian cuisine, so the two have much in common. A typical Samaritan dessert, for instance, is knaffe, a delicious sugary treat ubiquitous in Palestinian kitchens.

You can learn more about the community’s heritage and culture at the Samaritan Museum in Nablus.

Standing in Israeli and Palestinian society

Samaritans have a unique position in that they hold both Israeli and Palestinian identity cards. This allows them to travel in Israel with ease, which sets them apart from other Palestinians. They also have both Arab and Jewish names, helping them assimilate on both sides.

Those who reside in Holon, near Tel Aviv, are fully integrated members of Israeli society who speak modern Hebrew and serve in the Israel Defence Forces. Samaritans living in the Palestinian controlled territory of the West Bank are also integrated members of that society, although they have reported instances of discrimination for being ‘Jewish’. The late Palestinian leader, Yasser Arafat, even allocated scholarships to Samaritan students to study abroad and the Palestinian parliament reserved a seat for Samaritan priest Saloum Al-Kahin, who died over a decade ago.