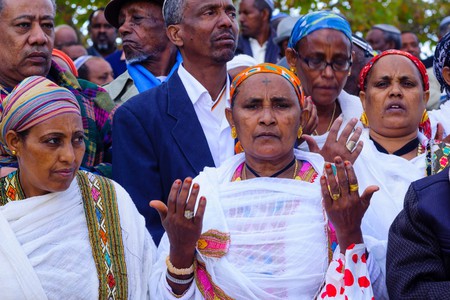 Ethiopian Jewish prayers at the Sigd in Jerusalem, Israel, 2015. The Sigd is an annual holiday of the Ethiopian Jewry | © RnDmS / Shutterstock

Israel is home to over 140,000 Ethiopian Jews. Their ancestors, it is believed, left ancient Israel for Ethiopia sometime between the 1st and 6th centuries, yet retained their Jewish identities in isolation. From the 1970s onwards, over 90,000 Ethiopians returned to their roots by making ‘Aliyah’ – the Hebrew term to describe Jewish immigration to Israel. Israel’s remarkable efforts to rescue them can only be described as one of the greatest humanitarian efforts of the 20th century.

How did they arrive in Israel?

The story of Ethiopian immigration to the Jewish State is a dramatic and intriguing one, involving clandestine missions, the Mossad (Israel’s famed intelligence service) and serious levels of Israeli chutzpah.

Ethiopian Aliyah began in the late 1970s, as the community faced famine, civil war and religious persecution. Israel’s prime minister, Menachem Begin, who himself had been a refugee after fleeing the Nazis, was made aware of their desperate plight thanks to a letter sent by a member of the community, begging for help.

However, in a tumultuous region widely hostile to Israel, rescuing these people was not a simple matter – they had to be smuggled. In 1985, in a mission known as Operation Moses, around 8,000 Ethiopian Jews were airlifted by the IDF, in coordination with Mossad, from Sudan – an Arabic country and staunch enemy of Israel.

Then again in 1991, amid domestic chaos, with rebel groups in a battle for power with the Ethiopian government, another 14,500 Jews were airlifted to Israel in just 36 hours in a clandestine mission called Operation Solomon. A total of 28 Israeli planes were in the air at the same time during this daring mission and one plane had a staggering 1,088 people crammed on board – a world record.

In the following two decades, Ethiopian immigration continued in trickles and in 2015, the Israeli government approved the Aliyah of another 9,000 people, believed to be the last group of Ethiopian Jews left to make this journey.

Today, Israel’s Ethiopian Jewish community numbers over 140,000 members, 50,000 of whom were born in Israel. The majority live in the country’s central and southern regions.

Ethiopians have made their mark in mainstream Israeli culture. In the music scene, Ethiopian artists such as Cafe Shachor Hazak (Strong Black Coffee) have seen widespread popularity and numerous others are making impressive strides. Ester Rada, whose parents were brought to Israel in Operation Moses, has one of the most beautiful voices in the country (she sings in English), while KGC is rising up in the hip-hop scene.

Aside from music, model Yityish Aynaw became the first Ethiopian Israeli to win the Miss Israel beauty competition in 2013, and in 2017, Ethiopian actor Yosi Vasa starred as the lead character in a primetime Israeli TV show called Nevsu, a comedy revolving around an Ethiopian man who is married to an Ashkenazi Jewish woman and the misunderstandings that ensue.

The Ethiopian community also has their own unique Jewish holiday called Sigd, a day of religious introspection during which the community prays to God and celebrates the fulfilment of their centuries-old dream for a return to Zion. The community congregates en masse in Jerusalem for this celebration, which was officially declared a national holiday by the government in 2008. 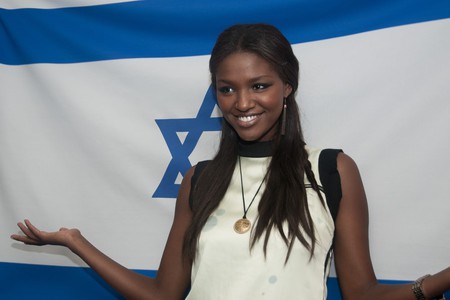 Ethiopian eateries are dotted around central and southern Israel, serving up traditional cuisine (spongy, sour injera bread with an assortment of stews, salads and vegetables on top). In Tel Aviv, Balinjera, located in the enchanting Yemenite Quarter, is one of the best, while the vegan Tenat restaurant is also highly rated. In West Jerusalem, there are also several great options, including Dire on HaHavatselet Street in the city centre. Be sure to wash down the food with a St. George, a tasty Ethiopian beer.

Ethiopian Israelis have faced difficulties fully integrating into Israeli society. They are statistically worse off than the rest of Israel’s Jewish population: the number of Ethiopians who obtain academic degrees is significantly lower, they receive less income and poverty rates are higher. They have also faced discrimination, most infamously in 2015, when two Israeli policemen were filmed assaulting an Ethiopian Jewish soldier, which sparked large and violent protests in Tel Aviv.

It’s not all bad, however: Ethiopian Israelis have made a significant impact on Israeli culture and can be found working in the upper echelons of society, from Mehereta Baruch-Ron, who is the Deputy Mayor of Tel Aviv, to Avraham Yitzhak, the Chief Medical Officer of IDF’s Southern Command.