The Stage is the first and only English-speaking performing arts community in Tel Aviv. Behind the phenomenon is co-founder and CEO Maya Hagoel, who with a background in business and a fervent interest in the arts was able to guide this new venture to the success it has found. We explore the ways in which The Stage is providing unique opportunities for English speakers with a passion for performing. 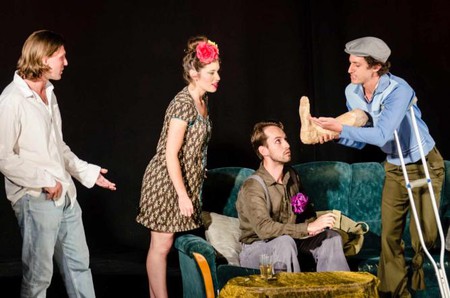 The idea for The Stage was born when Maya Hagoel and six other friends got together over brunch on a Friday morning and after sharing their frustration with how few opportunities there were for English-speaking performing artists, decided to change this and form their own community. Since its establishment in October 2013 The Stage has continued to grow, with new members joining all the time.

What makes The Stage so unique, suggests Maya, is its sense of community and the fact that it is shaped by its members. Anyone who is interested can get involved, no matter how much experience or training in the arts a person has, and ideas for future events and productions all come from within the community. In true grassroots fashion there was even an ‘Idea Generation’ meet-up recently where attendees could either suggest ideas for new community events or just find out how they could become involved in future projects.

The Stage is not a business: all members are volunteers and proceeds are only used to fund future events or productions. This means that its members are truly passionate about what they do. The Stage provides a variety of opportunities to become involved. From professional productions to workshops to social events, there is something for everyone. 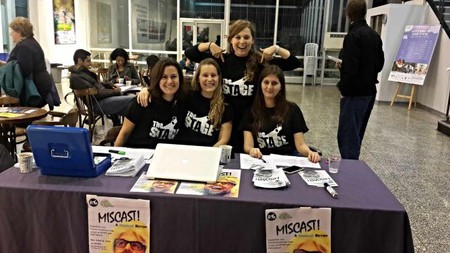 The artistic vision of each large scale production is often alternative and original. For example, in their minimalist version of The Vagina Monologues, the director Asher Gelman used the 13 actresses, as scenery as well as props, with each wearing a different color.

In March, The Stage in association with Amber Gitter put on the much awaited Hauptmann. The play is based on the controversial trial of Bruno Richard Hauptmann; an innocent man falsely accused of the murder of the infant son of aviator Colonel Charles Lindbergh in 1932. Against the backdrop of a media-controlled USA, Hauptmann retells his story of the events before being sent to the electric chair. Producers of the show welcomed the challenge of casting just six actors for the twenty-seven parts in this modern drama.

To demonstrate its versatility, The Stage has also produced a large scale musical show entitled Miscast: A Musical Revue. Miscast was the first musical by the performing arts group and featured many popular songs from Broadway hits such as Wicked, Grease, Phantom of the Opera and The Book of Mormon. Keeping true to The Stage’s desire to challenge itself and stray from the conventional, all characters were miscast; a man is cast as a woman and an older actress plays a sixteen-year-old girl. After a sold out run in December, The Stage brought the show back with new numbers and some old favorites just a few weeks ago for another run.

Their upcoming show of Hanoch Levin’s Bachelors and Bachelorettes will arrive in the fall, and to put a new spin on things it will be translated into English. The idea of bringing a well-known Israeli playwright to light in English stemmed from one of its community members, Uzi Razzin, a professional actor and director by profession, who will direct the play. 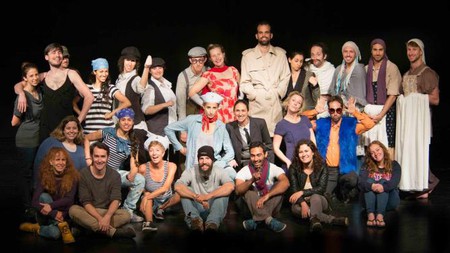 In addition to putting on large-scale productions, The Stage also holds workshops for those who are interested in honing their skills or starting a new hobby. The classes, about to start their fourth semester, include acting, musical theatre and improvisation. Based on surveys, even the types of workshops are inspired by what the community is looking for and Maya anticipates that future projects will include dance, film and an a cappella group.

For those looking to combine socializing with entertainment, there are also community meet-ups such as The Slam Series – free monthly poetry and story slam events run by Karen Lerman. These are mini productions where the more intimate atmosphere allows anyone to perform a poem or story based on themes such as ‘Turning Points’ and ‘White Lies’. Judges are picked at random, creating an informal and inclusive environment, and rank each contestant out of ten. The winner of each slam is then entered into the Grand Slam competition. 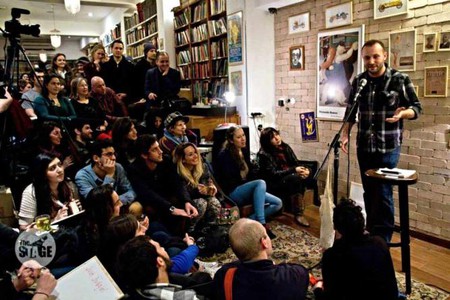 In July, The Stage held their first ‘One Act Play’ festival. This was the chance for the audience to see six comic one-act plays in one night, all less than twenty minutes long! In an attempt to involve as many member of the community as possible, each play had its own actors, producers, directors and backstage assistance. Maya notes that this flagship project has become an annual event and the production team has just started taking submissions for this year’s festival, set to be held in August.