After: The Mixed Media Art of Michel Platnic

Michel Platnic was born in France in 1970 and currently lives in Israel since 1998. He started out as an engineer, but slowly found himself being drawn deeper into the world of plastic arts. His martial arts background cultivated a strong awareness of body language, a strong feature in his art. But what medium does Platnic stress in particular? His current exhibition “After” will only leave you with more questions than answers. 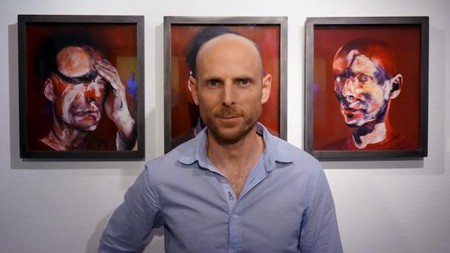 ‘After’ is currently exhibiting at The Open Museum of Photography, Tel-Hai Industrial Park. Michel Platnic’s works on display at “After” correspond in a direct manner with the paintings of British artist Francis Bacon. He brings the paintings of Francis Bacon to life, using real people (including himself) as Bacon used his canvas, transforming each image into an imaginary world of its own. He uses a series of images and shows them from various points of view, both physically – where the same scene is created from three different angles and through different media.

Platnic recreates Bacon’s painted images using three different mediums: painting, photography and video. This somewhat confusing combination leads the viewer to question the borders of each media while faced with the question, “What is it I am seeing”?

So, what exactly are you seeing? On walking into the exhibition space the first work is the triptych ‘Three Studies of Lucian Freud‘. From afar these three large images look like paintings, but once coming nearer it is apparent that the “painted” figure is in fact a photograph of a living person whom Platnic has painted on. The three dimensional figure stands out in contrast to the flat, solid color background. To complicate things, this painting-photograph comes to life with a slow but sudden movement of the figure, at which it becomes apparent that what you are looking is, in fact, a video made to look like a photograph made to look like a painting. The same triptych is then shown in a different area of the exhibition solely as a photograph, giving the viewer a second perspective of the same image, in a different medium. 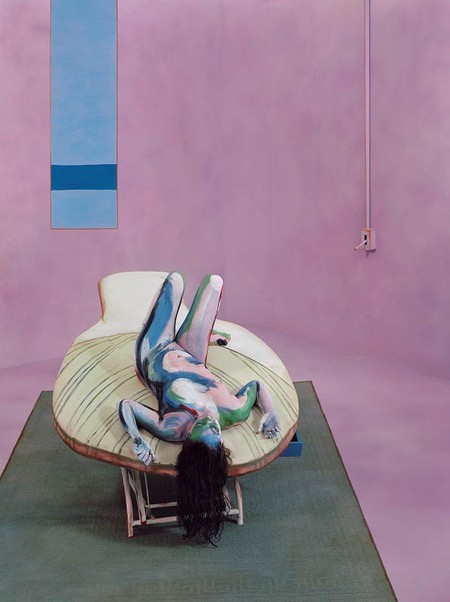 Another example that stands out is the work ‘After Study for Portrait Two (After the Life Mask of William Blake)‘ in which a portrait of a man emerges from the darkness. The flesh of his face looks as though it is created from wide, rough brushstrokes, yet the eyes of the image begin to flutter, and his glance slowly advances towards the viewer. In the next room the same image appears, and although you may expect it to move, it is only a still photograph.

The transformation of the same work from video to photograph challenges the viewer to explore the differences in feeling between the two versions. In the photographs there is something that leaves the viewer perplexed, for it is unclear how the image was created, this uncertainty builds a tension between space and figure and throws the viewer into the unknown.

In the video, however, Platnic reveals his own strategy, as he begins from a blank white space and shows how the “scene” was built step-by-step until the final image. His intention as an artist is not in creating an “illusion”, (otherwise he would keep his secrets to himself) but an intentional exploration of different media, what sensation each media evokes and what happens when they combine into one surface. 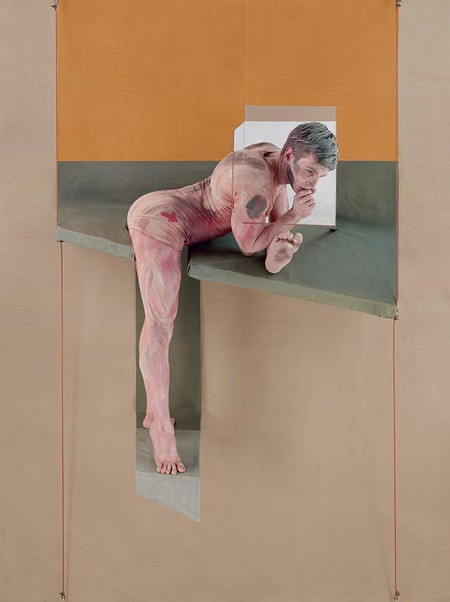 In general the atmosphere of the exhibition is a dense one, the figures in the images are all distorted, strange, unsettled and seem to be caught within a caged surface. Although the male figures are placed side by side, no one appears to acknowledge the other. Each figure is caught within his own alien existence and cannot see beyond his own frame. Can the same reflection be true regarding the use of media?

It’s as though the artist ‘plays’ with different media, combining between them and questioning the border lines of each one. But who is Michel Platnic? Perhaps he is more of a film maker, director of a scene he wants to bring to life, but if that is so, he is a filmmaker who has an exceptional interest and ability as a painter. When walking through the exhibition you will see no traditional paintings hanging on the walls (although you may notice that many of the images are framed as though they were traditional paintings) but there are many photographs. His identity remains in question, as the identity of his works. There is a hybrid of medias. This can also be seen in the subject matter itself, as Platnic does not make his own original images, but recreates images painted and inspired by others. 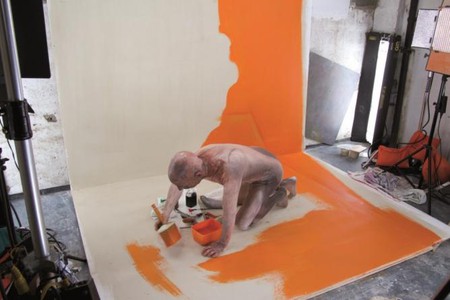 The figures displayed on the walls do not acknowledge one another. Each figure remains isolated in his own frame. Can the same thing be said regarding the use of media in the exhibition? Does each media remain isolated from the other despite the effort to combine? Platnic makes an attempt to disregard each media from its own, ‘pure’ characteristics, to surpass the borderlines between media. Is this a fruitful attempt? Does the combination of medias merge and create something new, something that is not a painting nor photograph or video but a new media with borderlines of its own? This is a question you may reflect upon while walking through the ‘After’ exhibition.

Born in the New York in 1986, Adele currently lives in the north of Israel. Adele has a BA in Fine Arts from the Bezalel Academy of Arts, as well as a teaching degree. She has participated in many group exhibitions, takes part in the ‘studio of her own’ organization and is an active artist.