A Walking Tour of Florentin, the Art District of Tel Aviv 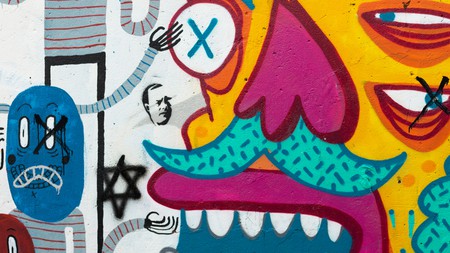 Its location on the seam between Tel Aviv and Jaffa gives Florentin a unique charm. And with plenty of upbeat eateries, art galleries, designer studios, street art, historic landmarks and non-stop nightlife, it is a neighbourhood best explored on foot.

Walking through the streets of the Florentin 25 years ago, one would never have imagined that this small neighbourhood would attract international attention, much less top the ‘most popular’ lists. Conceived as a new home for Baltic Holocaust survivors, Florentin evolved into an industrial district where all kinds of goods from carpets to spices could be exchanged. Today, it is a cultural hub where the pulse of Tel Aviv beats on from dawn to dusk; the best way to experience it is to walk through and feel its energy.

Opened in the 1930s, the Levinsky Market was one of the few places in the district where it was possible to find Balkan cuisine. With the arrival of Persian Jews, the market became a culinary carnival. Today, the street market includes delis, cafés and bakeries, and is open on weekdays (Monday through Thursday) and Friday until 2pm. Visiting during holidays, like the Jewish New Year and Passover, promises an action-packed experience with the holiday rush.

The self-guided walking tour kicks off in the morning at the east end of Florentin, with the wake of the vendors at Levinsky Market (guided tours are available with Shuk TLV). Take in the roaring noise of shop gates being lifted, the gurgling of coffee machines and the beeping of lorries delivering fresh produce. As you join the morning rush, head to Burekas Penso (Levinski Street 43) known for its crispy filo pastries stuffed with Bulgarian kashkaval cheese and coffee at Café Levinsky 41 (Levinski Street 41) for breakfast to-go, the local way. If you prefer to take your time, enjoy an Israeli breakfast at Kaimak (it’s also a popular lunch spot). 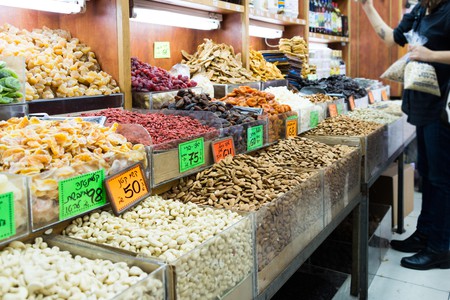 Continuing along the market road, the aromas that arise from the giant baskets and glass displays will awaken your appetite. Tastings along the way should include freshly squeezed juice (September is the best for pomegranate juice), a handful of Medjoul dates from the Galilee and a bag of mixed nuts and dried fruit from Har Sinai Deli (Levinski Street 49), including the incredible dehydrated clementine.

Eliahu Hanavi Synagogue is located on the main road of the market, an indication of how small and integrated life and business originally were for residents of Florentin. Although the neighbourhood is home to a young and secular population nowadays, some of the synagogues hold daily services, and the sound of morning prayers can be heard out through their windows. Nearby is the west side synagogue of Ahavat Hesed (Abarbanel Street 54) with its minimalist architecture, typical of its time; inside visitors can get a glimpse of the early days of the Florentin and the humble lives of the people who inhabited it.

At this point in the walk, street art has taken over the surrounding buildings. Beyond the murals of Jim Morrison and Amy Winehouse, there are cryptic messages that local linguist and tour guide Guy Sharett can help to decode during his Urban Culture and Graffiti Tour, which includes a journey into the history of Florentin and its transition from working-class neighbourhood to bohemian underground and millennial cultural hotspot. 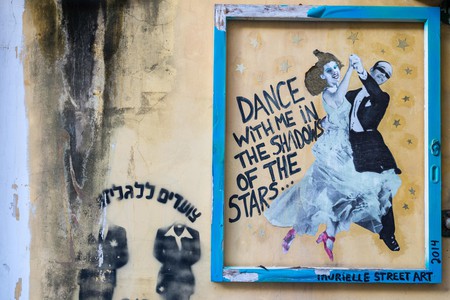 Visit the Street Art Gallery (Abarbanel Street 54), a popular venue with an impressive collection of works for sale.

Dedicate the afternoon to touring the rest of Florentin’s art galleries. On the east end is Presler Private Museum (Wolfon Street 54), famous for Yigal Presler’s collection of the finest classic artworks from Israel and abroad, and the rooftop that houses a sculpture exhibition, art library and seating area.

Florentin 45 (Florentin Street 45) is a contemporary art space dedicated to innovative and emerging talent from the Israeli and international art scene; displays here are quite impressive with English-speaking staff who are happy to guide you through the collections. Located in the “SOSA” (South of Salame Street) neighbourhood on the outskirts of Florentin are two galleries worth visiting: Dvir Intrator established the Dvir Gallery (Reshit Khochma Street 14) in the 1980s as a stage for young Israeli artists, and earned a spot in the international art scene after opening a gallery in Brussels and hosting exhibitions that include thought-provoking works. Further south is one of Israel’s oldest galleries, the family-run Rosenfeld Gallery (Ha Mifal Street 1), which opened in 1952 and which has since become a must-see on the city’s art gallery tour. On the west end, Pachot M’Elef (Under 1000) grants promising artists the opportunity to be seen and have their artworks sold, and provides admirers with a chance to purchase a work of art – but don’t dwell for too long before buying something you like, as the collection changes regularly. 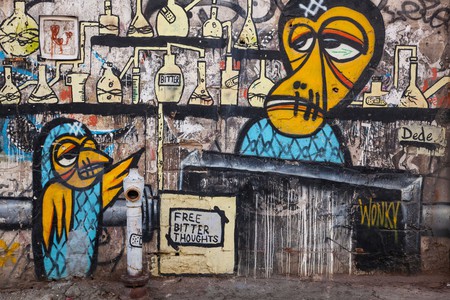 The home of great flavour

When hunger strikes, head to Haim Rafael’s deli (Levinski Street 36) and fill a picnic basket with fresh delicacies to savour by the sea or city parks; not to be missed are the seasoned olives, fine cheeses, stuffed grape leaves and smoked mackerel and sardines. The owners of the deli have been offering their speciality foods to locals since 1958, so they understand the meaning of a good lunch break.

For travellers looking to soak up some atmosphere, the Tony and Esther café (Levinski Street 39) is laid-back and provides the perfect setting for enjoying salads and the special of the day. Other popular lunch spots include Dalida, where a creative Mediterranean kitchen serves up fresh salads, tapas and seafood, and Florentin 10, with its juicy sandwiches, pasta specials and Middle Eastern shakshuka, is definitely an address to keep on hand, as you will return here for coffee, wine and spirits, which are served all day alongside sweet pastries and snacks. It’s also the perfect place to work remotely or for some afternoon reading. 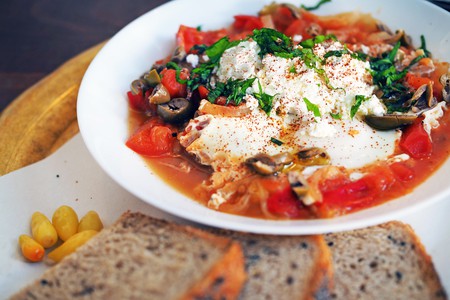 Many traditional dishes, like shakshuka, are served alongside salads and vegan-friendly options | © RBS / Alamy Stock Photo 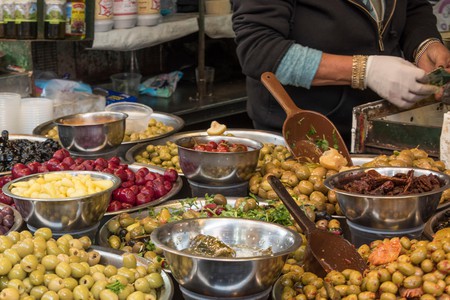 As for international cuisine, Florentin is home to a few favourites: 24 Rupee is famous among locals for its authentic Indian cuisine and overall culinary experience, with a selection of fresh thalis that vary daily; Mezcal bar is a Florentine institution serving exceptional tacos, enchiladas and a wonderful selection of tequila. Ouzeria is a place to dine, drink, chat and dance – expect original Mediterranean-style cooking and a rich selection of anise-based drinks to light up the night. At Shamshiri, a historic Persian kitchen at Levinsky Market, perfectly roasted tender meat remains the centrepiece, accompanied by sensational side dishes that transport you to old Florentin.

The latest Italian eatery in Tel Aviv, Lila Pizza (Merhaviya Street 4) has got the famous pie down to an art, most likely thanks to its vegan and vegetarian pizza options – the sweet potato pizza is often sold out, so be sure to arrive early. No reservations does mean patrons will have to queue. Another vegan favourite is Café Kaymak with tasty Mediterranean and Indian cuisine that attracts the Tel Avivian crowd; it’s also popular on Friday afternoons and has live music on Saturdays. 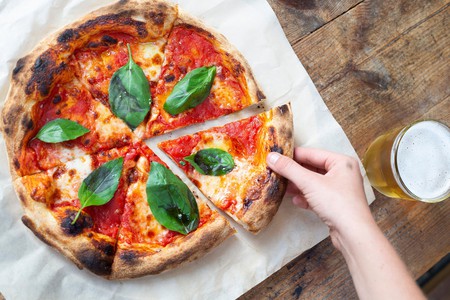 Lila Pizza is one of the latest Italian pizzerias serving traditional, vegetarian and vegan options | Courtesy of Lila Pizza

As the night unfolds, locals gather on the streets drinking and socialising. Tiny bars pop up on the narrow roads and alleyways, serving ‘happy hour’ specials and tapas. Favourite spots include: Hoodna, a workspace that transforms into a street-side bar with DJ sets, comedy and live music (after dinner try a shot of arak, an Israeli-liqueur that is also used in cold granitas during the summer); Levontin 7 serves great cocktails and hosts live music performances by budding local artists every day of the week.