A Tour of Jerusalem's Most Famous Art Installations 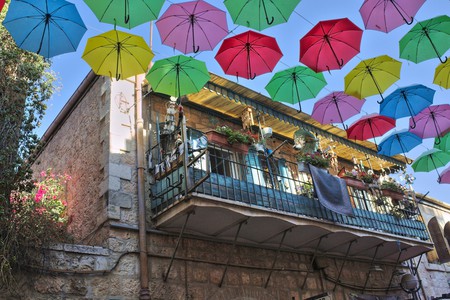 As part of a re-invention process that Jerusalem’s municipality has been implementing in recent years, incredible works of art by both renowned and young artists have popped up all around the city. Alongside tributes made by world-famous artists as a gift to the city, Jerusalem has become a great destination to explore contemporary art in. Take this tour to see the sculptures and installations you simply cannot miss in Jerusalem.

Homage to Jerusalem was the last sculpture designed by the famous American artist, Alexander Calder, who is known to be the inventor of the Mobile and one of the first sculptures to use wires in his art. The sculpture was installed in Jerusalem in 1977 in Holland Square, a location Calder himself chose, despite not having lived to see it placed. 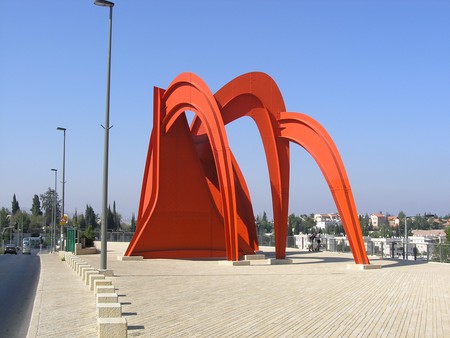 One of the first things you see upon entering Jerusalem, the Bridge of Strings is a masterpiece that can be seen from many spots in the city and can be accessed by foot or from aboard the Light Rail. Despite not being an art installation, per say, Calatrava’s articulate design of this monument definitely deserves its respect as one of Jerusalem’s most artistic features. 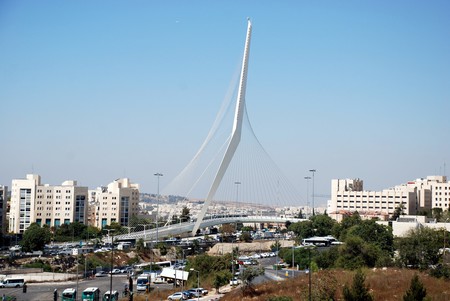 In 1977, Indiana made this 12-foot high Cor-Ten steel Hebrew version of his signature pop-up LOVE sculpture, which has been reproduced in many formats and displayed in various locations around the world. This Hebrew version was made as a tribute to Bishop James A. Pike, for whom Indiana worked for in the past and who passed away in the Israeli desert. It was given as a gift to the Israel Museum in Jerusalem. 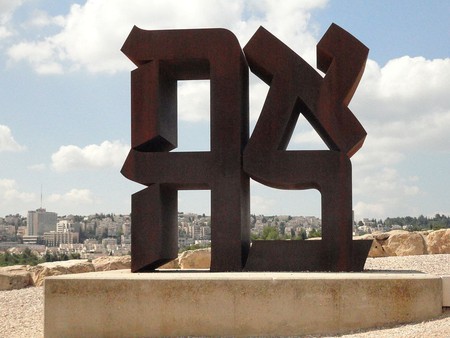 This large hourglass instalment, commisioned from British-Indian artist, Anish Kapoor, was built out of polished stainless steel and is 5.0 metres tall with a 5.0-metre diameter. The work, which captures reversed reflections of the earth and sky due to its shape, is located at the top of the ‘carter’ outdoor promenade of the museum, just before the upper entrance to the main building, and enables visitors to see Jerusalem city views, as well as their own reflections. 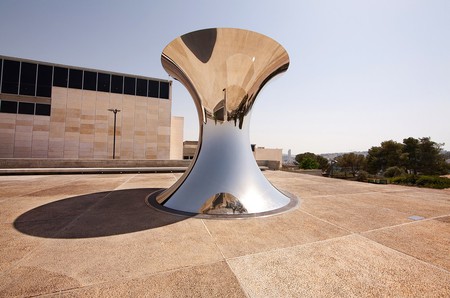 Whenever The Rainbow Appears/Olafur Eliasson

Another famous artwork located at the Israel Museum, this site-specific work was commisioned by the museum from Icelandic-Danish artist, Olafur Eliasson. It can be found at the end of the ‘Route of Passage’, the route leading to the Israel Museum’s new Gallery Entrance Pavilion, where you can also see Auguste Rodin’s sculpture. The intriguing, lively painting is actually made up of 300 individual paintings that were joined to exhibit a gradient of colours, which are visible to humans in the spectrum of light. 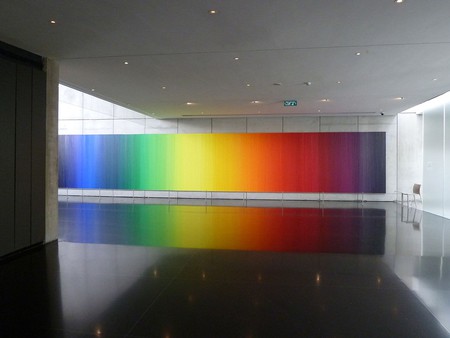 These huge dark brown trees, which recently emerged in the back of the museum, may at first glance seem real, but they are actually made as part of a series of trees created by Chinese artist, Ai Weiwei, towards his exhibition at the museum. The trees are made from the iron casts of tree trunks, branches and roots gathered in southern China and sold in the markets of Jingdezhen. Due to exposure to sun and the outdoor breeze, the iron trees rust and develop a texture which resembles that of natural trees, making the illusion even more confusing. The concept of breaking down and reassembling can be seen in the provocative artist’s portfolio.

Pray For The Peace Of Jerusalem/Dani Karavan

Modernist environmental artist, Dani Karavan, created this wall carving on the Assembly Hall of the Knesset, which makes it the most photographed work of art in Israel. The 24-metre wide piece portrays an abstract scenery view, curved in Galilee limestone, and is one of two artworks made by Dani Karavan for the Knesset, the second being a front wooden wall on the compound’s auditorium. 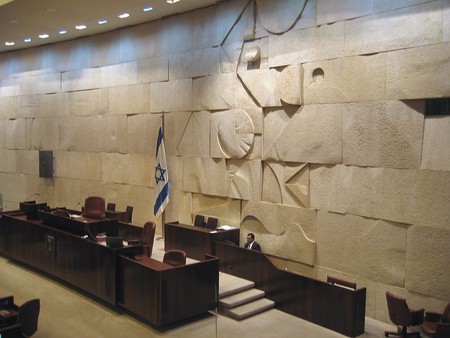 This bronze sculpture by British artist, Henry Moore, which can be seen on the campus of the Hebrew University of Jerusalem, is one of a series of seven castings currently displayed in the UK, Germany, America, Australia, Belgium, and of course, Jerusalem. First conceived when he was commisioned to create a sculpture for the UNESCO headquarters in Paris back in 1950, Moore’s idea was to incorporate a human form in an architectural context by using a seated woman. 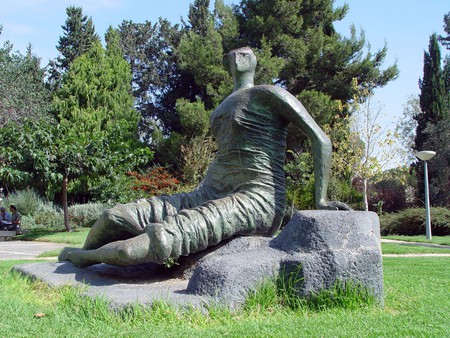