A Tour of Jerusalem's Architectural Landmarks

"Jerusalem of Gold."
Jerusalem, is one of the most complicated, beautiful, and historical cities in the world. Located in the Judean Mountains, nestled between the Mediterranean and Dead Sea, there is no shortage of things to see and do. Here’s a quick look at some of the top architectural landmarks in Jerusalem.

Building, Museum, Shrine, Synagogue
The Ahava Sculpture created by Robert Indiana in 1977, is nestled within the sculpture garden at the Israel Museum. Ahava which means “love” in Hebrew, is a new version of Indiana’s iconic “LOVE” sculpture conceived in the mid-1960s. The brown rusted metal stands on a hillside, contrasting in the day time with the bright blue skies and rolling hills of the Jerusalem area.
Looks like it's closed Hours or services may be impacted due to Covid-19
More Info
Open In Google Maps
Derech Ruppin, Jerusalem, Jerusalem District, Israel
+97226708811
View menu
Visit website
Visit Facebook page
Send an Email
Give us feedback

Museum, Memorial
Yad Vashem, a phrase which can be translated to mean “enduring memorial,” or “memorial monument,” was established in 1953 and is the “Jewish people’s living memorial to the Holocaust.” Not only is the museum itself flawlessly organized and structured, with incredibly moving exhibitions, but world renowned architect Moshe Safdie, who was commissioned to design the New Holocaust History Museum, uses the natural light and shadows to highlight and underscore the exhibits contained in the museum. The prism-like structure stretches across the hills of the Mount of Remembrance, dramatically arching upwards toward the heavens. The 200-meter long skylight diffuses light into the museum itself, illuminating the building with directed beauty and elegance. Also not to be missed, is the stunning architecture of the “Hall of Names,” a domed room adorned with photographs of the victims of the Holocaust.
Looks like it's closed Hours or services may be impacted due to Covid-19
More Info
Open In Google Maps
Jerusalem, Jerusalem District, Israel
+97226443400
View menu
Visit website
Visit Facebook page
Send an Email
Give us feedback

The epicenter of all things political and diplomatic, the Israeli Knesset building has gone through some architectural changes and moves, as the parliament membership and the number of employees in the government have grown exponentially. It is claimed that the planners of the Knesset intended to build a structure similar to the Greek Acropolis, a nod to Grecian glory. The building has been modified several times and the interior decor too has shifted through the years. The building itself is impressive and stands as a symbol of the Middle Eastern democratic process. 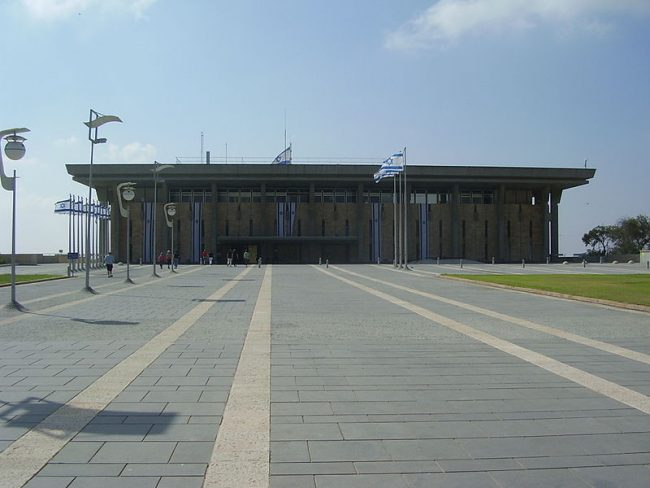 The Shrine of the Book

Also housed at the Israel Museum, are the incredible ancient Dead Sea scrolls. The scrolls are housed in the wing of the museum called the “Shrine of the Book.” The white dome sits atop a structure placed two-thirds below ground, and in the center of a large reflecting pool. Beyond the white dome, a black basalt wall faces the structure. The striking juxtaposition between the colors and shapes of the building are intentional and some interpretations point to its basis in the imagery of the Scroll of the War, detailing the Sons of Light against the Sons of the Darkness.

Gesher Hameitarim, also known colloquially as the “Bridge of Strings,” is a side-spar cable-stayed bridge which crosses Shazar Boulevard in Jerusalem. The structure was designed by the Spanish architect and engineer Santiago Calatrava, who said that the design for the structure in Jerusalem was, “to give character and unity” to the city. The bridge is intended to carry both light rail train and pedestrian traffic; the shape of the structure resembles a tent in the desert or a harp, with the cables as the strings, symbolising David’s harp. The bridge is both modern and elegant, and reaches into the city skyline in an angled cantilever, drawing the viewer’s gaze to the expansive sky.

Since Jerusalem’s Old City boasts some of the most numerous and impressive sights in the country, it deserves a category all its own. Meandering through each quarter of the city will inevitably lead to spectacular structures and incredible historic buildings. Here is a quick run down of just a few of the highlights:

The most significant site in the world for the Jewish people, is the Western Wall, or the Kotel. The Western Wall is the last remnant of the Temple, and incredibly sacred to the Jewish people. Jews from around the world gather at the Western Wall to pray, and it is common to see visitors writing notes to God and placing them in the cracks of the stones of the Wall. Because this site is of particular importance to religious Jews, come prepared and make sure to dress in modest clothing. Women will need to have their legs and arms covered, and men should be ready to put on a head covering as they approach the Wall.

Church of the Holy Sepulchre

The Church of the Holy Sepulchre is identified as the place both of the crucifixion, a place called “Golgotha,” and also houses the empty tomb of Jesus of Nazareth, where he is said to have been buried and resurrected. The church has long been a major pilgrimage center for Christians from all around the world. Within the Church and its adjacent pavilion are said to be the final four (or by some definitions, five) stations of the Cross, also known as the Via Dolorosa (“Way of Grief,” “Way of Sorrow”).

Building, Church
Monastery of Notre Dame, Jerusalem. | wikimedia
Near Damascus Gate to the Old City, is the Chapel of Notre Dame, a religious building affiliated with the Catholic Church. The site as it stands today is not only beautiful and ornate, but it also boasts guests houses, historical exhibitions, and religious learning courses.
More Info
Open In Google Maps
3 HaTsanhanim Street, Jerusalem, Jerusalem District, Israel
+97226279111
View menu
Visit website
Visit Facebook page
Send an Email
Give us feedback

Synagogue
The Great Synagogue, Jerusalem | wikimedia
The Beit Knesset HaGadol, or Great Synagogue of Jerusalem, is a spiritual, religious, and cultural center for Jews from around the world. The synagogue is dedicated to the memory of the six million Jews who perished in the Holocaust, and to all whom have sacrificed their lives for the establishment of the Jewish State of Israel. It is one of the few synagogues in the world that has a cantor and choir who officiate regularly and captivate the visitors with traditional cantorial and choral prayer renditions, as well as contemporary Jewish liturgical music. The synagogue also boasts intricate and breathtaking stained-glass windows, dazzling chandeliers, an inspiring exhibit of living Judaism, and a permanent display of hundreds of spectacular historic and contemporary Mezuzot(“doorposts” which contains religious parchment with prayers inside).
More Info
Open In Google Maps
56 King George Street, Jerusalem, Jerusalem District, Israel
+97226230628
View menu
Visit website
Visit Facebook page
Send an Email
Give us feedback

Dome of the Rock

Shrine, Mosque
Muslims believe that the Dome of the Rock commemorates the Prophet Muhammad's journey to heaven. | © Cosmo Condina Middle East / Alamy Stock Photo
Book Now
Perhaps the most iconic of all sites in Jerusalem, The Dome of the Rock. This is an Islamic shrine, located on the Temple Mount in the Old City of Jerusalem. With its gold domed top, the shrine can be seen from miles away, glistening in the sunlight. Initially completed in 691 CE, it is one of the oldest surviving works of Islamic architecture. The site holds great significance for Muslims, as tradition connects it to the creation of the world and to the belief that the Prophet Muhammad’s Night Journey to heaven emanated from the rock at the center of the structure. The site also holds importance to Jews, as the rock is said to be the site at which Abraham attempted to sacrifice his son. When preparing to visit this site, keep in mind that one should dress modestly, as it is a sacred religious center.
More Info
Open In Google Maps
View menu
Visit website
Visit Facebook page
Send an Email
Give us feedback
Book with our partner and we will earn a small commission.
Give us feedback