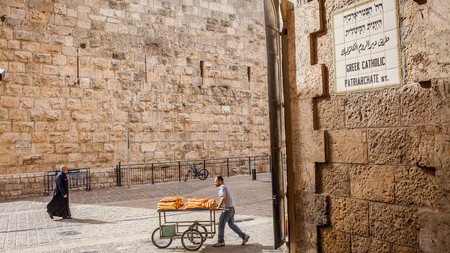 An ancient city with a remarkable history that began over 4,000 years ago, Jerusalem is a site like no other. Transformed into a melting pot where old meets new, it has seen numerous changes shape the gastronomy scene, creating a dynamic backdrop to the next generation of chefs.

Outside Jaffa Gate, the main entrance to Jerusalem’s Old City, a man is selling bread from his stand. But it’s not just any bread. The Jerusalem bagel is a simple food, yet it represents the Israeli capital. Long and oblong-shaped, the soft bread, which is often topped with za’atar or sesame seeds, has become one of the go-to snacks in Jerusalem. For Chef Amir Naor, a graduate of the acclaimed Arcadia Restaurant, “bread symbolises everything, particularly time spent with family.” A frequent baker, Naor hosts a workshop in Studio Arcadia where he prepares hands-on focaccia, boureka (filled pastries), Arcadia rolls made from mixed flour, and Armenian pizza. Growing up in a family of cooks, Naor was inspired by those around him like his grandfather, who wrote a cookbook. “Recipes are written to connect people, and a lot of Jewish cookbooks include Jewish traditions,” he says.

Home to three major religions, Christianity, Islam and Judaism, Jerusalem is an unparalleled and holy city with an old feel. As you wander around the historic streets, you’re taken on a journey from the distinct quarters of the Old City to the City of David, one of the capital’s most active archaeological sites. And while Jerusalem oozes with spirituality, the city also has a modern atmosphere that is accompanied by a surprisingly bustling nightlife and a thriving food culture.

Here’s our guide to the city’s culinary landscape. 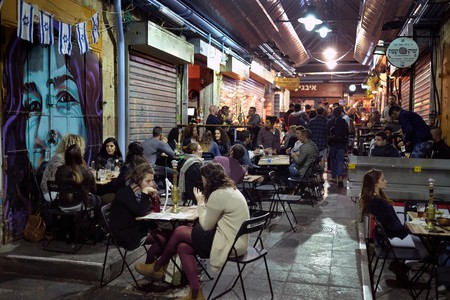 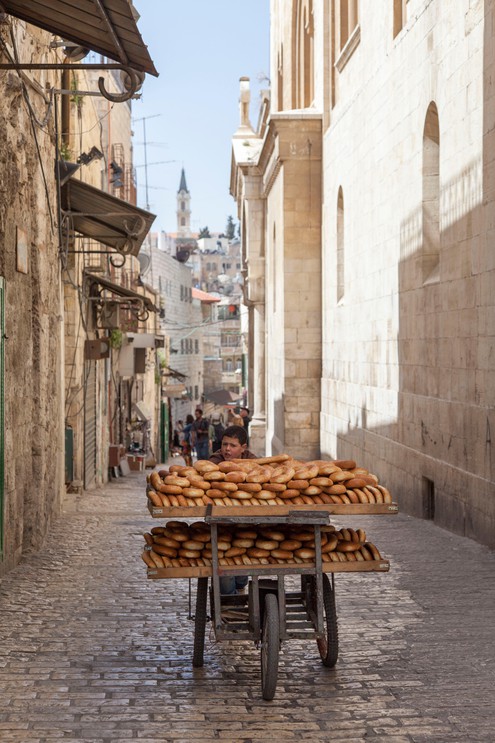 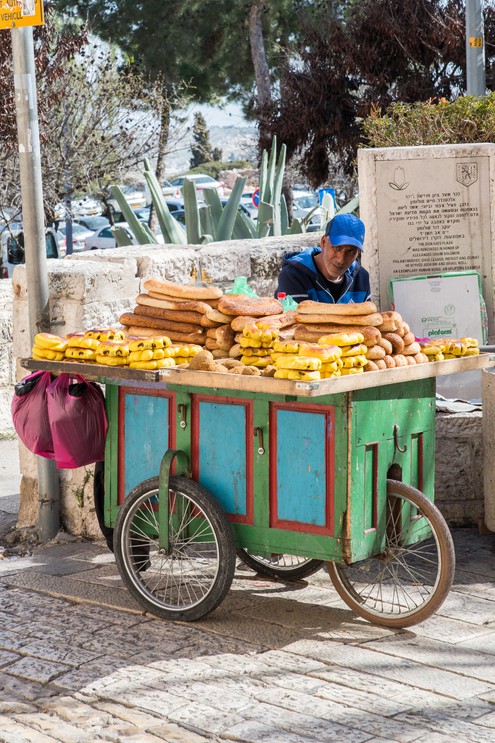 Jerusalem’s many cultures have created a space for a wide range of cuisines, offering endless food options, particularly in downtown Jerusalem where you’ll also find the Mahane Yehuda Market. Also known as the Shuk, it’s Jerusalem’s biggest marketplace and one of the most famous in the whole of the Middle East. As you make your way through the lively area, you’re surrounded by large groups of people who all come to the buzzing market when in need of culinary expertise. Food lovers interested in learning about Jerusalem’s cuisine can take part in guided food tours, where a local chef walks you through the market before preparing a tasty meal.

Tucked away between Aggripas and Jaffa Streets, the outdoor market hosts over 250 vendors offering everything from fresh goods to spices to beverages to clothing. Later in the evening, it transforms into a nightlife haven, one that quickly makes you forget that it doubles as a market during the day. Here, festivities continue until the small hours of the morning as music is blasted from the many bars and people flock to the streets to dance and mingle. 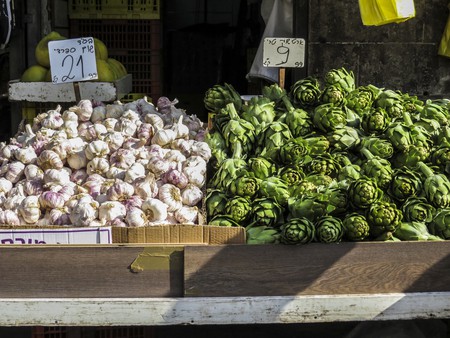 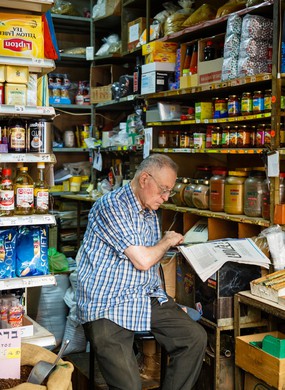 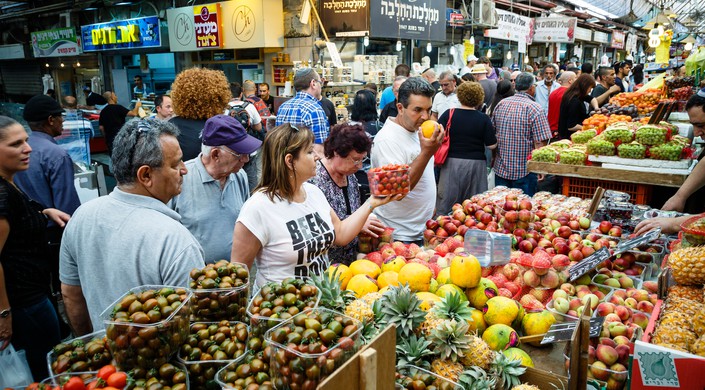 Jerusalem’s culinary scene has evolved throughout the years, thanks in large part to the food festivals that invite tourists and locals to eat their way through the dynamic city. For Merav Oren, founder of the Open Restaurants Festival, the “idea behind the festival was to combine food with art, culture and innovation,” a task that has proved to be successful for four consecutive years. Alongside world-renowned chefs, Israeli dishes made using Eastern and Western techniques are introduced to the public as the festival showcases the distinct flavours of Jerusalem. 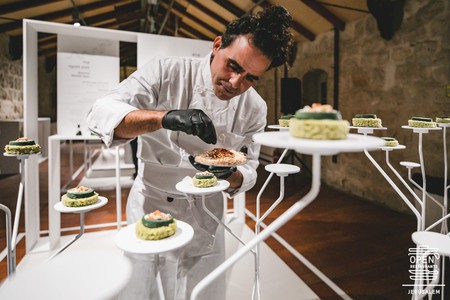 Found in a 19th-century building in the heart of Jerusalem, Mona is a former bar turned restaurant that’s famous for its dainty cuisine and cheerful atmosphere. The sophisticated venue has evolved tremendously over the past couple of years, turning it into one of the city’s most praised restaurants. A mix of Mediterranean and European dishes made from ingredients found at the Mahane Yehuda Market are served in a cosy and relaxed setting where guests can enjoy fine dining surrounded by locals and tourists alike. Drenched in history, the old stone building that houses the acclaimed restaurant is located inside Jerusalem Artists’ House, an art and exhibition space built in 1906. 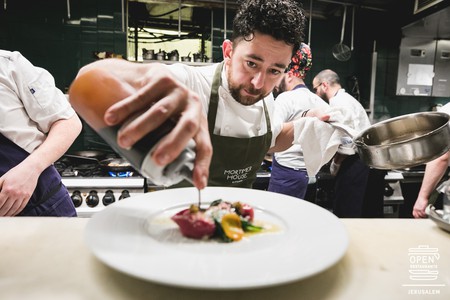 Because of its low-key exterior, it’s easy to pass by Bulghourji when strolling through Jerusalem’s Armenian quarter, as the bar and restaurant is situated in a quaint building that could easily be mistaken for a private house. But step inside the venue and you’ll find yourself in a former bulgur wheat factory that serves the best of Armenian cuisine. An array of dishes are on offer, ranging from tasty meat to tabouleh to chicken wings and Armenian-style pizza (lahmajun). A family-run restaurant, it prides itself in offering bona fide meals – including bulgur wheat – prepared using traditional methods, giving guests a glimpse into Armenian culture. An ample courtyard with a charming ambience can be found in the back of the restaurant, overlooking the Tower of David and the walls of the Old City as well as the King David Hotel. From the ancient stone structure to the cave-like rooms to the mouth-watering cuisine, authenticity is key here. 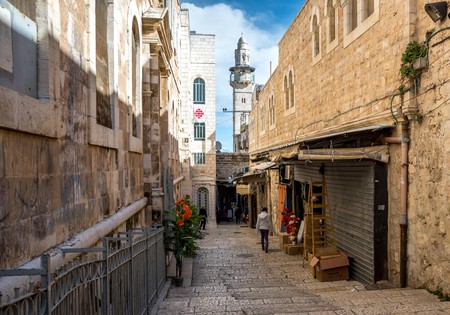 Like many restaurants in Jerusalem, Jacko’s Street handpick their seasonal ingredients from the nearby Machane Yehuda Market. Under the direction of chef Zakka Hooja, the kosher restaurant invites guests into a dimly lit and intimate venue with an open kitchen. Fresh goods influence the zesty taste of the dishes that include Kurdish ravioli, goose breast focaccia, and fish bruschetta. Jacko’s Street’s sprightly atmosphere is noticeable upon arrival as booming music is played from the speakers making it an overall fun environment. After enjoying your meal, head next door to the long and colourful bar for a shot of arak or any drink of your choice. Don’t forget to toast, l’chaim! 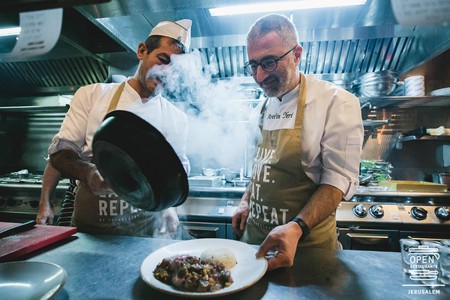 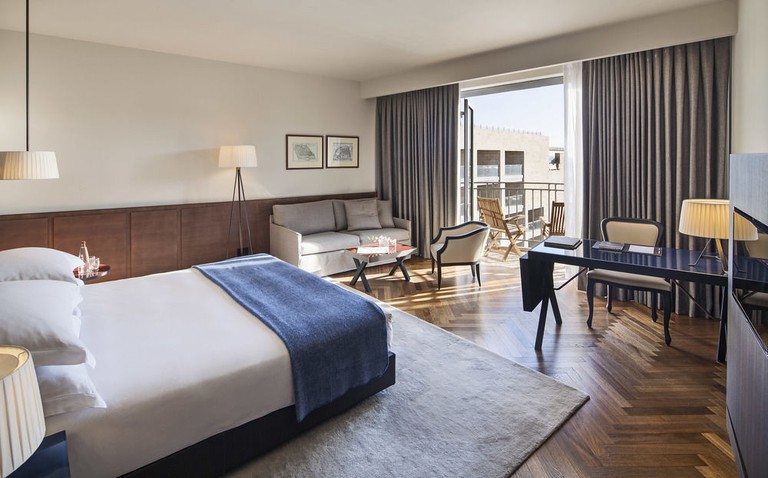 An upscale lodging located within walking distance of Jaffa Gate, the David Citadel is a luxury hotel offering modernity and serenity to solo travellers, families and travelling friends looking to uncover the beauty of Jerusalem. Overlooking the old city, the hotel boasts 385 spacious rooms – all designed with a brown and white colour palette -, a pool, spa and an array of other impressive amenities. Explore the nearby shopping centre when in need of retail therapy, sip on a glass of wine at Mirror bar while overlooking the city or enjoy a dinner at one of the on-site restaurants where a mix of local and international cuisines are on offer. When in need of relaxation after a long day, unwind in the imposing marble bathroom where a large tub and shower awaits.

Linda Konde was hosted by the Jerusalem Development Authority and Virgin Atlantic on a press trip to Jerusalem, Israel.