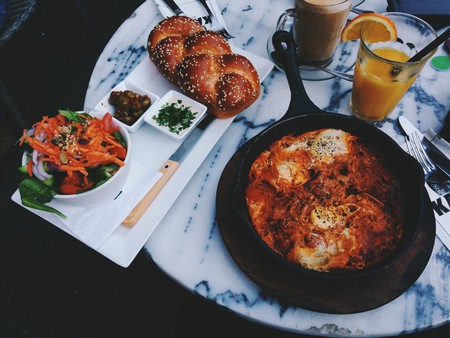 Shakshuka is a staple dish at any Israeli breakfast – whether you’re in a restaurant or at home – and it’s considered a significant competitor to falafel and hummus for the title of ‘best Israeli dish’. Eaten for breakfast, lunch or dinner, the history of shakshuka and how it became an Israeli favourite remains a mystery.

The dish’s name, shakshuka, essentially means ‘all mixed up’ – and that’s what it really is. The dish, presumed to have originated in either Yemen or Tunis, is made up of eggs cooked in tomato sauce and peppers, sometimes with onions, other herbs or cheese, and is usually served in the iron pan it was cooked in, along with some bread, which is meant for dipping in the sauce and the soft cooked-egg.

According to some food historians, shakshuka originated in Yemen, while others claim it came from the Ottoman Empire. It is only known that to Israel, the dish came from northeast African cultures, and more specifically, from the Lybian-Tunisian region. 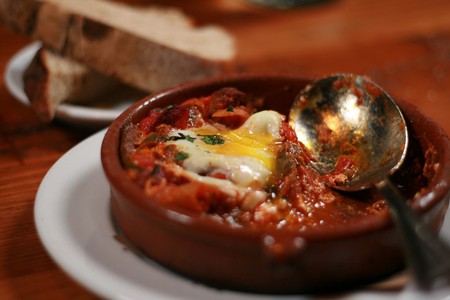 When immigration to Israel from North African countries was in its prime, immigrants suffered financial difficulties and this hearty and affordable dish, containing eggs, vegetables and bread, became a household favourite. Besides being very approachable, shakshuka is also super easy to make and only required one pan – which makes it all the more popular at picnic brunches or for light dinners.

Today, one of the most popular dishes in Israel is enjoying its moment in the spotlight in many places around the world, due to its hearty, comforting nature and healthy ingredients. Served as different variations including all kinds of spiciness levels, vegetables, herbs, cheeses and sausages, shakshuka is undoubtedly a dish you’ve already encountered.

These days, practically any dish in which eggs are cooked in the sauce is called shakshuka in Israel and that’s how variations like green shakshuka – made with spinach, mangold and cream – became popular. 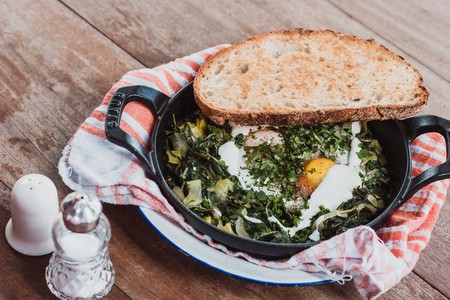 When you come to think of it, Mexican huevos rancheros, made with fried eggs served on tortillas with a tomato-chili sauce, beans, rice and some guacamole, is quite similar to shakshuka, while the Italian ova ‘mpriatorio is made up of the same ingredients and makes for a great vegetarian breakfast as well. In Spain, you can eat pisto manchego, which is made with a sunny side up egg placed on an eggplant and tomato stew, sometimes with chorizo, which is pretty similar to some of the variations you can find in Israel.

Shakshuka can be seen in so many shapes and forms across the country and you can find it served with bread, in a pita, inside a whole loaf (with the centre removed), on hummus, on pizza and the list goes on and on.