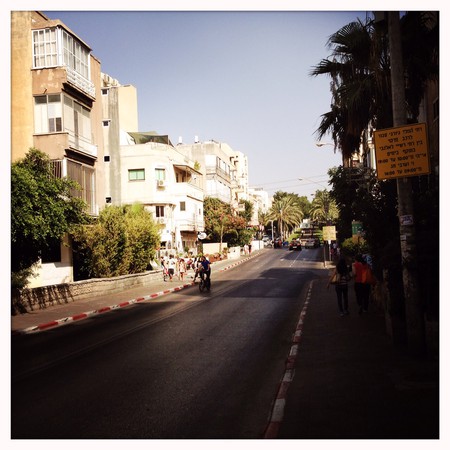 It has only been a bit over 100 years since a city emerged from a stretch of sand dunes to become one of the most vibrant urban hubs of the Mediterranean. Not only is it one of the leading startup cities in the world, but it is also famous for its concentration of Bauhaus buildings and its bustling nightlife; Tel Aviv has indeed been marked by modernity since its very beginnings. Yet, taking a look at the city’s street names is a fascinating way to find out more about its history. 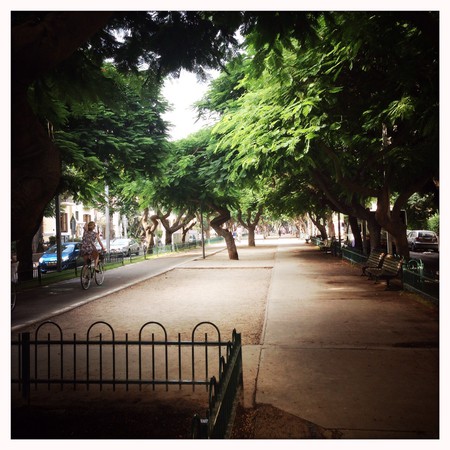 One of the most famous streets in Tel Aviv and a landmark of the city, Rothschild Boulevard cannot be missed. Located between the southwestern edge of Neve Tzedek and the Habima Theater on its other end, it features a wide central strip, ideal for biking or taking a stroll by foot. Entirely lined with trees, it offers precious shade during the hot summer days. The street is named after Baron Edmond Benjamin James de Rothschild, a French Jewish banker supporting the Zionist cause, who donated money and land to the Jewish community.

On 16 Rothschild Blvd, Israel’s Hall of Independence showcases the beginning of Tel-Aviv (Ahuzat Bait), Meir and Zina Dizengoffs’ lives, and all of the events which led to the establishment of the State of Israel along with the signing of the Declaration of Independence on May 14, 1948. The street is an important part of the White City of Tel Aviv, a Unesco World Heritage Site since 2004 and home to large Bauhaus buildings that shine in new splendor after careful restoration. A free tour in the surroundings is offered every Saturday at 11:00 am by the Association of Tourism of Tel Aviv. No need to sign up – just come to 46 Rothschild Blvd, the perfect location to start plunging into the city’s fascinating history. 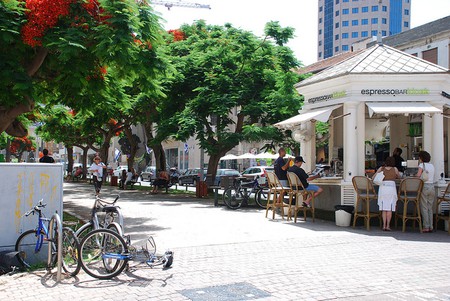 Sipping an espresso at the kiosk in the middle of the busy intersection of Rothschild and Herzl Street, at the heart of the city’s financial district, makes it hard to believe that this location was one of the first buildings of modern Tel Aviv, once surrounded only by sand. Several of the city’s first buildings were constructed by the founding fathers on Herzl Street. Theodor Herzl, one of the leaders of the Zionist movement, after whom the street is named, is also the author of the book Altneuland, in which he promoted the creation of a Jewish state. In Hebrew, the book was called Tel Aviv (hill of spring) and this is where the loop closes.

At the end of the street stood the Herzliya Gymnasium, the first mixed gender high school in which subjects were taught exclusively in Hebrew, built in 1910. Its design should resemble the Jerusalem temple, but the ancient splendor has been substituted nowadays by a less charming but equally imposing symbol of modern grandeur, the Shalom Tower. It’s worth a closer look for everyone who wants more insight into the city’s beginnings, with a large exposition consisting of old photographs, posters and videos to illustrate the city’s social and architectural development. 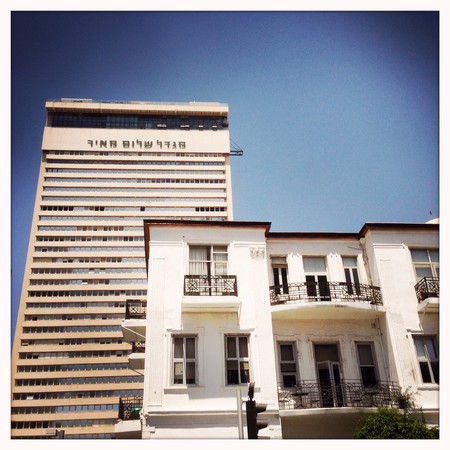 When the city was founded in April 1909, several dozen founding families gathered on the sand dunes on the beach outside of Jaffa to allocate plots of land, creating new neighborhoods. As the families could not decide how to allocate the land, they held a lottery to ensure a fair division. 66 grey seashells and 66 white seashells were gathered, the names of the participants were written on the white shells and the plot numbers on the grey shells. A white and grey shell formed a pair, assigning each family a plot. This event marked the beginning of the first modern Hebrew city. In Hebrew, the name for the founding of Tel Aviv through the lottery allocation system is Ahuzat Bayit, like the street. 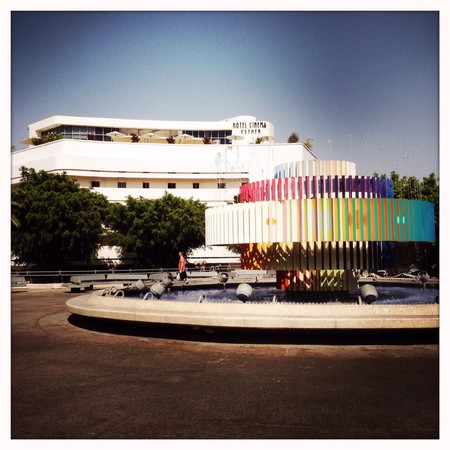 Built in the 1930s as a main street in the city’s development plan, and named in tribute to Tel Aviv’s first mayor, Meir Dizengoff, this iconic street boasts a central place in the city’s culture and history. Packed with shops, bars, coffee shops, restaurants and designer boutiques, Dizengoff Street is always bustling with life, and attracts tourists and locals equally during daytime and at night, during the week and on weekends. The iconic status of Dizengoff Street is uncontested; it has found its place even in the Hebrew language. The Hebrew slang word l’hizdangef (להזדנגף), translates as ‘to Dizengoff,’ expressing the action of strolling down this north-south street. So, do you want to Dizengoff? 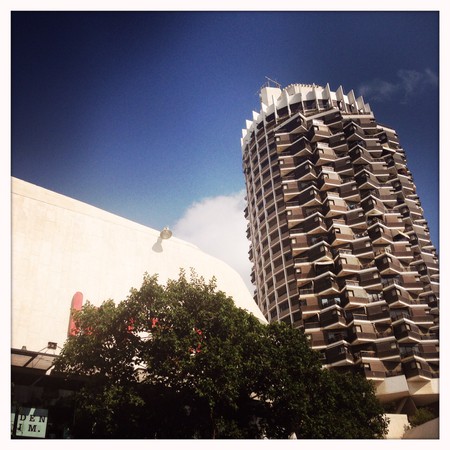 Dizengoff Center, at the corner ofKing George Street on the southern end, is Israel’s first shopping mall, which opened its doors for the first time in 1983. With more than 400 shops, a movie theater, fitness centers and its various entrances, stairways, skywalks and the underground passages that connect the two buildings on both sides of Dizengoff Street, it is not uncommon to get lost inside. Food lovers will enjoy the Food Fair that is held there every Friday.

From King George Street heading down toward the beach, Bograshov Street has a lively, young, and slightly underground flair. It is the ideal place to find sneakers, t-shirts or second-hand vintage clothing. For the perfect cheap-and-chic Tel Aviv street style look at local pop-ups, such as Aderet. A connection with the youth can also be found in the history of the street’s name-giver. Haim Bograshov, an Israeli politician who served in the Knesset between 1951 and 1955, helped establish the Herzliya Hebrew High School. He was one of its first teachers and later became the principal. 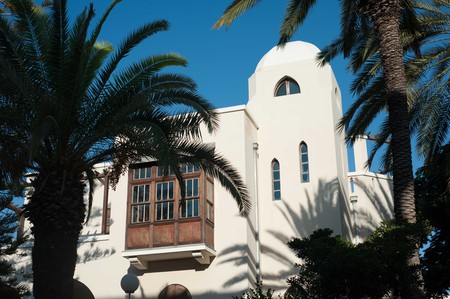 Bialik Street is named after Chaim Nachman Bialik, widely known as Israel’s national poet and a pioneer of modern Hebrew poetry. He contributed significantly to the revival of the Hebrew language by writing his works in Hebrew. Born in today’s Ukraine, he moved to Tel Aviv in 1924 when he was already a literary figure (and owner of a publishing house), and dedicated himself to cultural activities and public affairs. His home on Bialik Street is now a museum containing memorabilia connected to his life and work. It is also worth a visit because of its architectural style, combining European and oriental elements, such as its towers, terraces and tile-work. 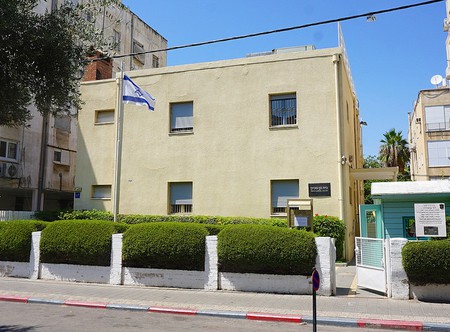 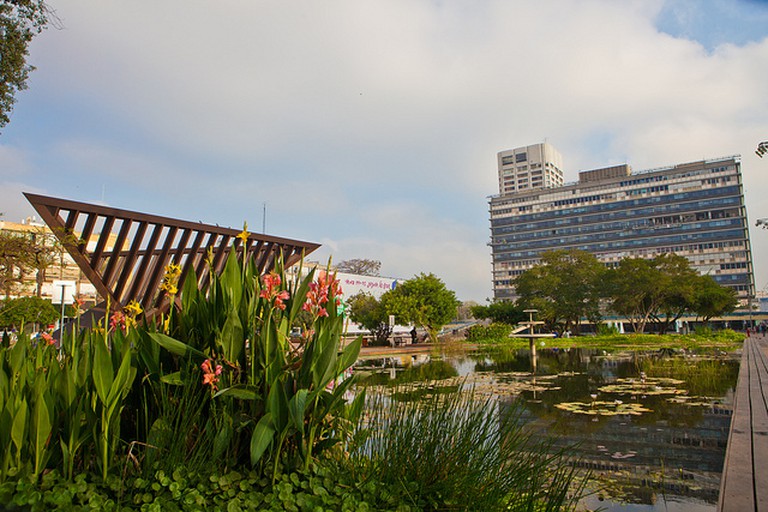 Rabin Square - Tel Aviv Jaffa | © israeltourism/Flickr
David Ben-Gurion is certainly one of the most important figures in the history of Israel, famous in his homeland and throughout the world likewise. Visitors to Tel Aviv come across his name for the first time the very moment the plane touches down at the city’s international airport. He is recognized as the primary founder of Israel since he signed the Declaration of Independence in 1948, and was appointed first Prime Minister of the newborn state. His political career spans over more than 20 years until 1968 when he resigned from his political activities. Traces of his life and work can be found in his residential home located in Ben Gurion Boulevard, a simple, cubic building from the 1930s that can easily be overlooked. It is now a museum open to the public in which visitors can take a glance at the living areas equipped with the original furniture as well as the library. Memorabilia, historical documents, and Ben Gurion’s titles awarded to him when he was prime minister, complete the exhibition in the house.
Open In Google Maps
17 Sderot Ben Gurion, Tel Aviv-Yafo, Tel Aviv District, Israel
+97235221010
Visit Website
Give us feedback

This large public square in the center of Tel Aviv, historically used for the public to congregate, was renamed Rabin Square in honor of former prime minister, Yitzhak Rabin. Rabin was assassinated there by an extremist after heading a peace rally in November 1995. Rabin became a symbol for the peace process, initiated with the signing of the Oslo Accords between Israel and Palestinian leader Arafat in 1992.

On the northern edge of the square on Ibn Gabirol street next to the City Hall, a small memorial marks the spot where he was shot. In recent years the square has been upgraded and there is now a fountain and an ecological pool in the middle, as well as a Holocaust memorial sculpture. An array of inviting cafés lines the square, giving it a welcoming feel. 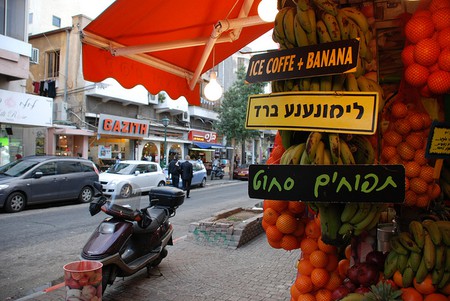 The trendy Sheinkin Street originated as the main street of this neighborhood’s craftsmen. The street was characterized by small factories and workshops. It was named in 1925 after Menahem Sheinkin, a Zionist who favored the integration of artisans as equally-valued pioneers. The street runs from Magen David Square to Rothschild Boulevard and is now one of the most stylish streets in Tel Aviv, despite its working class history. Local designer labels, boutiques, chic cafés and high-end restaurants have taken the place of the craftsmen workshops. As you wander around the shops you should look up to the buildings along the street. Most of them were built in the 1920s in the International style and, to a certain extent, manage to bring back a part of the atmosphere from the old days.