Tel Aviv Collage | Fipplet/Wikimedia
Tel Aviv is known all over the world for its magnificent architecture. From the very founding of the city up until the present day, architects have been creating unique and fascinating buildings. Culture Trip presents 13 must-see buildings in Tel Aviv.
The Crazy House Sambach/Wikimedia

Even before the Crazy House was constructed close to the Tel Aviv shoreline in 1985, it had been a point of contention; architect Leon Gaignebet had attempted to get a building permit for over seven years. The Crazy House is designed with two completely different sides, representing two ideas — two pieces of art. White, wave-shaped balconies cover the façade, which faces the sea, while the opposite side is made of sand, and trees grow right out of the wall. A painted fresco runs through the length of the building. Inside there are the massive pillars, each representing a different civilization.

Shopping Mall
Moshe Aviv Tower | Zairon/Wikimedia
The Azrieli Center is three towers of different shapes and has become both the symbol of Tel Aviv and a symbol of renewal for Israel. The construction started in 1996, and two of the towers were opened in 1999, while the construction of the square tower continued up to 2007. Although most of the Center is occupied by offices, there is a big shopping mall in the bottom of the center. The 49th floor is the Observation Floor, opened to the public each day except Monday. Eli Attia developed the original project, but the construction was completed under the supervision of Moore Yaski Sivan and David Azrieli himself.
More Info
Open In Google Maps
Azrieli Center Derech Menachem Begin, Tel Aviv-Yafo, Tel Aviv District, Israel

Building
Dan Tel Aviv Hotel | Chris Hoare/Wikimedia
Moshe Aviv Tower is the tallest building in Israel. Located in the Diamond Exchange District, the 68-floor structure is commonly known as City Gate. Architects Amnon Aviv and Amnon Shwartz were inspired by the famous Westend Tower in Frankfurt. The building was named after Moshe Aviv — the owner of the construction company, who died two years before the building was finished in 2003. 40-worker shifts enabled five stories to be built per month, so the construction took just five years. Nowadays offices and private apartments occupy the building. The Moshe Aviv tower was lit in bright pink light as the part of the campaign for breast cancer in 2004.
More Info
Open In Google Maps
Moshe Aviv Tower Ramat Gan, Tel Aviv District, Israel

Hotel
Jaffa Clock Tower | Jorge Láscar/Wikimedia
ReserveRead More
The rainbow-colored Dan Tel Aviv Hotel was built in 1953 by Yaacov Agam. The building is located along the Tel Aviv promenade facing the Mediterranean Sea. Originally, there was a small lodging called ‘Kaete Dan’ — the first guesthouse on the Tel Aviv shoreline. Two brothers, Yekutiel and Shmuel Federmann, bought the lodging in 1947, long before Tel Aviv became a popular tourist destination. They have turned a 21-room lodging into a chain of luxury hotels. The bright colors were added to the façade in 1986.
More Info
Open In Google Maps
99 HaYarkon Street, Tel Aviv-Yafo, 63432, Israel
+97235202525
Visit website

Building
The Marganit Tower | Daniel Maleck Lewy/Wikimedia
The Jaffa Clock Tower was built in 1903 to commemorate the 25th anniversary of the reign of Abd al-Hamid II, the Ottoman Sultan. The building process was organized by the citizens of Jaffa, both Jews and Arabs. However, more than a hundred clock towers were built for the same purpose around the Ottoman Empire. The colorful mosaic windows, which tell the story of Jaffa, were added in 1965 during the restoration process by Arie Koren. Nowadays there is also a plaque commemorating the Israelis killed in the battle for Jaffa during the Arab-Israeli War in 1948.
More Info
Open In Google Maps
14 Yefet Street, Tel Aviv-Yafo, Tel Aviv District, Israel

The Marganit Tower, located in the Hakirya district of Tel Aviv, was constructed in 1987. Only 138 meters high, it remained the tallest building in the area for more than ten years. Nowadays the tower takes 19th place on the list of Israel’s tallest structures. Although there are only 17 floors above the ground, most of the structure’s height is obtained by its ‘finger,’ which is occupied by transmission equipment. The tower was designed by ASSA Architects. 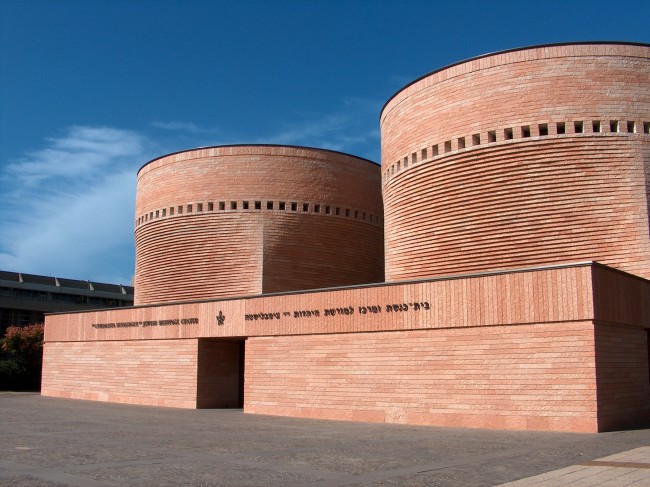 Building, Synagogue, University
Maine Friendship House | אניצילמתי/Wikimedia
The Cymbalista Synagogue, which is located on Tel Aviv University’s campus, was built in 1998 by Swiss architect Mario Bota. Two rectangular towers rise up from a square basement and merge into a circle at their highest point. Thus, the geometrical squaring of the circle is represented in stone. ‘Canopies’ at the top of each tower let the sun light inside the structure. They are reminiscent of the traditional Jewish canopy, the Chuppah. The Cymbalista Synagogue was a culminating project in a series of religious works by Bota.
More Info
Open In Google Maps
קרית האוניברסיטה תל אביב יפו, מחוז תל אביב, Israel
+97236408020
Visit website

Building, Museum
Dizengoff Center | Beny Shlevich/Wikimedia
The Maine Friendship House was built in 1866 by a small group of Christian restorationists from Maine, who established the American colony in Jaffa. The house was prefabricated in Whitneyville, Maine, and shipped to Israel as the future home of the Wentworth family. A small New England–style wooden clapboard building was doubled in size by a stone part in 1890. Jean and Reed Holmes restored the building in 2002 and opened it to the public. Nowadays, the basement of the house is occupied by Jonathan Kis-Lev art-studio, while the upper floor serves as a museum of the history of the American colony
More Info
Open In Google Maps
10 Auerbach Street, Tel Aviv-Yafo, Tel Aviv District, Israel
+97236819225
Visit website

Gym, Swimming Pool
Dizengoff Center, which is located in the heart of Tel Aviv, was the first shopping mall in the city. It has been a source of argument (is it genius or ugly?) ever since it was built in 1983. There are no floors in the common sense but a continuous gallery of shops going up in a spiral. The center was designed by Israeli architect Yitzkak Yashar. No matter the public opinion, the Dizengoff Center remains one of Tel Aviv’s favorite malls, with around 80,000 people visiting each week. Special events are held every Thursday and Friday.
More Info
Open In Google Maps
50 Dizengoff Street, Tel Aviv-Yafo, Tel Aviv District, 6433222, Israel
+97236201130
Visit website

Architectural Landmark, Building
Europe-Israel Tower | Wikimedia
The Pagoda House was built in 1924. The architect Alexander Levi, who was inspired by an American café, combined Oriental and Western style elements in this wonderful structure. Pagoda House is a private house. It was also the first private residence to have an elevator in Tel Aviv. Over the years, the building was slowly forgotten, until Swedish businessman Robert Weil restored it in the 1990s. The House received its name from the ornament on the rooftop.
More Info
Open In Google Maps
12-20 Nachmani Street, Tel Aviv-Yafo, Tel Aviv District, Israel

Building
Matcal Tower | Beny Shlevich/Wikimedia
Europe-Israel Tower is hardly noticed by the pedestrians, although it is a magnificent, wineglass-shaped structure. The 95-meter office center was erected especially for the IBM Company. According to Moore Yasky Sivan, the design of the tower is supposed to resemble a computer keyboard or a typing machine roller. The construction of the building took just 27 months. The building was completely renovated in 2002; most of its original look was saved. The tower has won several architectural prizes. A similar building — with the same wineglass shape — is the Rainier Tower in Seattle.
More Info
Open In Google Maps
מגדל שחר, 4 אריאל שרון, תל אביב יפו, מחוז תל אביב, Israel
+972747922300
Visit website

Bridge, Building, Opera House
The Opera House | ד"ר אבישי טייכר/Wikimedia
The Matcal Tower is another architectural masterpiece by Moore Yaski Sivan and is the home of the Ministry of Defense. The 107-meter building was erected in 2005 and has replaced the old ‘Building-22.’ The aluminum oval core was designed to withstand high impact collisions of all kinds. There’s a helipad on the roof, which is probably the most recognizable element of the building. The helipad on the Matcal Tower is similar to the one on the Arison Medical Tower in Tel Aviv. The pedestrian bridge, which connects the tower with the Azrieli Mall, was added in 2003.
More Info
Open In Google Maps
Matcal Tower Tel Aviv-Yafo, Tel Aviv District, Israel

The building №1 on Allenby Street is the Opera Tower. It was constructed by Moore Yasky Sivan Architects in 1993. This postmodern building of granite and ceramics replaced the original Tel Aviv Opera House. Inside the building, there is a fitness center, a mall, and a cinema theater, while the upper floors have luxurious apartments. A private swimming pool is situated on top of the tower’s platform. The design of the ground floor is an homage to the original Opera House building. The Israeli Opera is now located at Shaul Hamelech St 19, Tel Aviv.

Maria is originally from Saint Petersburg, Russia. She came to Tel Aviv in 2009 for the first time and fell in love with the city at first glance. After four years, Maria moved to Israel as an engineer student at Tel Aviv University and has no plans to leave Israel.