11 Things You May Not Know About Hanukkah 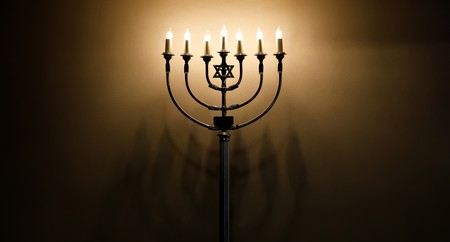 Hanukkah, or the Festival of Lights, is a widely celebrated Jewish holiday that marks the defeat of the Seleucid Greek rulers of the land of Israel in the second century B.C.E by the Maccabeans. While many know it as the holiday of dreidels and menorahs, there is much more to it than that. So, whether you’re a complete stranger or a veteran observer, here are 11 things that may surprise you about this Jewish holiday.

Hanukkah is the only Jewish holiday not in the tanach

The tanach (the Hebrew bible) contains no references to Hanukkah. No one really knows why, but some speculate that it was a decision made by rabbis so as not to provoke the Romans. Oddly, the story of Hanukkah is found in the Christian Bible but not the Jewish one.

It is not the “Jewish Christmas”

Many people, Jews and non-Jews, equate Hanukkah with Christmas and perceive it as some form of “Jewish Christmas”. However, this is a distortion of the holiday’s meaning, which is largely a result of the Americanization of Hanukkah by U.S. Jews. So their children wouldn’t feel left out as their friends received presents over Christmas, American Jews began the tradition of giving material gifts for Hanukkah. It has therefore adopted a position of elevated importance among American Jewry, akin to Christmas for Christians.

It is not considered a holy holiday in Israel

In Israel, Hanukkah is not treated with as much importance as it is in the United States. While it is celebrated throughout the country with the lighting of the menorah, traditional foods, and family-orientated events (kids get the week off school), adults only get one day off work, and it is generally treated as less of a big deal.

Dreidels are synonymous with Hanukkah. The game involves spinning a little piece with a letter on each of its four sides; you win or lose depending on what letter it lands on. Interestingly, this classic Hanukkah game was inspired by a virtually identical game played by Germans over Christmas, which itself was influenced by a British game called teetotum. 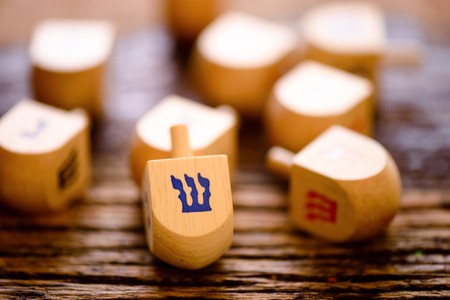 Hanukkah falls on the same date every year

Technically speaking, Hanukkah takes place every year on the same date – the 25th of the month of Kislev in the Hebrew calendar. However, the Hebrew calendar and the Gregorian calendar are very different, which is why for most of us, the Festival of Lights occurs anywhere between late November and December.

Did you know that the largest ever menorah was unveiled on 29 December 2005, opposite Central Park, New York? It measured a whopping 32 ft (9.7 m) tall and 28 ft (8.5 m) wide. The record for the most dreidels spinning simultaneously for at least 10 seconds is 734, set by the United Synagogue Youth in Philadelphia in 2011.

It’s all about the donuts

Donuts, or sufganiyot in Hebrew, are eaten like there’s no tomorrow during Hanukkah, especially in Israel. As far as a month before the celebration even begins, Israeli cafes and supermarkets begin selling these deep-fried delights. Roladin, a bakery chain in Israel, are known to make excellent and highly varied sufganiyot, all filled with different treats. 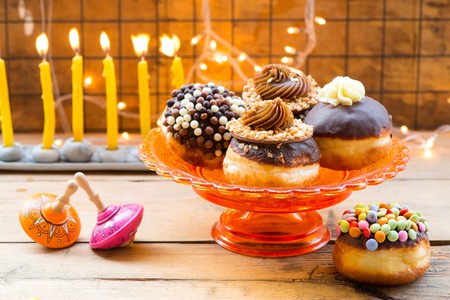 And the latkes (just not in Israel)

Latkes are delicious deep-fried grated potatoes originating from Eastern European Jewish communities. They are a staple in Ashkenazi families over Hanukkah, but Mizrachim (Jews of eastern origins) don’t tend to eat them. This is partly why latkes aren’t so common in Israel, where Mizrachim make up a significant portion of the population. An article in the Jewish Chronicle suggests that sufganiyot have kicked latkes out of the Israeli Hanukkah tradition.

Hanukkah cuisine isn’t limited to these

While many people think latkes and donuts are the only foods traditionally eaten over Hanukkah, there are several variations depending on ethnicity and nationality. For example, Greek Jews traditionally make a fried fish; Cochin Jews of India prepare a fried sweet cake; and Syrian and Lebanese Jews make deep-fried pancakes packed with cheese. The common denominator is oil, but the dishes are diverse! 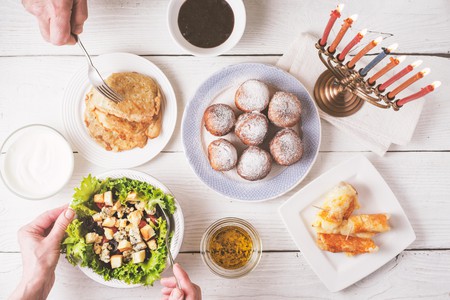 Another Hanukkah tradition that is slightly less known about is the eating of cheese. One subplot in the story of Hanukkah (as stipulated in the Book of Judith) is the beheading of an enemy Assyrian general called Holofernes by a Jewish widow. How did she do it? By getting him full on alcohol and cheese until he passed out. Her brutal murder is said to have frightened the Assyrian soldiers into retreat. So, Jewish cheese lovers, this is truly a holiday you can get on board with.

Yes, you read that correctly. First introduced over Hanukkah in 2016, Burger King in Israel came up with a special donut burger (SufganiKing). It’s a normal Whopper hamburger but with donuts replacing the buns, and ketchup replacing the normal jelly donut filling. Sounds delicious, right?