TED Talks By Israeli Women Everyone Should See 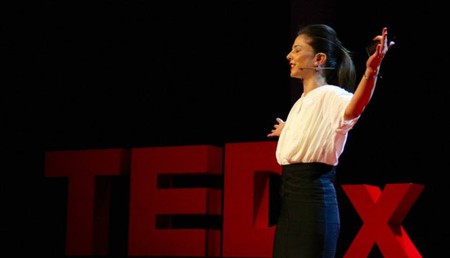 In the 21st century you don’t need to move further than your couch to get inspired. In the last 30 years of TED’s existence, the demand for talks from brilliant and creative individuals has increased globally with the TEDx initiative, the ability to organize an independently run a TED event any place you chose. Let’s take a look back at some of the best TED talks by Israeli women everybody should see.

Maya Gelfman| Creating out of not knowing

Maya Gelfman is a visual artist and a graduate of Shenkar Academy in visual communication. Born in 1978, Gelfman lives and works in Israel as a successful visual artist. Having exhibited in five solo shows and participated in numerous group exhibitions such as the notable Tel Aviv and Haifa museums of Art and in Tokyo and New York, she was invited to speak at a TEDx about her exhibition SPARK. Gelfman delves into the the concept of new and change with the premises being, ‘new = is something that I haven’t met yet. Change = is the process of something becoming different – a non stopping occurrence and surprise = is to not know what is coming.’ This is an artistic talk that will be sure to inspire.

An absolutely heartbreaking and inspiring story of an Israeli mother Robi Damelin of ALLMEP Member Parents Circle-Families Forum, whose son David was killed by a Palestinian sniper while he was guarding a checkpoint near a settlement during his army reserve service. Damelin is an active member of a group of 500 Israeli and Palestinian families who have lost family members and who work together for reconciliation and a just resolution to the conflict. She speaks with a Palestinian partner in communities and schools throughout Israel and the Palestinian Territories, as well as internationally.

Keren Leibovitch is a champion swimmer. The three-time World Champion, five-time European Champion and seven-time Paralympic medalist is considered one of Israel’s greatest Paralympians. Leibovitch began swimming when she was 2, but was paralyzed from the waist down when she was 18 while training to be an IDF officer. During a training drill, she was carrying a heavy load which caused her back to nearly break. Although she had trained professionally before her injury, she did not begin to compete until after her injury. While swimming as part of her rehabilitation, Leibovitch was spotted by a coach who encouraged her to begin training competitively.

Tsipor Maizlick is the owner of a “Consciousness Coaching” business, serving as Master Coach, supervisor and mentor for entrepreneurs, businesses and teams in Israel and in the world. Maizlick, a member of the Israeli Coaching Association, holds a bachelor’s degree in psychology and specializes in communication skills training, relationship and crisis management. Together with her business partner Ayelet Hashahar Saidoff, they are currently developing, teaching and integrating women management skills with entrepreneurs, small businesses and organizations. Maizlick became ill with an autoimmune disease and paralyzed, got a dissent practice of her own preaching and discovered the power of intention for healing and for creating exceptional results. Her Tedx Talk describes the belief that our reality is a creation of our consciousness being molded over time by our language, choices, actions and relationships.

Yiscah Smith| 40 Years in the Wilderness

Yiscah Smith is a renowned Jewish educator, spiritual mentor and author, both in Jerusalem and abroad. Smith’s life has been an inspiring and courageous journey with the struggles of her own spirituality, gender identity and commitment to living a life of authenticity. After her own transgender journey she recently published her memoir, Forty Years in the Wilderness: My Journey to Authentic Living. Smith lives in the Jerusalem neighborhood of Nachlaot. She teaches classes in Jerusalem and online on the inner meanings of both classical and contemporary Jewish texts, emphasizing the Torah’s spiritual insights. This incredibly frank and emotional talk describes the joys and struggles in the journey to her own authentic living.

Dr. Yael Porat, is founder and CEO of BioGenCell Ltd, a biotechnology company in the field of stem cell therapy and regenerative medicine. BioGenCell is developing a groundbreaking technology platform for automated production of patient-specific, blood-derived stem cell-based therapies that will enable physicians to treat patients the day after diagnosis. Since 1995, Dr. Yael has established a career in biotech companies as an innovator, scientist and director at start-ups and pharmaceutical companies.

Inbar Amir is an artist and an educator from Jerusalem. Her artistic work ranges from acting and directing to scriptwriting and playwriting. Amir also uses theatre as a medium in workshops she leads on conflict resolution, public speaking and group dynamics. Additionally, she frequently writes and performs Tailor-Made according to Size performances, plays that run only once in unique locations throughout the country, intended for specific audiences. Amir wrote, directed and acts in the play Just be You that engages with the age-old question of what it means to be a woman. The play has been performed at numerous festivals throughout Israel and broadcast on national radio.

How did you start your life and become the person you are today from a single cell? In what way can developing embryos teach us how to treat diseases? Watch this TEDx Talk given by Weizmann Institute’s Dr. Karina Yaniv whose research into the origins of the lymphatic system has gained and resolved critical insights. The global science community had their eyes on Rehovot, where a team of Israeli scientists, led by Dr. Yaniv, managed to grow lymphatic cells in the lab for the first time. For over a century, scientists have debated the question of the origins of the lymphatic system – a parallel system to the blood vessels that serves as a conduit for everything from immune cells to fat molecules to cancer cells.

Orit Perlov, a social media expert at the Institute for National Security Studies, follows and analyzes the discourse on the social networks in Arab states. Prior to joining INSS, Perlov served as a political advisor to the Israeli Ambassador at Large based with the informal Israeli mission in the GCC. She is the former co-editor of the Israeli Foreign Ministry website in Arabic. Orit has conducted interviews with Channel 2, Channel 1, Channel 10, I24, Galei Zahal, BBC Radio and Al Jazeera. Her work has appeared in publications including Haaretz, Maariv, Globs, Al-Monitor and New York Times. Perlov analyzes the discourse of social networks in the Arab world.

Shirin Hafi serves as the Principal of the Ort Arabic High School in Lod since 2009. She speaks Arabic, Hebrew and English. She has been a teacher and classroom educator since 1997, specializing in Hebrew literature and writing. In September 2008, she was a moderator at the Ministry of Education’s LBM project, which included participants from 11 schools. Hafi’s TEDx Talk tells the story of ‘the education for hope and hope for education.’ This can powerfully change a community and even reality. This is the story of Ort, an Arab school of engineering science in the city of Lod. This school refuses to give up on its students and their right to dream and succeed.

Rory Allweis is, in her own words, an artist because she paints pictures. She began teaching children because of a lack of teachers during the Yom Kippur War. By a stroke of good luck, she found herself teaching in the Youth Wing of the Israel Museum, where there was a very special atmosphere of creativity, freedom and support. Allweis allowed herself to develop and present ideas to children that she believed in. Mainly, that art must have a foundation based in feeling. Throughout the years she has insisted that teaching art requires compatibility to each person’s direction so it can remain an individual expression. Allweis delivers a spirited and inspiring talk about discovering how she wants to teach. Knowing that emotion is often her own inspiration for art, she found various ways to encourage children to get in touch with their emotions and express them visually. Allweis’ playful approach connects students with their own inner artist.