In addition to its beaches, vibrant nightlife, bohemian cafés and artisan markets, Tel Aviv harbours a ‘White City’ – the residual gems of the Bauhaus design movement, whose structures contribute a striking impression on the city’s skyline. Though many of this UNESCO World Cultural Heritage Site’s buildings have fallen into disrepair, their once-gleaming facades graffitied or turned grey, many of the original 4000 Bauhaus buildings have been restored to their former glory.

The Bauhaus movement originated in 1919 in Weimar, Germany and pioneered the modernist ideology that draws intimate connections between aesthetic and social sensibilities. The movement successfully injected artistic creativity into industrial manufacturing, at the same time grounding fine art with purpose and functionality. Furniture, graphic design and architecture became outlets for a commitment to a purposeful, united, innovative community where individual creativity was valued alongside efficient production.

When many of the Jewish Bauhaus architects, hailing from across central and eastern Europe, arrived in British Palestine, having fled from the increasingly popular Nazi ideology, they brought the Bauhaus design principles with them, and endeavoured to realise what they could not in their home countries: a city designed from the ground up, constituted by smooth-lined, universalist structures. Modern Tel Aviv was only 20 years old, the first stone laid in reclaimed swamp land near Jaffa Port in 1909, and almost all of the public and commercial buildings erected in the 1930s followed the Bauhaus style. In 2003 UNESCO declared The White City a World Cultural Heritage Site, for its status as the largest concentration of Bauhaus buildings anywhere in the world.
Many buildings across the country realize a unique Israeli-modernist style, inspired by Bauhaus designs but adapted to the particular environment. On such example is the eminent Engel House at 84 Rothchild Street – the very first Israeli structure built on stilts, to create an illusion of open space in dense cities. The renowned architect, Ze’ev Rechter, innovated with protruding window frames to substitute for the wide windows favoured in Europe, unsuitable to Israel’s climate. Both these features are now common to almost all Israeli buildings, but the original has been neglected and its now-brown façade is underwhelming to behold. Hearteningly, the city municipality are in the process of restoring over 1000 buildings across the city, but for now, the following 10 buildings are the best examples of the inimitable architectural originals of the White City. 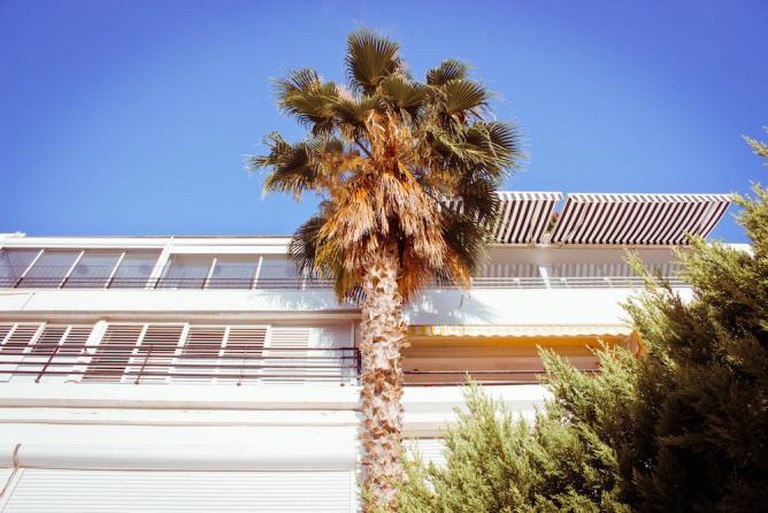 Kiriyaty House | © Juliana de Albuquerque
For those familiar with the recognisable design of Israel’s residential blocks, the architecture of Kiriyaty House on Ruppin Street may not immediately impress. However, the simple symmetry of the building spanning three blocks has been highlighted by the architect, Shmuel Mistazkin, for being one of the closest buildings in the city to truly embody the Bauhaus spirit, its horizontal balconies and vertical stairwells perfectly emphasising the careful geometrical proportions. Mistazkin is one of the last of the 1930s Bauhaus architects still active in Tel Aviv, and a well-circulated story tells of his entrance exam to Bauhaus University in Germany, during which he was instructed to make something useful with a piece of cloth. He fashioned a rope, and claimed its purpose was to hang himself, if his admittance exam was unsuccessful. As his prolific architectural output is a testament to, he never did have occasion to use it! 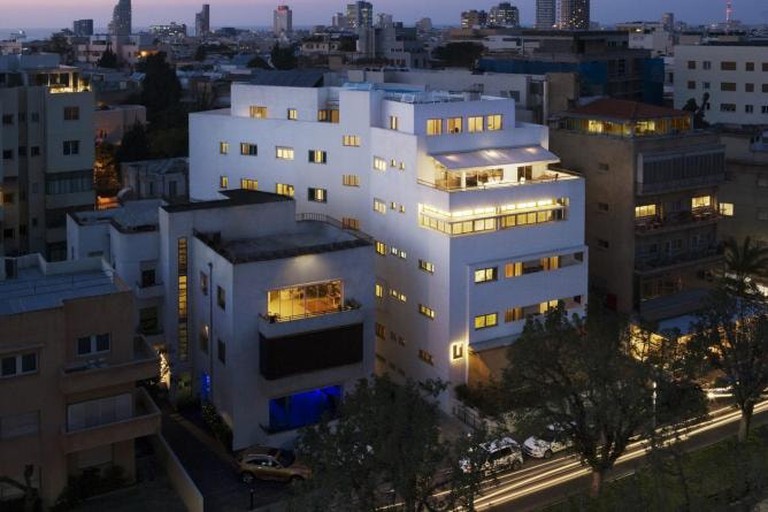 Krieger House | Courtesy the rothschild 71 hotel, Tel-Aviv
One of the most visually pleasing buildings is Ze’ev Rechter’s Krieger House on Rothschild Boulevard. Built in 1934, its lines are clean and controlled, and its distinctive features are the enveloping sunken balconies, which create dark recesses at defined places on the bright surface. The building itself has been carefully renovated by the Krieger family into a boutique hotel, preserving some of the original interior features, and sustaining the light and uplifting feel of the Bauhaus design. 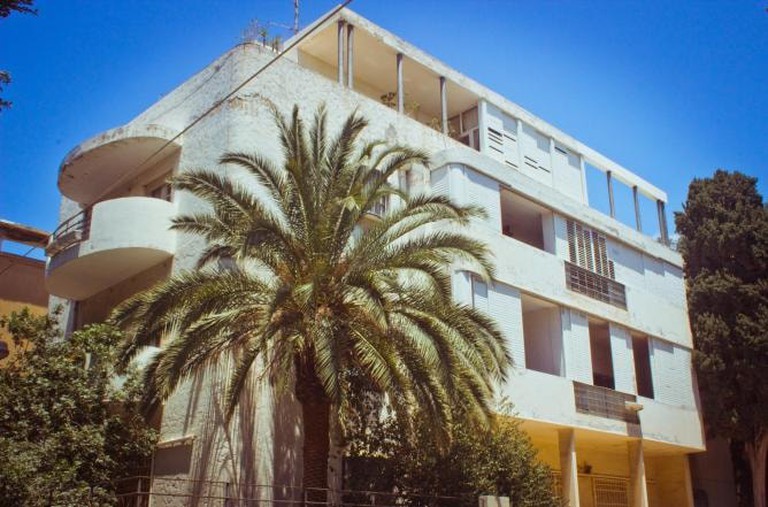 Dunkelblum House | © Juliana de Albuquerque
Another gorgeous design is Oscar Kaufman’s Dunkelblum House, elevated on a rounded podium, flanked by two stairways, on a quaint, quiet street. The house itself is elegant and undemanding in its appearance as a hollowed box, broken only by wide openings and protrusions of curved convex windows contrasting the straight lines. Kaufman is still known for his work designing theatres in Europe, but despite designing the Habima Theatre in Tel Aviv and a cinema in Haifa, he never received the same level of celebrated recognition in British Palestine, and so returned to Europe in 1939. Though Kaufman struggled through the austerity of the Second World War, he survived the Jewish deportations, and his last work, the renovated Madách Theater in Budapest, was completed after his death in 1956. 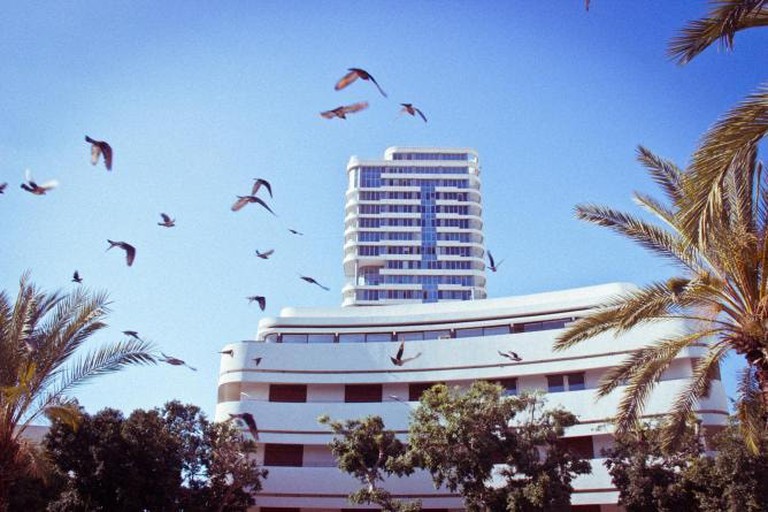 Cinema Hotel | © Juliana de Albuquerque
Zina Dizengoff Circle was the first ‘square’ designed in the city, in 1934, by architect Genia Averbuch, who had won a competition to secure the tender. All the buildings around the square were carefully planned to form a circle, and each showcased the neat lines, orientations and spaces of Bauhaus architecture. Though this White City landmark has since gone through numerous renovations of differing scales, some original buildings remain fully preserved, including the Esther Cinema, now a boutique hotel with a nostalgic, film-themed interior design paying homage to the building’s origin as one of the city’s first cinemas. The building’s towering, balcony-lined, curved structure was designed by architect Yehuda Magidowitz in 1930, and opened with its first showing of Snow White and the Seven Dwarfs in 1931. Magidowitz, Tel Aviv’s Chief Engineer from 1920-1930, emigrated from Ukraine and was known as a visionary whose innovative designs were often commissioned by the early entrepreneurs. 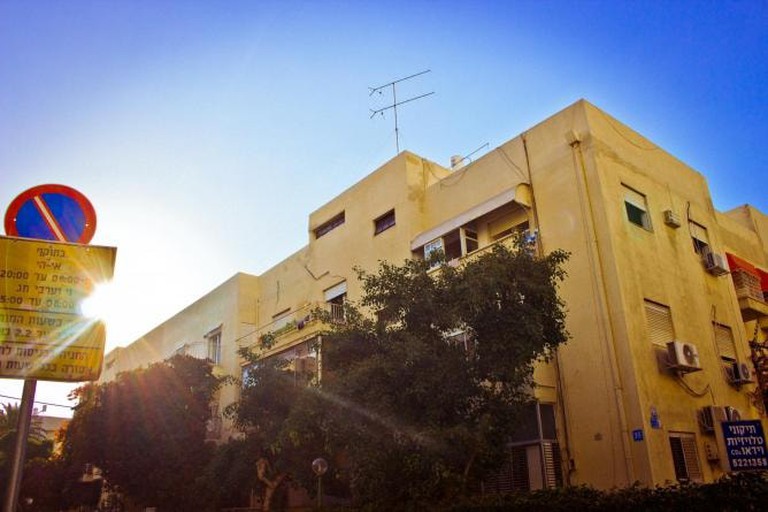 Workers Residence Hod | © Juliana de Albuquerque
In contrast to the private homes designed for the bourgeois emigrés, the Hod Workers’ Residence, designed by Arieh Sharon, himself from a socialist kibbutz upbringing in Palestine, was constructed with the ideology of the labour movement in mind. The concept of the commune building, and its physical manifestation on Frishman Street, encapsulate all the Bauhaus values of functionality, simplicity, universalism and equality. The building itself is more minimalist in style than other Bauhaus examples in the city, and consists of a long continuous structure around a courtyard and common garden. The apartment block’s original designation included a ground floor containing a dedicated social space, a kindergarten, reading rooms, a general store, a doctor’s clinic, and other essential communal spaces. Arieh Sharon inherited his commitment to ‘social architecture’ not only from his kibbutz but also from the social architect Hannes Meyer, under whom he studied at the Bauhaus University, before returning to make his mark on his homeland. 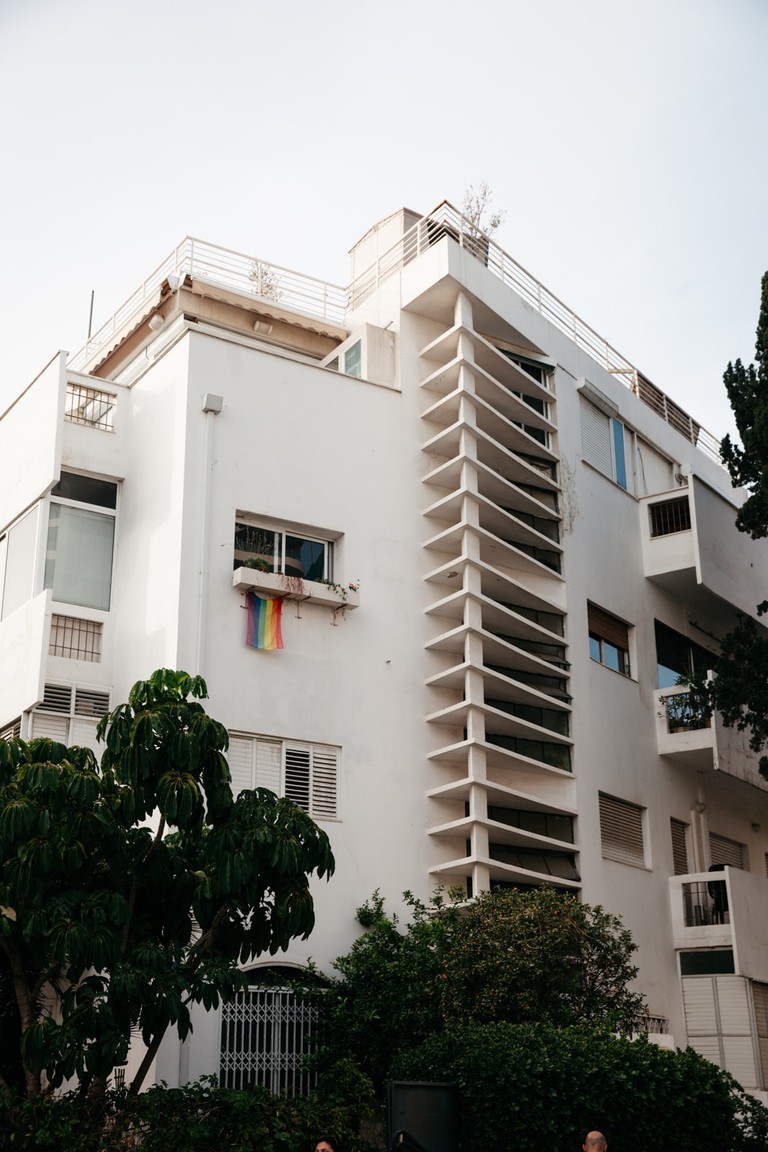 Kimberley Grant / | © Culture Trip
Down Frug Street lies the distinctive and aptly named Thermometer House, built by Yehuda Liolka. The peculiar slatted openings along the inside stairwell were an embellishment designed not for the aesthetic interest, but, of course, for functionality, allowing light to stream onto the staircase during daytime hours so as to preserve electricity by making the best use of natural light. The architect has also paid careful consideration to climate sensitivities, and provided raised banisters along the balcony protrusions, serving both as a banister and as a much-needed shade for this social space, used throughout the day by residents. 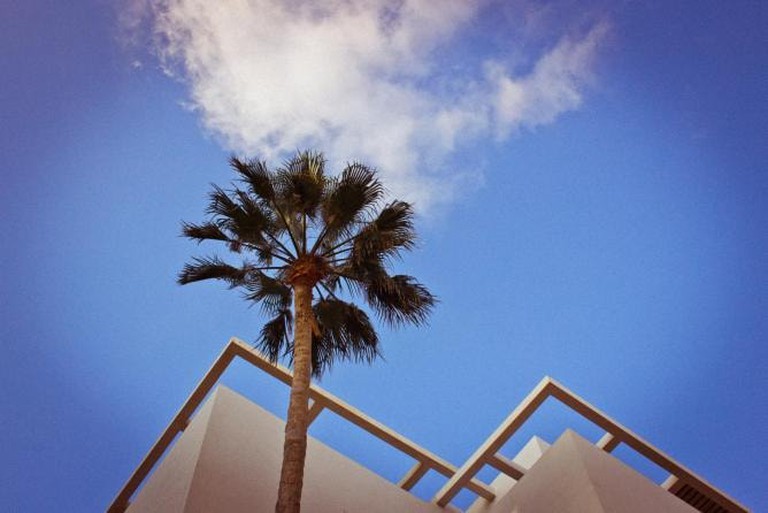 Zlatopolsky House | © Juliana de Albuquerque
Though he in fact never studied at the Bauhaus University, Dov Carmi, who won the Israel Prize for architecture in 1957, created some of the city’s most striking Bauhaus structures. Zlatopolsky House on Gordon Street is a prime example of his work, built with immaculate white face accentuating the simple cubic geometry, in the same style as so many of his urban villas. The architect himself resided in this building, its sharp lines somehow projecting a welcoming gentleness. Its unique features are crafted yet subtle, such as the pillars raising the entrance to the house and the small round ventilation openings of the balconies.

Building, Store
Facebook
Email
Twitter
Pinterest
Copy link
Share
This arc-shaped public building was designed with both careful purpose and creativity by Joseph Neufield. The façade reflects the function of each floor, from the sterile minimalist design of the laboratories and medicine store of the lowest two floors, to the slightly embellished, deeper colour of the upper floor, highlighting the importance of the management level. Unlike the plain white plaster characteristic of many Bauhaus buildings, the exterior of the centre is coated with four different types, the colours working through white, a dusty sandstone and a pale rust. The building is striking in its novelty, and yet succeeds in channelling design principles through the more recognisable, shiny white, minimalist structures. 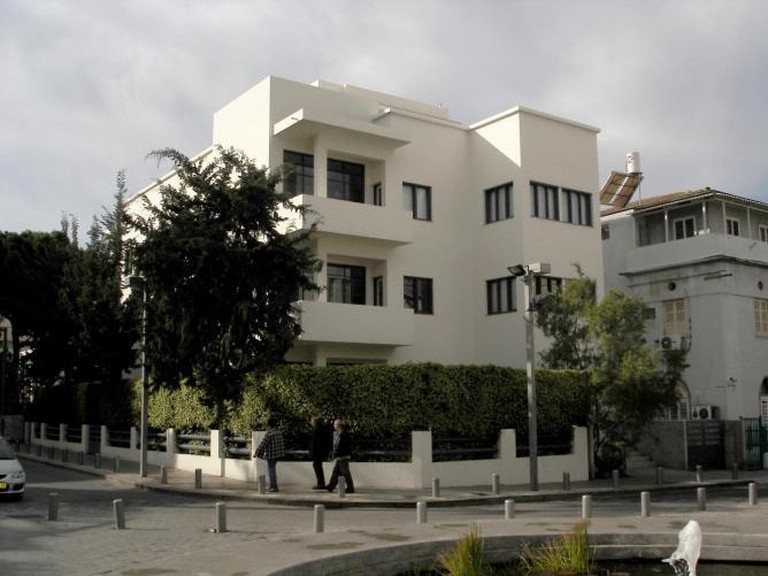 Shomo Yafe House | Photo by FLLL via wikicommons
Bialik Street is home to many an architectural wonder, and standing proudly on a corner of an open circle at the crossroads is Shomo Yafe House – a balanced cubic structure that was outlandishly innovative contrasted with the traditional buildings alongside side when it was erected in 1935. The building has been perfectly preserved, its prominent feature being the unique shaded balconies, supported by a continuous square of vertical and horizontal pillars. The architect, Shlomo Gepstein, was both an activist and a businessman, and his provocative spirit is evident in his stark and audacious design. 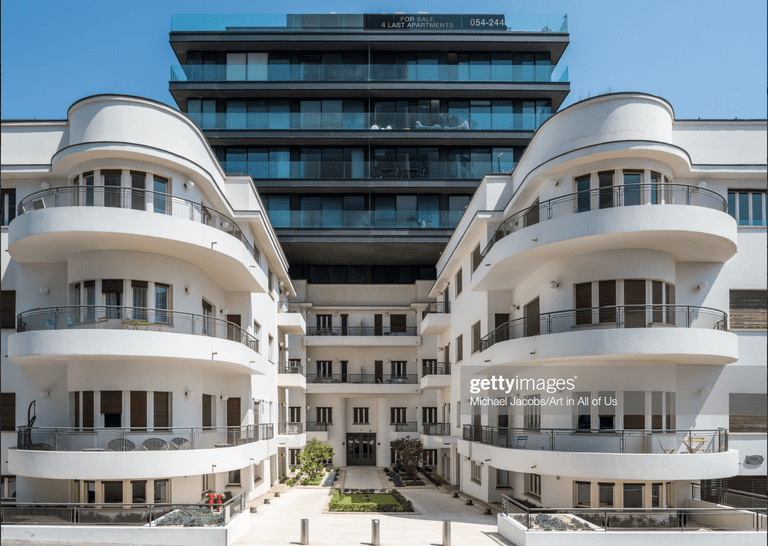 Tel Aviv’s most unusual Bauhaus renovation is the fusion of original architecture with a spectacular high-rise structure, at 96 Hayarkon Street. The iconic original was built by Pinhas Bizonsky in 1935, shaped in a symmetrical ‘H’ structure, with beautiful curved balconies along the protruding ‘legs’ and arresting clean lines across the straight central wing. The impressive building has housed many an important cultural and political figure, and is now under the ownership of entrepreneurs Shlomo Grofman and Zalman Shoval, each with their own connection to this piece of historic real estate. The new, ultra-modern addition towers at nine floors-high, above the original Bauhaus architecture that has been so meticulously renovated and reconstructed. The lobby of this outstanding building regularly hosts art exhibitions, celebrating the ongoing developments in the Israel design world. Another of Bizonsky’s creations is the more humble Reuven Rubin House, also now home to a permanent art collection.

For more incredible historic photographs of Tel Aviv, visit Pri-Or Photo House (Zalmania) at Tchernikhovski St 5,. The family-owned shop has been curating the photography archive since 1940, and is the oldest, and one of the most significant of its kind.