Hebrew and Arabic both share Semitic roots and thus bear many similarities. In addition, a plethora of Arabic words have been incorporated into everyday Hebrew discourse in Israel, usually as slang and often with slightly different connotations. Here are the most commonly used words you should know.

Ahlan means ‘hello’ in Arabic and is frequently used by Israelis. It is akin to saying ‘hey’ and is less formal than saying ‘shalom’ to greet someone.

Achla, aside from being the name of one of Israel’s leading hummus brands, means ‘great’ or ‘superb’ in everyday Hebrew discourse. ‘I reserved a table at the restaurant for us on Thursday.’ ‘Achla!’

In Arabic, ars means a pimp. In Hebrew, ars or arsim (plural) has come to describe a certain social class of Israelis who are loud, obnoxious and generally lacking in class. It’s a word with derogative connotations, so don’t go around blurting it out at people!

Fadicha is an Arabic word for ‘shame’. In colloquial Hebrew, it is used to describe an awkward or embarrassing situation or moment. You drank too much and vomited at the party? Eizeh fadicha (‘how embarrassing!’).

Halas in Arabic is used to say ‘that’s it’, ‘it’s done’, or ‘I’m done with this’. In colloquial Hebrew, it has slightly different connotations and is used to say ‘enough!’ or ‘stop it’.

The word kef – which means ‘fun’ in Arabic – is extremely common in everyday Hebrew and carries the same meaning. ‘Eizeh kef’ is the most frequently used expression, which means ‘what fun!’, while b’kef is a popular way to reply to being thanked, similar to ‘with pleasure’ or ‘gladly’. Yom Kef, moreover, is how a ‘fun day’ is described in Hebrew. ‘Are you working today?’ ‘No, we have a yom kef!’

Pronounced ‘mabsoot’, this Arabic word means happy, content or satisfied and is used commonly in Israel. It can be used in various contexts: you can describe yourself as ‘mabsut’ whether you just got a pay raise or the girl you like just texted you back.

Sababa is one of the most popular words in Israel and is usually the first word that Birthright kids learn when they visit the Holy Land. It derives from the Arabic word tzababa, which, according to Ha’aretz newspaper, means ‘great’ or ‘excellent’ in spoken Arabic. In colloquial Hebrew, sababa is a flexible word that can mean ‘cool’, as in ‘I’m cool with that’, as well as an adjective to describe something as cool. It is also often used to say ‘alright’, as in ‘sababa, no problem’. 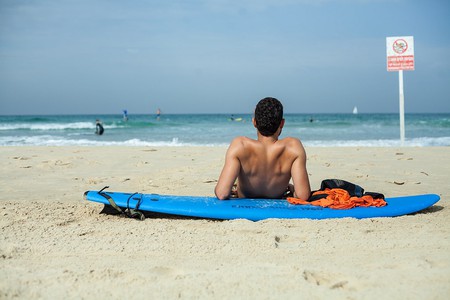 A ‘sababa’ moment on a Tel Aviv beach | © StateofIsrael / Flickr

Walla (‘by God’ in Arabic) is used all the time in Israel. It is used to convey a feeling of surprise or happiness, similar to ‘wow!’ For instance, you might tell someone you recently got engaged, to which they might reply with ‘Walla! Mazal tov!’

Yalla is probably the most commonly used Arabic word in everyday Hebrew. It is used by both Israeli Jews and Arabs to say ‘let’s go’ and encourage someone to do something. It can be used in a variety of contexts. Drunk youngsters might exclaim ‘yalla balagan!’ (balagan means ‘mess’ or ‘disorder’) before taking shots of liquor, and a mother might say to her kid ‘yalla finish your food’. Also, many conversations end in ‘yalla bye’.