‘Welcome To Iraq’: A Celebration Of Iraqi Art At The Venice Biennale

The Iraq Pavilion at the 2013 Venice Biennale is titled Welcome to Iraq. It features the work of eleven contemporary artists living and working inside Iraq. Their work gives voice to two different generations in a wide variety of mediums. The Pavilion has a marked importance in reasserting the country’s importance within contemporary art, this being only the second time Iraq has held an exhibition at the Venice Biennale. 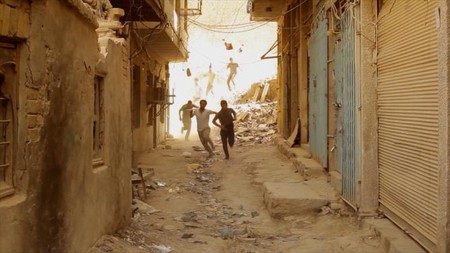 Welcome to Iraq is designed to immerse the visitor in the everyday world of Iraq. The viewer can sit, read and learn about the country’s culture, with books and comics included amongst the exhibits. Hospitality is an important national value and this is reflected in the Pavilion which manifests itself as a home in certain ways; each visitor is offered tea upon arrival, encouraging them to peruse the exhibits at their own leisure. The exhibition’s core emphasis, however, is on the country’s determination ‘to make do and get by,’ an inventiveness borne out of necessity in extraordinary historical circumstances. 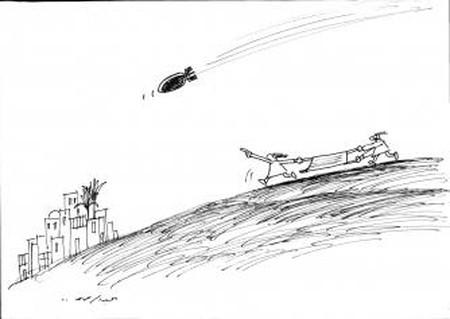 After decades of war, Iraq now suffers from an almost complete lack of cultural infrastructure. As a result, curator Jonathan Watkins, Director of the Ikon Gallery, Birmingham, and commissioning body The Ruya Foundation for Contemporary Culture in Iraq (RUYA), had to employ a rigorous selection process, travelling the country to carefully handpick each of the artists featured. There were no leading curators, critics or established art committees available for consultation; all research had to be done from scratch.

‘The logistics of this project have been daunting,’ says Watkins. ‘The security required for research – bullet-proof cars, soldiers, bomb-proof accommodation etc. – is just the beginning of the story. Then there is the business of negotiating travel arrangements for the artists (visas and so on) and transport out of a country that is peppered with checkpoints. The artists we met, on the whole, were incredibly generous and gracious. They were as candid about their circumstances as they were hopeful for a better future in which they can be more in touch with the outside world. They work in terrible isolation, but keep on going.’ 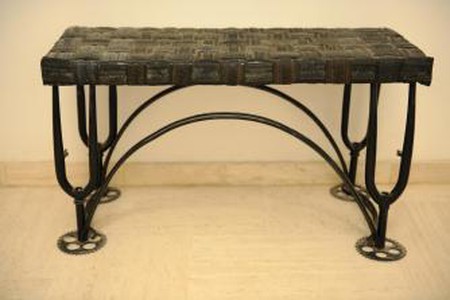 Akeel Khreef, 2, 2012 | Courtesy of the Artist and RUYA Foundation

While Iraq’s 2011 Venice Biennale Pavilion solely showcased artworks by Iraqis estranged from their homeland, all having fled the country some forty years ago (prior to the Iran-Iraq war), this year’s exhibition looks to propel the work of artists living and working in Iraq today onto the international stage for the first time in 35 years. This mirrors RUYA’s mission – to aid and enrich culture in Iraq, nurture a multicultural dialogue and foster international relations via the arts.

The exhibition highlights Iraqi creativity in all forms, at every level of society. Among the exhibitors are painters, photographers, film artists, sculptors, and draughtsmen. Publishing his work in national and international magazines since 1970, Abdul Raheem Yassir (b. 1951, Qadisiyah, Iraq) is a leading political cartoonist. Each scene he presents is a darkly humorous reaction to the absurdity of everyday Iraqi life. 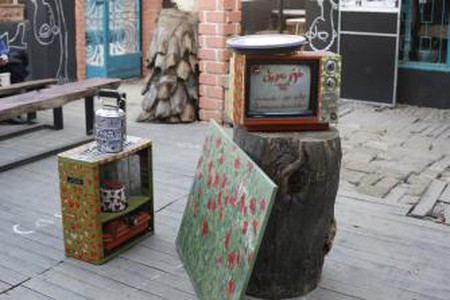 Furat al Jamil (b. 1965, Mainz, Germany but lives and works in Baghdad, Iraq) is a filmmaker who exhibits one of his rare sculptures at the Pavilion. Honey drips into a broken antique pot, conveying a sweet sadness for Iraq’s current state whilst inspiring hope in the possibility of healing and new life. Akeel Khreef‘s work (b. 1979, Baghdad, Iraq) is more literal. His sculptures are made from discarded materials in reference to Iraq’s severe lack of ecological awareness.

Saddam is Here is a popular photographic series by Jamal Penjweny (b. 1981, Sulaymaniyah, Iraqi Kurdistan). It is made up of images of Iraqis in everyday places – on the street, in hotel rooms, in shops – holding a photo of the former dictator over their own faces, demonstrating the lasting impact of his brutal regime. 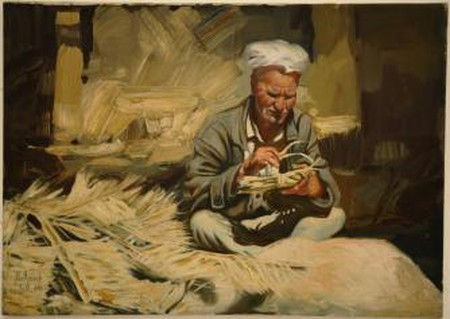 Buzz, a short film by Hareth Alhomaam (b. 1987, Baghdad,Iraq), exemplifies the stilted, mediated nature of communications between the sexes in modern Iraq despite the advent of social media. Another filmmaker included in the exhibition is Ali Samiaa (b. 1980, Baghdad, Iraq) who responds to traditional values held in relation to marriage, family and extra-marital affairs. 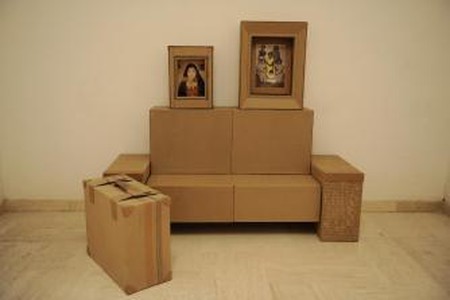 Despite being among the youngest artists featured, Bassim Al-Shaker’s (b. 1986, Baghdad, Iraq) work is stylistically one of the most traditional. He paints idealistic scenes of the southern marshlands, suggesting a lifestyle there of unbroken tradition. His art falsifies reality, these landscapes having been severely damaged under Saddam’s dictatorship. Contrastingly, Kadhim Nwir (b. 1967, Qadisiyah, Iraq) embraces avant-gardism in his abstraction, his paintings reflecting urban life through distressed color and graffiti-like drawing.

Artistic partnerships such as WAMI are unusual in Iraq. Yassen Wami (b. 1973) and Hashim Taeeh (b. 1948) make furniture installations from new and used cardboard. Their minimalist, unassuming style – which in many ways embodies the Pavilion’s prevailing theme ‘to make do and get by’– is entirely at odds with a popular taste in Iraq for gilded home furnishings and common, incongruous aspirations.