Watch as These Endangered UNESCO Sites Are Brought Back to Life 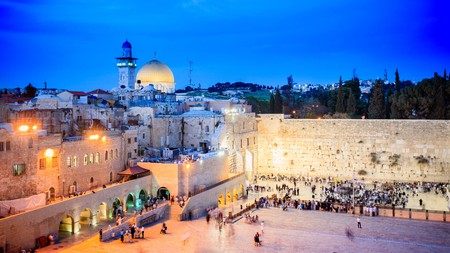 More than 50 of the world’s heritage sites are in danger of disappearing forever due to extensive damage, but one architect has digitally resurrected them in all their former glory.

According to UNESCO, 53 historic properties are in danger of degenerating for good, due to natural disasters and decisions made by humans.

Focusing on the latter, architect Jelena Popovic – in collaboration with experts at Budget Direct Travel Insurance – has turned to technology to cunningly restore significant monuments digitally.

Hatra, added to the World Heritage list in 1985, was long considered the most well-preserved ancient Parthian city from the time of the Parthian Empire (247 BCE to 224 CE). It has withstood Roman invasions in the past, but it hasn’t had the same luck recently. It joined UNESCO’s endangered list after attacks by ISIS in 2015 in which bullets were fired into its walls and its statues attacked with sledgehammers.

The ancient city of Leptis Magna, southwest of Libya’s capital Tripoli, was founded in the 7th century BCE. It was recognised as a stronghold for the Carthaginian Empire and one of the most beautiful cities in the Roman empire – thanks to emperor Septimius Severus, who introduced a theatre built from stone and concrete, public monuments, a harbour and shops. Today, though, this once beautiful city has been ravaged by Libya’s civil war.

Between the first and second centuries, Palmyra, Syria, was an important cultural centre with Graeco-Roman and Persian influences on its art and architecture. As with the city of Hatra, Palmyra has been deliberately targeted by ISIS. “Isis militants reportedly tortured Palmyra’s 82-year-old antiquities chief to reveal where he had hidden the city’s important artefacts for protection,” reports Budget Direct Travel Insurance; he died without revealing the location. Sadly, the Temple of Bel at Palmyra is one of the structures that were successfully destroyed by the rebel group.

In Panama, the Portobelo-San Lorenzo Fortifications, built by the Spanish Empire in the 17th and 18th centuries to protect transcontinental trade, represent classic Spanish colonial military architecture. Over hundreds of years, however, natural wear and tear have seen the structures give way, and in 2020 it was listed on UNESCO’s danger list.

A city of 100 islets built out of basalt and coral boulders between 1200 and 1500 CE, Nan Madol is an archaeological wonder. Unfortunately, though, its geographical location just off the main island – and built on water – has seen it take the brunt of storms, and the stonework has been significantly compromised.

Old City of Jerusalem and its walls, Israel

The Second Temple, otherwise known as Herod’s Temple, and the ancient limestone Western Wall are two important cultural landmarks in the Old City of Jerusalem, which dates back to 3500 BCE. These landmarks, along with the city itself, are facing problems created by natural deterioration as well as urbanisation. For these reasons, in 1981 it was added to the World Heritage Lists of endangered sites, and it’s being closely monitored today.