Beautiful Ramadan Traditions From Around the World 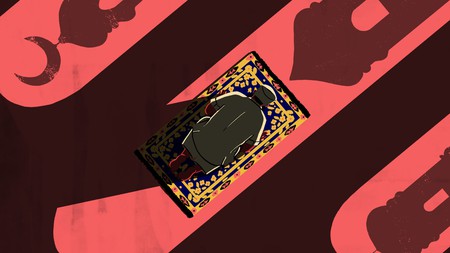 Ramadan is much more than a fasting period: it is a holy month rooted in culture, faith and history. Across the globe, Muslims mark this time with vibrant celebrations that are unique to their region and passed on through generations.

Celebrated by millions of Muslims across the globe, Ramadan is observed every year during the ninth month of the Islamic lunar calendar. Taking place for approximately 30 days – depending on the sighting of the new moon – it marks the month that the Quran was revealed to the Prophet Muhammad in AD 610. One of the five pillars of Islam and mandatory for all able-bodied Muslims, the holy month is marked with shared traditions such as fasting, charity and prayer, as well as practices that vary from culture to culture, from bathing rituals in Indonesia to lantern-lighting in Egypt. Here, Culture Trip contributors discuss how Ramadan is celebrated in countries around the world.

Across Indonesia, Muslims conduct different rituals to ‘cleanse’ themselves on the day before Ramadan. Several localities in Central and East Java keep a purifying tradition called padusan (meaning ‘to bathe’ in Javanese dialect), in which Javanese Muslims plunge themselves in springs, soaking their bodies from head to toe.

Padusan is a testament to the synthesis of religion and culture in Indonesia. Springs hold deep spiritual significance in Javanese culture and are an integral part of purification for the holy month. This practice is believed to have been spread by Wali Songo, a group of revered priests who were the first missionaries to communicate Islamic teachings throughout Java. Years ago, it was common practice for local elders and religious leaders to pick and assign sacred springs for padusan. Nowadays, many just go to nearby lakes and swimming pools, or purify themselves in their own homes.

Cannons fire for iftar in Lebanon

In many countries across the Middle East, cannons are fired daily during the month of Ramadan to signal the end of the day’s fast. This tradition, known as midfa al iftar, is said to have begun in Egypt over 200 years ago, when the country was governed by Ottoman ruler Khosh Qadam. While testing a new cannon at sunset, Qadam accidentally fired it, and the sound that reverberated throughout Cairo prompted many civilians to assume that this was a new way to signal the end of the fast. Many thanked him for his innovation, and his daughter, Haja Fatma, urged him to make this a tradition.

The practice made its way to many countries across the Middle East including Lebanon, where cannons were used by the Ottomans to mark iftar all over the country. The tradition was feared lost in 1983 after an invasion that led to the confiscation of some of the cannons – then considered weapons. But it was revived by the Lebanese Army following the war and continues even today, evoking nostalgia among older generations who can remember the Ramadans of their childhood. 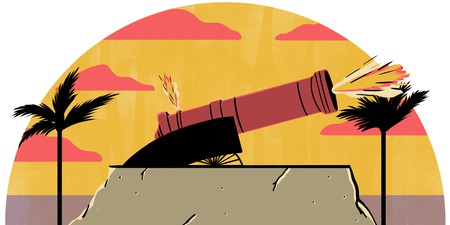 Children sing for sweets in the UAE

Often compared to the Western custom of trick-or-treating, the tradition of haq al laila takes place on the 15th of sha’ban, the month before Ramadan. Shared by many countries across the Gulf, this day sees children roaming their neighbourhoods dressed in bright clothing, collecting sweets and nuts in tote bags known as kharyta – all while singing traditional local songs. The chant Aatona Allah Yutikom, Bait Makkah Yudikum, which translates from Arabic to ‘Give to us and Allah will reward you and help you visit the House of Allah in Mecca’, reverberates through the streets as children excitedly collect their bounty.

In the United Arab Emirates, this celebration is considered integral to Emirati national identity. In today’s modern society, which is often said to be more isolated and individualistic, this celebration offers a return to simpler times and highlights the importance of strong societal bonds and family values.

Women come together on the eve of Eid in Pakistan

As the sighting of the new moon marks the end of Ramadan and the start of Eid-al-Fitr, so begin the Chaand Raat festivities in Pakistan. After their final iftar, droves of women and girls flock to the local bazaars to buy colourful bangles and to paint their hands and feet with intricate henna designs.

In light of this tradition, shopkeepers decorate their stalls and stay open until the early hours of the morning. Local women set up makeshift henna shops close to the jewellery stores, so that they can attract customers out shopping and apply henna on the spot. The atmosphere in the crowded markets on Chaand Raat is one of community spirit, lively and jubilant in anticipation of Eid the following day.

During Ramadan, Morocco’s neighbourhoods are roamed by the nafar – a town crier who, donning the traditional attire of a gandora, slippers and a hat, marks the start of dawn with his melody. Selected by the townspeople for his honesty and empathy, the nafar walks down the street while blowing a horn to wake them up for suhoor.

This tradition, which spread across the Middle East to Morocco, dates back to the seventh century, when a companion of the Prophet Muhammad would roam the streets at dawn singing melodious prayers. When the nafar’s music sweeps through the town, it is met with gratitude and thanks, and he is officially compensated by the community on the last night of Ramadan. 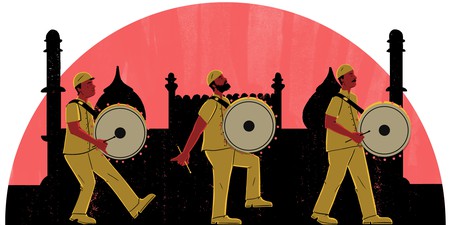 The end of Ramadan is signified by the sighting of the first crescent of the moon. Although this is practised around the world, the uniqueness of this tradition in South Africa is illustrated by the maan kykers (Afrikaans for ‘moon watchers’).

Muslims from across South Africa head to events in Cape Town – South Africa’s so-called Mother City – to search for the new moon. But only the maan kykers, appointed by South Africa’s Muslim Judicial Council, can declare an official sighting. Standing along the shore at the Sea Point Promenade, at Three Anchor Bay or even atop Signal Hill, it’s up to them to inform the Muslim community that Eid-al-Fitr is upon them. The moon must be spotted by the naked eye, and on a crystal clear night in Cape Town, there’s no lovelier sight.

Ever since the days of the Ottoman Empire, those fasting during Ramadan have woken up to the sound of a drum beating early in the morning for suhoor. Despite the passage of time (and notwithstanding the invention of alarm clocks), more than 2,000 drummers still roam the streets of Turkey, uniting the local community during the holy month.

Drummers dress in traditional Ottoman costume, including a fez and vest that are both adorned with traditional motifs. As they go around with their davul (Turkish double-headed drum), the Ramadan drummers rely on the generosity of residents to give them tips (bahşiş) or even invite them in to share their suhoor meal. This bahşiş is usually collected twice in the holy month, with many givers believing they will receive good luck in return for their kindness.

Recently, Turkish officials have introduced a membership card for drummers in order to instil a sense of pride in those who play, and to encourage a younger generation to keep this age-old tradition alive in the fast-changing country.

Every year, the people of Egypt welcome Ramadan with colourful fanous – intricate lanterns that symbolise unity and joy throughout the holy month. Although this tradition is more cultural than it is religious, it has come to be strongly associated with the holy month of Ramadan, taking on a spiritual significance.

The tales of its origin differ, but a prominent account dates the birth of the fanous to one night during the Fatimid dynasty, when Egyptians greeted Caliphate Al-Muʿizz li-Dīn Allah as he arrived in Cairo on the first day of Ramadan. In order to provide an illuminated entrance for the imam, military officials ordered locals to hold candles in the dark streets, sheltering them in wooden frames to prevent them from blowing out. Over time, these wooden structures emerged into patterned lanterns, and are now displayed across the entire country, spreading light during the holy month.

Today, the fanous are often integrated into other local traditions. For example, during the holy month, children walk the streets with their lanterns, singing merrily while asking for gifts and sweets. 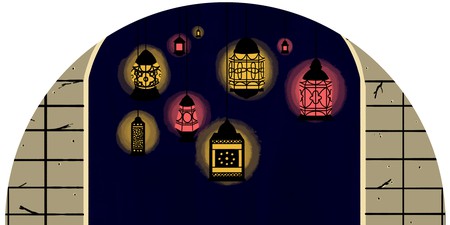 Men gather for games of mheibes in Iraq

In the early hours of the night, after breaking fast, generations of people across Iraq come together for a traditional game of mheibes. Predominantly played by men during Ramadan, this game involves two groups of about 40 to 250 players, who all take turns to conceal a mihbes, or ring. A game of deception, mheibes begins with the team leader holding the ring, his hands draped in a blanket. The other members must sit with their fists tight in their lap, as the leader passes the ring to one of the other players in secret. In a tense exchange, their opponents must determine which of the dozens of men conceal the ring through body language alone.

Though the exact origins of the game are unknown, it has profound cultural and historical value. Decades ago, the Iraqi government would organise community-wide games, hosting hundreds of participants and bringing together locals from across the country. Although this state-sponsored practice was halted during wartime and feared lost, mheibes has made a return in recent years, as individual community members continue to pass forward the tradition.

The seheriwalas (or zohridaars) of Delhi are part of a Muslim tradition that has survived the test of time and represent the city’s old Mughal culture and heritage. During the holy month of Ramadan, the seheriwalas walk the streets of the city in the small hours of the morning, chanting out the name of Allah and the Prophet, to serve as a wake-up call to Muslims for suhoor. This centuries-old practice is still carried out in parts of Old Delhi, particularly in those neighbourhoods with a high Muslim population.

They start their rounds as early as 2.30am and often carry sticks or canes to knock on the doors and walls of houses. For most seheriwalas, the tradition has been passed down across generations in the family. Although their numbers are dwindling, the practice is still prevalent in Old Delhi.

For centuries, the members of the Roma Muslim community, which dates back to the Ottoman Empire, have been announcing the start and end of fasting with traditional songs. Every day for the month of Ramadan, they will march up and down the streets playing a lodra, a home-made, double-ended cylinder drum covered in sheep or goat skin. Muslim families will often invite them inside their homes to play traditional ballads to celebrate the start of iftar.