10 Contemporary Iraqi Writers You Should Know

Despite numerous conflicts, Iraq’s writers display incredible literary virtuosity and versatility, moving between genres and atmospheres to capture the swiftly changing nation. It is naturally almost impossible to streamline such a wealth of talent into a small selection of authors, but here are ten contemporary Iraqi writers carving a place for themselves not only in Arabic speaking countries but, with the help of sensitive translation, across the globe. 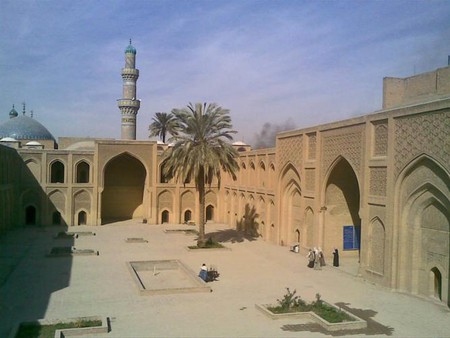 Najem Wali was born in al-Amara and studied German at Baghdad University. Following the completion of his university degree in 1978, Wali was drafted for military service, during which time he was reputedly arrested and tortured as a dissenter. Given the problems arising in the duration of his training, the outbreak of the Iraq/Iran war in the 1980s led to Wali fleeing the country for fear of similar treatment, arriving in Hamburg in November 1980 where he remained in exile. Wali’s Journey To Tell Al-Lahm is arguably his best known work, having becoming something of a cult classic following its initial publication in 2004. The tale is a ‘no holds barred’ description of Iraq under Saddam Hussein’s dictatorship, stylised in the manner of a Kerouac-esque ‘road’ narrative. The two protagonists, Najem and Ma’ali, travel in a stolen Mercedes towards Tell Al-Lahm, entertaining each other with fragmented memories and stories. These snippets are pieced together by the reader to result in a beautifully crafted novel acerbically commenting upon the bitter personal resentment and fractious violence underlying the Saddam regime.

Luay Hamzah Abbas has achieved international acclaim for his intriguing, song-like collections of fiction. Born in Basra and educated to doctorate level at Basra University (2002), Hamzah Abbas currently lectures in Literary Criticism and has had his creative writing published not only throughout Iraq but throughout the English speaking world. His short stories were translated into English by the literary magazine Banipal and his Closing his Eyes (2008) collection was translated into English by Yasmeen Hanoosh, following a grant awarded by the National Endowment of the Arts. His four short story collections and four novels have been recognized with various esteemed accolades, including the Creative Short Story Award from the Iraqi Ministry of Culture (2009) and the Kikah Best Short Story Award from London (2006).

Muhammad Khdhayyir was born and raised in Basra and continues to devote himself to the area and Iraq as a whole. Whilst little is written on Khdhayyir in the English language, some of his fiction is accessible via Banipal, where the keen reader can glean a sense of his ambitious style and delicate prose. Khdhayyir’s Basrayatha is perhaps his best known publication: ostensibly a travel memoir, it manages to resist becoming a coldly accurate and detailed orientation around Iraq. Rather, in its elusive and faded recollections of a city ravaged by war, the reader gains a mystical sense that memory and history serve as the true intrinsic methods of orientation through the paths of life.

Dubbed ‘perhaps the greatest writer of Arabic fiction alive’ by The Guardian, Hassan Blasim did not actually begin his career as an author. Studying film at the Academy of Cinematic Arts, Blasim quickly attracted attention by winning the Academy Festival Award for Best Work for both his ‘Gardenia’ (screenplay) and ‘White Clay’ (screenplay and director). Blasim’s impressively comprehensive essays on cinema can be found in Cinema Booklets (Emirates Cultural Foundation) and a smattering of his fiction at the blog Iraq Story. His most esteemed collections of stories, The Madmen of Freedom Square, longlisted for the Independent Foreign Fiction Prize in 2010 and since translated into five languages, was heavily edited and released into the Arab market in 2012 –immediately banned in many Arab countries. Regardless of his controversial status as a writer, his method of successfully employing unique narrative stylistics cannot be denied. His commitment to spreading his work far and wide has also won him notable acclaim, winning the PEN Writers in Translation award twice.

Betool Khedairi has a fascinating half Iraqi, half Scottish heritage and was born in Baghdad in 1965. An accomplished French speaker with a BA in French Literature from the University of Mustansirya, she currently lives in Amman after a period of splitting time between Jordan, Iraq and the UK. Khedairi’s first novel, A Sky So Close, was translated from Arabic into English, French and Dutch and currently takes pride of place as the subject and centre of literary critique studies in international universities.

Ali Badar is greatly committed to accurately and authentically researching his material. The eloquent and striking Tobacco Keeper explores the false identities and Americanization of Iraq in the wake of the sectarian conflict, highlighting the silent Iraqi victims by demonstrating the global desire to narrativize the Iraqi civilian position rather than relate it directly. Badar is fascinated with narrative agency but not with clichéd routes of blame over the conflict in the Middle East, preferring instead to champion debate and conversation in his writing and discuss hopes and dreams common across both the West and East.

Baghdadi-born Ahmed Saadawi has displayed linguistic talent across a formidable range of creative genres, as well as becoming a highly respected, erudite journalist and BBC correspondent in Baghdad. Best known, perhaps, for his screenwriting, Saadawi is also a prolific poet, short-story writer and author of three novels: The Beautiful Country (2004), Indeed he Dreams or Plays or Dies (2008) and Frankenstein in Baghdad (2013). In 2010, he was selected for the Beirut39 as one of the 39 best Arabic authors under 40 and continues to be rewarded for his innovative vision. His ability to eloquently paraphrase the struggles of a growing nation was confirmed once again in 2014 when Saadawi was announced as the winner of the seventh International Prize for Arabic Fiction.

Iraqi-born journalist Inaam Kachachi has made her life a Parisian-Arabic fusion, moving away from Baghdad and to Paris in 1979 to complete a PhD. Still based in Paris, Kachachi is a freelance writer and local correspondent for many Arabic-language newspapers and writes both fiction and non-fiction prolifically, honing a particularly realistic and gritty writing style. Her second novel, The American Granddaughter, was nominated for the Arabic Booker Prize and her latest endeavor, Tashari, shortlisted for the International Prize for Arabic Fiction (2014).

Iqbal al–Qazwini, Iraqi exile in Germany and human rights activist, is a successful freelance journalist for Arab and German media and a member of the International PEN World Association of Writers. As a member of the Iraqi Women’s League, al-Qazwini was sent to East Berlin as a representative and prohibited from returning following Saddam Hussein’s ascension to presidency in 1979. Since this point, she has lived and worked in Germany, producing writing that excels in its account and detail of gender issues, child labour and human rights. Her most famous novel, Mamarrat al-Sukun about the exile of a young Iraqi woman – translated into English under the title Zubaida’s Widow – has a pertinent ring of truth about it that cements the beauty and poignancy of the narrative.

As the youngest and only female nominee for the 2012 Arabic Booker Prize, Hawra al-Nadawi has already established herself as one-to-watch with her debut novel Under the Copenhagen Sky. This immediate success and ability to stand apart is perhaps unsurprising given al-Nadawi’s somewhat unorthodox upbringing – as the child of Arab and Kurdish political prisoners under the regime of Saddam Hussein, her earliest days were spent in Iraqi jails alongside her mother. The family fled to Denmark after the 1991 uprising against the regime and al-Nadawi is thus trilingual, speaking Danish, Arabic and Kurdish as well as being extremely accomplished in Latin, English, German and French.