Walls Of Kindness: The Charitable Movement In Iran 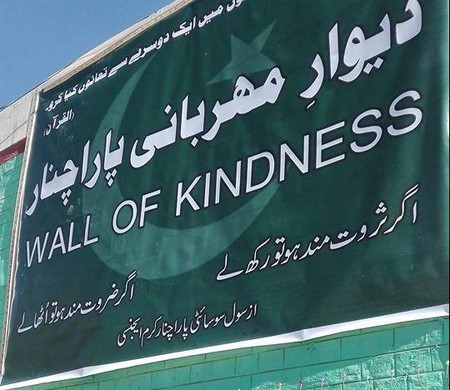 Since the first ‘wall of kindness’ sprang up in Iran last December, the concept has spread like wildfire across social media. Here, we a look at how a simple act by one anonymous philanthropist has become a powerful symbol for co-operative citizenship and camaraderie across the Middle East and beyond.

A wall, deceptively concrete and clear-cut on the surface, is an implicitly subjective thing. A guarantee of safety for some, for others it may be acutely menacing; it all depends on which side you fall.

For homeless people, all too often a wall is the symbol of exclusion; the thing that stands between them and shelter, of a life, closing them out of society at large. Of course, walls are not always physical — they are ideological boundaries constructed to define the limits of our existence, dividing concepts that separate the self from the other. They allow us to walk past those in need, not stopping to dwell on their well being while keeping our consciences clear. Walls keep us distinct, disentangled from the crowd. Walls keep us selfish.

In Iran, the wall has taken on a new meaning. Iran is a country where, as in so many others, homelessness is on the rise — 15,000 of its citizens and counting have nowhere to call home, with even this perhaps being a conservative estimate. Troubled by the trend, one anonymous resident of Mashhad, Iran’s second most populous city, took to the streets on a philanthropic mission. Painting a run-of-the-mill wall in bright, inviting colors and installing some pegs and hangers, the residents established the country’s first ‘wall of kindness.’ Simple words daubed alongside it make the concept clear: ‘If you don’t need it, leave it. If you need it, take it.’

Mashhad’s citizens enthusiastically took up the call, donating coats and other warm clothes to help the city’s homeless population through the bitterly cold winter months. As one Iranian put it, ‘walls remind us of distance but in some streets in Shiraz they brought people closer to each other.’ The initiative was an instant hit on social media, with copies springing up first throughout Iran, then spreading further afield to Pakistan and China — although one Chinese city’s authorities closed their wall after residents complained it had become a dumping ground and an eyesore.

Charitable giving, as well as a compulsory allocation of earnings to the needy, is an important value in the Islamic faith, so it’s perhaps unsurprising that the walls of kindness have proven so popular. Iran recently saw a similar movement that encouraged people to share food with those in need, with shops putting out baskets of food for the homeless; in Tehran, refrigerators were installed across the city’s streets, with signs inviting citizens to donate food for the poor.

However, the spread of grassroots charity has also sparked a debate about the failure of the Iranian government to support its poor, so many of whom have been hit hard by the country’s ongoing recession. Nevertheless, the simple act of one anonymous philanthropist, the re-appropriation of ‘the wall’ as a tool for inclusion rather than division, has become a powerful symbol for citizenship and solidarity across the Middle East and beyond.

The Deewar e Mehrbani (Wall of kindness) concept was first initiated across the border in Iran – it has now been adopted by the citizens of Pakistan also. Random walls in multiple neighborhoods across the many cities and towns of the country are now being established for the sole purpose of helping out the needy and more destitute citizens of our society. People can come to these walls anonymously and drop by whatever they think could be of some use to someone else from clothes and shoes to packed food items. I hope to see more people adopt this concept world over – it's such a simple yet beautiful concept. This particular wall is located on 26th Street in Clifton just before the Bahria Town flyover on the left hand side. From what I know of there are walls near the St Patrick's Church , University Road and one coming up soon behind the Karachi Gymkhana near Gullivers Travels.