The Makhmalbaf Family | A Legacy of Filmmaking

The Makhmalbaf family represents a unique phenomenon in the history of Iranian cinema. Film connoisseurs and the world’s top film festivals love them: between the two parents and their three children, the Makhmalbafs have made some of the best films to have come out of Iran over the last decades. We explore their inspiringstory, and take a look at the dynasty’s most acclaimed films and documentaries. 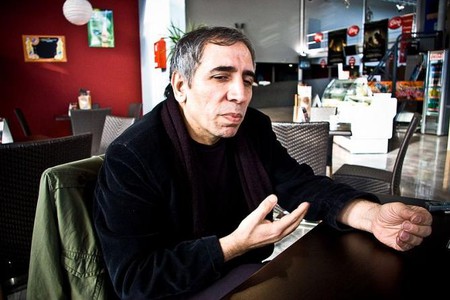 It is often the case that when a child’s parents are accomplished artists, she ismore likely to follow in their steps and build a career in the industry her folks are so well established in. But with the Makhmalbafs, this occurrence has reached unprecedented standards. Considering the curricula vitae of dad Mohsen, mom Marziyeh and their children Samira, Maysam and Hana, one is led to wonder whether talent in filmmaking might be a matter of genetic heredity. For the Makhmalbafs, cinema is a family business. Usually, each member is involved in the others’ projects, sometimes as a director, sometimes as a scriptwriter, sometimes as a producer – the familial bond holds both in personal and professional life. But the success of this Iranian dynasty can only be fully understood in the context of Mohsen Makhmalbaf, their forefather and legend of Iran’s cultural scene.

The cinematography of Mohsen Makhmalbaf is deeply related to the history andculture of Iran. Importantly, Makhmalbaf, born in 1957, has been and continues to be politically active against Iran’s authoritarian governments. He started fighting against the Shah’s dictatorship in his teenage years, and spent about five years in prison, from the age of 17 to 22, for attacking a policeman (during his incarceration, he was tortured to the point of losing the use of his legs, albeit temporarily). In prison, he picked up a passion for writing, and has been a prolific writer ever since, with 27 books published so far; once free, however, he started dabbling in film-making, and it was in cinema that he eventually found his highest form of expression, to international acclaim. Today, Makhmalbaf is a much-revered director, whose work has been showered with awards at the world’s most renowned film festivals: Venice, Berlin, Cannes, Toronto, Beirut, and more. His 2001 film Kandahar included in a list of the 100 best films ever made by Time magazine. The film was secretly shot in Afghanistan during the Taliban regime, only a few months before the Twin Towers terrorist attack and the subsequent war in the country.

Makhmalbaf’s oeuvre has been largely characterised by cinema critics – and by Makhmalbaf himself – as divided into four periods. The first one, spanning from 1982 to 1985, numbers four propagandist films extolling the Islamic revolution that erupted in the country in 1979, which depict the revolutionaries as unquestionably standing on the right side of history. Boycott (1985) is loosely based on Makhmalbaf’s personal experience: the protagonist Valeh, an anti-Shah activist, gets incarcerated for assaulting a policeman. The second period includes three films made between 1987 and 1989; in these years, Makhmalbaf’s narration shifts from a political to a more social level, reflecting in particular on social inequalities. In The Cyclist (1989), an Afghan refugee called Nasim rides a motorcycle unceasingly for several days as a sort of a sideshow, to quickly earn some money and pay the cures his ill wife needs. The films in Makhmalbaf’s first two periods have in common a general concern with society at large, and the use of the cinematic art as an act of commentary. In these early phases, Makhmalbaf’s work shows a clear-cut separation of human beings into the good and the bad: in the first period, the good ones were the revolutionaries; in the second period, the poor.

In the third phase of his cinematography, this distinction is no more: Makhmalbafeventually acknowledges that human nature is more nuanced than black or white. Indeed, the films made from 1991 to 1996 are less socio-political and more introspective: the camera becomes a tool to explore the individual’s heart and inner world. Several are also metacinematic, in the sense that they pose a reflection on cinema itself, on its history and its ability to tell the truth as well as to construct it. Once Upon a Time, Cinema (1992), for example, features many clips from the early years of Iranian cinema – throughout the film, Makhmalbaf utilises many classic acts and techniques typical of the cinema’s silent era. The fourth and last period, which continues to this day, coincides with Makhmalbaf’s maturity, both as a director and as a man. The entire evolution of his cinema has been a manifestation of his personal development, and the films he’s been making in this latest period of his life and career have shown a unique vision, a taste for poetic imagery and the medium’s cinematic possibilities, while still dealing with the social and political issues of religion, violence and human rights in Iran and Afghanistan.

Mohsen Makhmalbaf’s most recent international success is the 2012 film The Gardener. In this pseudo-documentary, Mohsen Makhmalbaf is seen debating with his son Maysam about the connection between violence and religion, as they prepare a film concerning the Baha’i faith, a Persian religion prohibited in Iran. The film offers many of the lyrical images that Makhmalbaf has learned to craft in his late career, and in particular those shot in the beautiful Baha’i gardens in the Israeli cities of Haifa and Akko. Of the Makhmalbafs, Maysam, Mohsen’s second child, born in 1980, is the one to have worked less as a director. In fact, he only directed How Samira Made The Blackboards, a documentary film about the making of one of his sister Samira’s most successful films. For the most part, Maysam works as an editor, producer and still photographer on the family’s films, contributing a less creative but equally invaluable role.

Continuing in Mohsen’s tradition of a socially concerned cinema, the Makhmalbaf women have all been particularly committed to depicting on the screen the discriminating conditions that women have to endure in Iran and neighbouring Afghanistan. Marziyeh Meshkini, born in 1969, was the sister of Mohsen’s first wife, Fatimeh; they got married after Fatimeh died in a domestic accident in 1992. Marziyeh made her debut as a director in 2000, with the film The Day I Became a Woman. The film, written and produced by Mohsen, features three episodes, each following the life of an Iranian woman at different stages of her life. In the first episode, the protagonist is Hava, a young girl who, on her ninth birthday, is told to stop playing with her best friend (a boy) and wear a chador as she has reached womanhood; in the second episode, the story is that of Ahoo, whose husband decides to divorce her because she will not renounce her passion for bicycle races; lastly, the third episode features Hoora, an elderly woman who, free from the bond of marriage, can finally buy all she has ever wanted. The Day I Became a Woman met with international approval, and won awards at the Venice Film Festival, the Toronto Film Festival and the Chicago International Film Festival, among others.

Samira Mackhmalbaf was born in 1980, and is Mohsen’s first child. She startedstudying cinema at the age of 14, and directed her first feature film, The Apple, when she was only 17. A stunning debut, The Apple is based on the true story of two young girls kept confined to their home by their parents since their very birth. Following the reports of some neighbours, the 12-year-old girls are finally liberated, and the film follows them as they discover and explore the outside world they had never known before. The Apple was chosen for the official selection of the 1998 edition of Cannes Film Festival, making Samira the youngest director to participate in the French festival. Samira was actually invited again to Cannes in 2000 with her second feature film, The Blackboards, the story of a group of itinerant teachers looking for kids to teach across Kurdish Iran, carrying their blackboards on their backs; and once again in 2003 with her third feature film, At Five in the Afternoon, the first film ever to be shot in Kabul after the end of the Taliban government, which centres on a young woman looking to gain an education in post-Taliban Afghanistan. In both those editions of Cannes Film Festival, Samira was granted the Special Jury Award.

With so much cinema in her house, could little Hana, the youngest of Mohsen’s children, escape a career in film-making? Unlikely. But it would have been harder to predict that Hana, born in 1988, would come to the attention of the international cinema scene already at the age of 9, when she presented her first short film, The Day My Aunt Was Ill, at the 1997 Locarno Film Festival. Her first feature film, Buddah Collapsed Out of Shame, came in 2007 and received many prestigious prizes across the globe. With a similar theme to her sister’s At Five in the Afternoon, Hana’s film is about a 5-year-old girl who deeply desires to attend school in an Afghanistan liberated by the Taliban regime.

Talent is certainly not a matter of genetic heredity. But it can be infectious. Today,the three young Makhmalbafs are 34, 33 and 26 years old respectively – they have entire careers to look forward to, and quite an advantage under their belt: they can already make a good film, thanks to Mohsen and Marziyeh. And their talent is a powerful tool in the storytelling of Iran and Afghanistan’s rich cultural, political and social heritage.