The Mad Men of Tala Madani 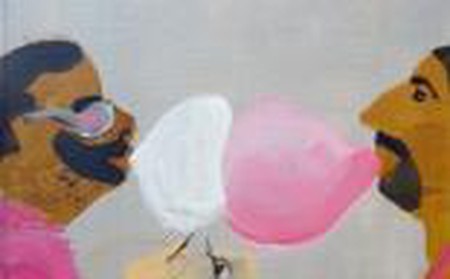 Don’t be distracted by the tangy colour palette used by Iranian artist Tala Madani. Her canvases, filled with men and lush gelato, subtlety allude to a world of violence and authoritarianism. Rajesh Punj explains how this young talent has successfully challenged our understand of the Middle East and its power structures. 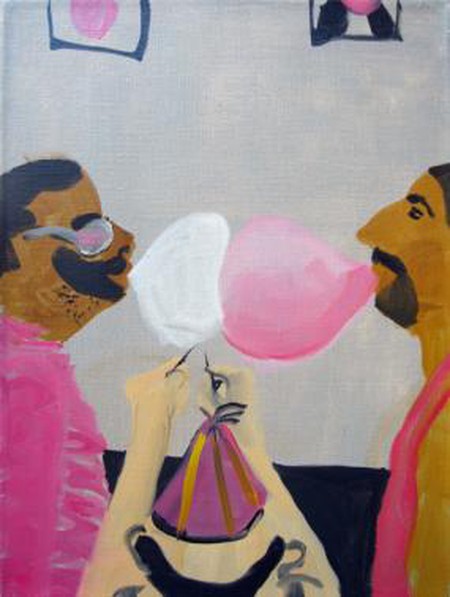 There is a wonderful charm and intoxicating aura about Tala Madani’s canvases as they read like incidents from a sophisticated comic strip. The paint rests on the surface like indulgent scoops of ice-cream, smeared onto the counter of a well-established delicatessen. Though for all their visual warmth, Madani’s works allude to a violence and authoritarianism that is as much domestic as it is universal.
The painter’s characters are childlike, playful even, in their compositional expressions, as they appear not only to wrestle with one another but with their fate as figures in paint. Given to explaining her work, Madani begins by declaring herself ‘a painter and not an artist’. For her, she says, ‘the artist has an ego over the material while a painter is much more subservient to their materials.’ She goes on to further explain her paintings ‘as me acting upon the canvas’. She defines that ‘the four corners of a canvas create an abstract space where I can commit my actions.’
For Madani, her paintings are eclipsed only by her animations, which we touch upon when discussing the direction of her work. Incisive in her short films, Madani declares there is a ‘greater effectiveness’ in what you can do – ‘Animation is more sharable, portable even.’ Immediately there is a sense that painting and animation have a hierarchical position as the tools of her trade and Madani admitted ‘to painting being more difficult, while my animations have reached a greater number of people’. She adds that ‘it is so much to do with our education systems and developments of visual cultures globally, that animations and moving images are more accessible.’

Madani was born in Tehran in 1981 and now lives between Amsterdam and New York. Reading political science and visual art at Oregon State, she was awarded the University President’s Award for Excellence in Art. Graduating from Yale University with a Master’s in Painting in 2006, she received the Visual Arts Fellowship from The Fine Arts Work Centre, Provincetown in 2006 and the Kees Verwey Fellowship in 2007. 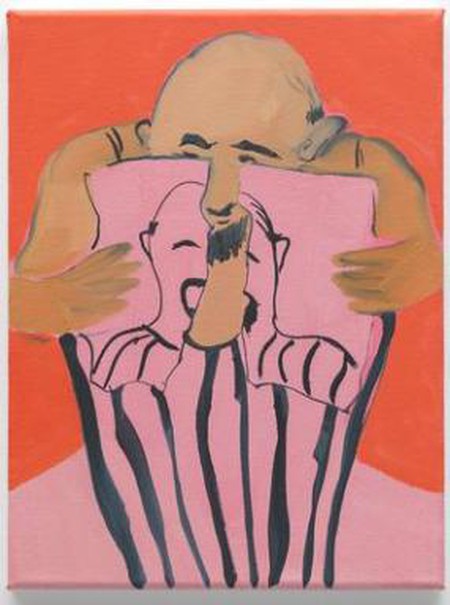 She has shown in a number of group exhibitions, including Saatchi’s Unveiled: New Art from the Middle East, and participated in the Venice Biennale’s Dutch Pavilion in 2012. As a resident of both Europe and the USA, Madani is influenced by pretty much everything there is and specifically references cartoonist Robert Crumb, the ‘Chicago Imagists’ who hailed from the 1960s and 70s and the work of American painter Alice Neel. Theatre, film, illustration and Japanese prints are the buzz words for Madani as it becomes less and less possible to define her practice to a particular moment or movement. Recalling her early works, the unnerving grouping of men in canvases like In Line (2006) suggests something of the shackling of prisoners at Guantánamo Bay. Holy Light (2006) is another impulsive work that appears to have been violated by slick threads of paint that have discoloured the majority of the canvas. This might represent light as it pours unceremoniously over another group of beleaguered men whose hands are clasped behind their backs. Is this depicted moment a precursor to divine ecstasy or the pre-emptive massacre of men? Might these be the secret police of the Libyan dictate, Egypt’s rallied generals acting out their desires behind closed doors or are they Syria’s secret intelligentsia, indulging in private pleasure? Are we privy to such detail or are our tentative urges for the identity of these half-naked men indulging themselves futile?
This uncertainty is something of the strength of Madani’s paintings, as they manage with incredible gusto to challenge our understanding of the
Middle East and of power-structures in general. The artist wishes, between Europe and the USA, to critique the stature of all men by stripping them of their masculine apparatus and replacing it with the foolish tools of idiots. If violence appears at the core of all of Madani’s works, then it is imperative to ask why. Provocatively for her, violence as it exists in her work is not necessarily the abhorrent act – It is the regularity of it among men, the reasonableness and the celebratory air about it that appeals to her. Quite possibly, the manner in which violence has effectively infiltrated our imagination, as it becomes a domestic action as well as an international crime. Madani suggests that within her paintings, these figures are allowed the freedom to celebrate violence as it exists at that moment. Madani [alludes to] a moment that constitutes many moments of violence the world over.

A History of Violence

When referencing her early works, in Line and Holy Light from 2006, Madani defines her interest in ‘the masses’, of how ‘these linear motifs of men, moved between abstraction, detail and then effectively returned to abstraction’. And apart from the fact that they appear cast under the same spell, Madani defines her early decision to paint men – ‘it wasn’t a conscious choice of men over women, it was a process of elimination because I didn’t want to cartoonise the female figure with exaggerated breasts etc.’ 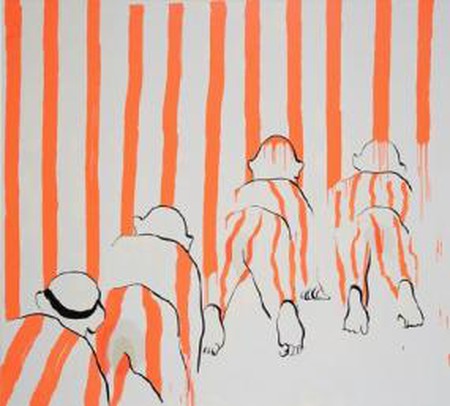 More troubling are works like Tower Reflection 2006, a four-metre long canvas of repeated gestural strokes that are depicted as figures on all fours, as Madani suggests the labour of men is subservient to a clandestine system of civil obedience. The hypnotic charm of this work is in its use of washed-out red arches, crudely repeated over the canvas against Madani’s uncanny use of perspective, as each of her figures are disseminated by crass grid patterns. With a slight of hand, these abstractions fast become configurations of forms as the arches, decorated as figures, rest on all fours, appearing poised by their duty to one another; each tier of men closer to death or freedom. The rationale for such a configuration of men is what is so puzzling about this work, because it can only suggest one of two things: detainees’ subjection to routine acts of violence or the endless history of violence as it is subjected upon a community of men; The ‘Groundhog Day effect’, as Madani refers to it. In such canvases, she appears to have rationalised the irrational, given form to the circumstances of man’s inhumanity to man.
Where the crudeness of these initial scenes hold your attention in 2006, in works from 2007 and more especially 2008, Madani’s paintings appear more sophisticated for their palette and at the same time, she appears to apply greater detail to her forms. This is a clear distinction between Madani’s earlier works, ‘which are larger canvases with a greater mass of people and the smaller works with more detail and fewer figures’. Those figures take on unmistakable characteristics and interiors appear more resolved without becoming finished. Madani still manages to allude effectively to the animation of a moment that constitutes many moments of violence the world over, by being more considered in her forms yet retaining the looseness of her brushstrokes.
Nosefall 2007 is a work that reflects Madani’s preoccupation with these ineffective armies of men. This placid painting depicts a platoon of men dressed in pink leotards preparing for parachute dives. With seemingly little effort, Madani brilliantly subverts their macho apparatus as phallic symbols that they have attached to their less masculine selves. In this utterly perverse work of beauty we are privy to the closed circles of men demonstrating their prowess for perfunctory ends. Resembling animated guerrillas admiring one another, these replicated figures in oil appear plagued by nosebleeds – an affliction that renders this troop more titillating than tyrannical. This work takes Madani back to a recent working visit to Iran and a moment when she revealed two works with phallic undertones (to a lecture theatre of attending undergraduates at Tehran University) and surprisingly for Madani, instead of brushing the moment aside, ‘the students laughed quite violently, especially the more conservative ones,’ she recalls. 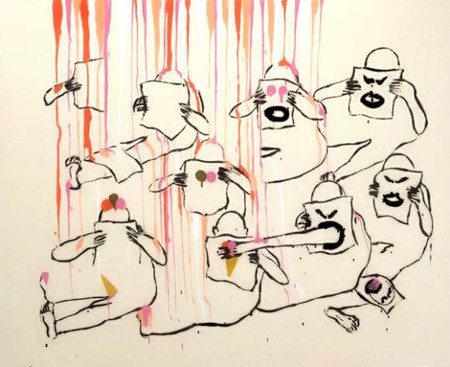 In Love and War

The mix-up of cake and conflict is the abrasive energy that illuminates Madani’s work time and again. Elastic Pink (2008) is a delicious work of contorted chocolate and vanilla-coloured figures and in Pink Cake (2008), two semi-naked men front up to one another in a cacophony of cake and candlesticks, and appear to be indulging in an act of machismo and sexual perversity. The confrontation is charged by a mix of mutual lust and masochistic violence. In Clown Victim (2008), Madani employs the recurring motif of the clown face as a disguise for the actions of violent men. Clown Victim is a disturbing work, painted with measured gusto, depicting two men, side by side, a scene that could equally be read as sexually charged or an act of violence.
In Spraying Stripes (2008), Madani’s figures appear to be classified in a similar vein as the incumbent recipients of craven acts of capital punishment; whether that be at Guantánamo Bay or an insurgent’s compound in the Afghan mountains. The spray-can could well be replaced by a hand gun and the paint by blood, as they appear ready for execution in this laborious setting of dictate and domestics, all fixed to a pink rug. BHaus (2009) is a distinctive work that is a graphic reflection of Madani’s preoccupation with power structures. These multi-coloured men appear quietly committed to their symbolic circus trick.
When pressed, Madani appears to have moments of unsolicited frustration which call her to demand a degree of activism on our part, so that reality can be questioned. Touching upon her relationship to Iran and what is possible as an Iranian artist now, Madani has a healthy scepticism for all cultural constructs, whether they stem from the Middle East or the Americas. Has she burdened herself when she describes ‘the impossibility of it all?’. Reassuring such fatalism is temporarily replaced by her enthusiasm for her new lexicography of British-built ‘dazzle ships’ that were used during the Second World War to confuse the visual rangefinders of the enemy on the water. A telling new metaphor of what is to come.