The Best Iranian Dishes to Try That Aren’t Kebab 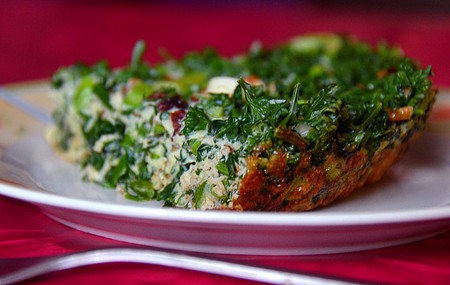 Iran is well known for its fantastic cuisine and its friendly people. Travellers will often be invited into an Iranian household for dinner – so just say yes! Iran is most famous for its kebab and there are many varieties, from chelow to kubideh. But while you’re travelling you will most likely crave something else, too. Here is a selection of alternative Persian staple dishes that you can sample around the country.

A keen favourite, fesenjoon is at the top of our Iranian meal list. It is a chicken, walnut and pomegranate khoresh, or stew, usually served with rice. If you are lucky enough to see an Iranian cook the stew from scratch, watch how boiling the walnuts produces a wonderfully rich and deep-coloured oil at the top of the pan. Pomegranates are a staple item in Persian kitchens and this dish certainly doesn’t disappoint with its generous use of pomegranate sauce. The gentle acidity blends with the richness of the dish perfectly.

This is another of the most popular stews in the country. It’s easy to cook, too, so you can make it when you come back from your travels. The tomato base of the dish provides something a little different to other Iranian stews. It is full of dried yellow split peas, meat and saffron, with its most distinctive touch being the sharpness of the limes that are added. You will sometimes see thinly sliced potato, resembling chips, served on top. 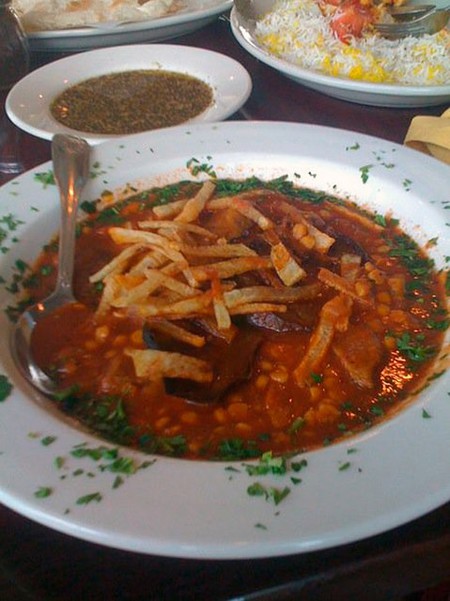 This is a staple dish in Iran, where households will have their own tweaks and versions of the recipe. Different regions use slightly different recipes, with some areas using red kidney beans, black-eyed peas or brown beans, while some people even include spinach. Should fresh or dried herbs be used? It’s different for everyone, but it’s the methi, or fenugreek, that makes this stew. Other herbs, sabzi, add to the flavour, such as parsley and coriander, which compliment the meat. This dish is so well loved that there is even an International Ghormeh Sabzi Day, which takes place on the last Saturday of each November.

Sometimes even Iranians get bored of rice! Turn to this soup for something different. It’s so hearty, it’s like a meal in its own right, being full of beans, noodles, meatballs, kashk (whey) and pomegranate juice. There are so many layers to this dish, and it is filled with various herbs such as coriander, parsley and mint, making it an aromatic staple go-to in Iran. 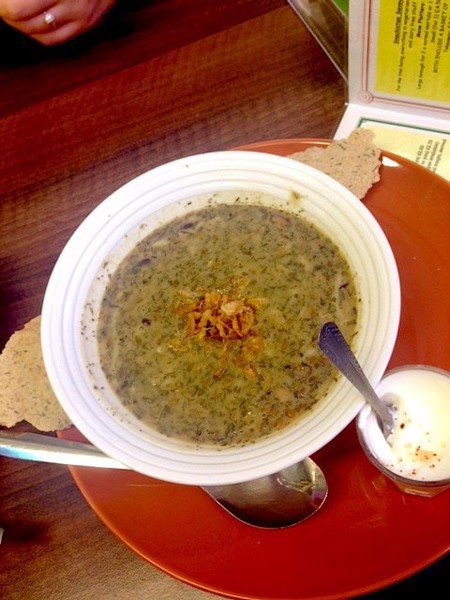 This meal is like an Italian frittata. Bright green, it is once again packed with a variety of herbs, from parsley to chives and from dill to coriander. This is a great packed-lunch option and so you will see many Iranians dish it up as part of their picnics. Kuku sabzi is traditionally fried, but it can be baked too, which is easier to prepare. Some variations include potato, aubergine and meat.

Commonly served for Persian New Year celebrations, this is another one of the simplest Iranian dishes to make. Kotlet are essentially like small burgers and are commonly stuffed into bread with salty gherkins and tomato slices. The most common meat is beef, but some variations include turkey, lamb or chicken.

This is a well-loved salad in the country. Its influence is believed to be traced to salade ruse, which is made with peas, carrots, potatoes and mayonnaise. The Iranian version removes the carrot and instead uses chicken and boiled eggs and sometimes cucumber. This is also used as a sandwich filling and is a great on-the-go Iranian dish.