The Best Films By Jafar Panahi: A Cinema Of Rebellion

Jafar Panahi, alongside his mentor Abbas Kiarostami, is considered as one of the most remarkable figures of the second wave of Iranian new wave cinema. In 2015, he was awarded the Golden Bear at the Berlin International Film Festival, the prize awarded to the best film at the festival. Panahi’s films realistically depict humanity and its struggles in Iranian society. He audaciously comments on political and social issues to challenge the authorities. Although he is one of the most suppressed filmmakers in Iran, he artistically changes limitations into art. Here are Panahi’s most controversial films you shouldn’t miss.

Co-written with Abbas Kiarostami, The White Balloon is Panahi’s debut feature film. It is a beautifully directed drama about a seven-year-old girl who loses her money on her way to buy a goldfish before Persian New Year. She asks for help, and through the eyes of this little girl, viewers discover different types of people in Iranian society from shopkeepers to an Afghan boy who sells balloons. Inspired by Italian neorealism, Panahi pays particular attention to childhood and creates stories out of small interactions. His artistic sensibilities redefine humanitarian issues and provide new insights into the Iranian society.

In The Circle, Panahi boldly sheds light on problems of women in modern Iran. He keeps the neorealism style to show Iranian women’s daily struggles as realistic as possible. The cast is made up of mostly non-actors, and there are several female protagonists rather than just one. The Circle portrays a circle of women whose stories are somehow interrelated like a circle in the male-dominated society of modern Iran. As Panahi remarks, ‘everyone in the world lives within a circle, either due to economic, political, cultural or family problems or traditions.’ The radius of the circle can be smaller or larger, and the film encourages its audience to expand the size of the radius. Due to its controversial topic, the film was banned inside Iran, but it was successful internationally.

Offside is a controversial football film that centers around women’s issues in Iran. Inspired by his daughter’s experience of being refused entry into a football stadium in Iran, the film shows how a group of girls disguise themselves as boys to be able to enter a football stadium. Panahi’s docu-fiction style enables the audience to feel how difficult it is to be a woman where you are deprived from your rights. The film reinforces the idea that women should have equal rights in a society to enjoy public events. Due to audacious criticism of the law, the film was banned in Iran but won several awards in international festivals such as Berlin International Film Festival.

After his house arrest and the ban on his filmmaking, Panahi didn’t give up and showed his rebellious nature again by making a documentary about freedom within the confines of his own house. This Is Not a Film documents a day in Panahi’s life, and the camera stays on, no matter who comes and goes, emphasizing the power of cinema. His house becomes the microcosm of the society in which he is imprisoned. Panahi as an actor in his own film wittily expresses his frustrations to the camera to shed light on the process of filmmaking, which requires courage and perseverance. The film repeatedly attempts to ask this question: why should it be a crime to make a movie?

With Taxi Tehran, Panahi continues guerrilla filmmaking to protest against his confinement. Taxi Tehran is a docu-fiction in which Panahi himself plays the role of a taxi driver and wittily interacts with his passengers. Through the lens of a hidden camera, the characters, who are mostly real people instead of actors, talk about life, cinema, freedom of speech and their concerns about social and political problems in Iran. Although the film was made illegally, it was well received by critics and won the Golden Bear at Berlin International Film Festival. 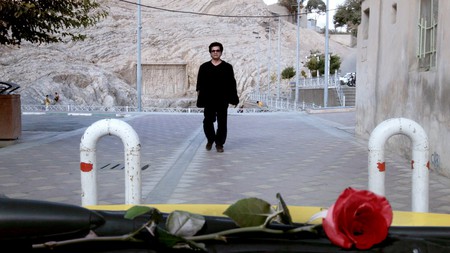