Street Art In Iran: Social Commentary On The Streets Of Tehran

They spray Tehran’s city walls with vibrant colors, oppose social injustice with visual provocation and defy the law with their artistic statements. In Iran, urban art is on the rise thanks to artists whose public work questions the country’s social and political status quo. We profile the street artists who are making their visual voice heard. 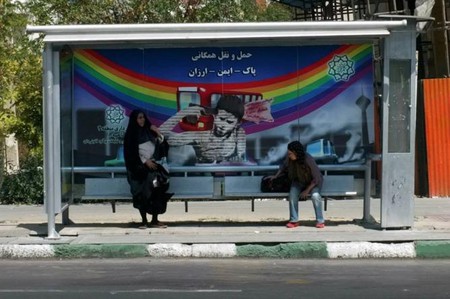 Wall painting boasts a long and complex history in Iran. After the Iranian Revolution in 1979, which abolished the rule of the Shah, the country was established anew as an Islamic Republic. Gigantic images of religious martyrs and heroes of the revolution began to adorn Tehran’s previously bare walls. Dominated by ideological narratives, public spaces became another place for political indoctrination and, gradually, a battlefield between state-sanctioned mural painters and independent street artists. Today, this gargantuan propaganda often labelled as urban beautification is faced with the challenge of much smaller, politically nuanced stencils, stickers and graffiti.

Tehran’s urban artists work constantly, stubbornly refusing to be silenced by the powers that be. Their visions illustrate the dichotomies of daily life in Iran: themes of war and peace, poverty and inequality, cultural identity and social injustice. While there is no organised movement of any sort, and all work is wiped off the walls within hours of its creation, these young artists demonstrate a stunning dedication to their own mission – whatever it may be.

© A1one, courtesy of the artist

On his blog, A1one writes: ‘maybe I am a vandal or anarchist, but I am glad to introduce myself as one. I am not about politics (…)’. One of the longest-standing street artists in Tehran, A1one started painting the streets over ten years ago.

Though he produces astonishing stencil and sticker-based street portraits, freehand calligraphy has become his signature style. The walls he paints come alive with layers upon layers of Persian script, which overlap, silhouette and accentuate each other in a vivid allusion to the Persian technique of siyah mashq – an artistic process in classical calligraphy, whereby single symbols are constantly re-written until perfection. As a result, A1one’s finished images appear embossed, rich with a sense of history and heritage. A1one has recently broadened his portfolio to 3D graffiti models, where the sweeping curves of his calligraphy take on a palpable form and so formally embody both the wall and the symbol.

Many of his ‘calligraffiti’ works spell out the word ‘truth’ in Persian writing. By repeating ‘truth’ on the world’s walls, crafting its seemingly symmetrical yet complex curves and edges, spraying it on in myriad colors, A1one insists on exactly that – the truth.

Having left Iran for artistic reasons, he now resides in Germany. 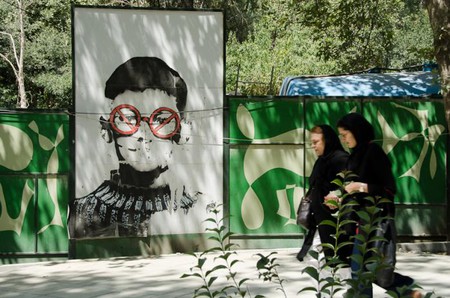 Arguably the most widely appreciated street artists to come out of Iran, brothers Icy and Sot are on a self-confessed ‘creative crusade to dismantle pre-conceived perceptions’ of Iran and its traditions. In doing so, they are also truth-seekers like A1one. They attest that ‘street art is a kind of political art, because it’s speaking directly to the people.’ And it is both to and about the people that the brothers talk through their art.

The figuration in Icy and Sot’s stencils extends beyond language. Women and children feature prominently in their work as vulnerable figures most prone to abuse and tragedy. Children are illustrated praying, hiding, walking alone, laboring – the imagery refers powerfully to the destruction of innocence, to injustice and disillusionment. Then there are the touching portraits of the elderly that lend a shape to the confrontation of tradition and modernity, the old and the new in Iran’s culture. And likewise, street art is a new form confronted with traditional preconceptions and prejudice. When they still lived in Tehran, Icy and Sot fought this, rendering the figures as part of Iranian society, natural elements of the lively traffic of people, cars and goods.

Icy and Sot have been displayed in galleries in New York, Berlin, Amsterdam and Milan, but the first time they ever attended one of their exhibitions was in 2012, when they were granted artistic visas to live in the USA. They have both been granted asylum since then.

Combining social commentary with a dose of humor and distance, MAD belongs to the ‘later’ generation of street artists. He creates almost uniquely stencil-based works, and sends his stencils to friends abroad (including Icy and Sot), who then spray them onto New York or Paris walls. MAD admits that although street artists have a tough life in Iran – they are regularly accused of Satanism and receive no support from artistic institutions – he still enjoys the purity of the whole situation, the fact that it has just been born. He also points out that there are many Iranians who do enjoy urban art, and who are eager to talk to the artist as he paints on yet another wall. 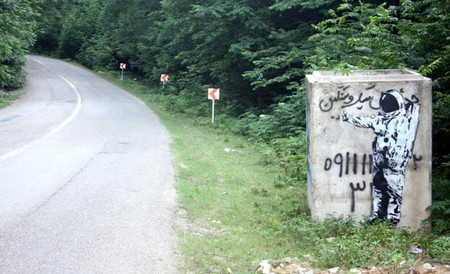 © MAD, courtesy of the artist

The peace symbol features prominently in various arrangements: taken away by two soldiers with their backs turned towards us, or serving as a support for three children who hold on to it with shy, hopeful smiles on their faces. The images speak for themselves in their integrity and spirit. 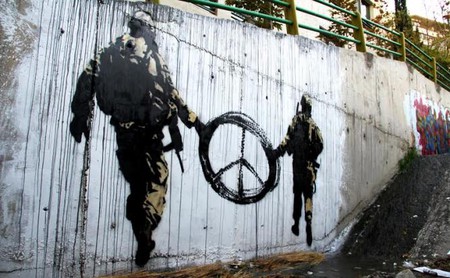 © MAD, courtesy of the artist

Nafir comes across as humble and modest. When asked to describe himself, he responds that there is nothing to be said; ‘I am just a scream on [a] wall’, he states. And there are more dichotomies to his identity: his butterfly logo is at once fleeting and charged with cultural power, its wings filled in with a heavy, ornate Persian pattern. 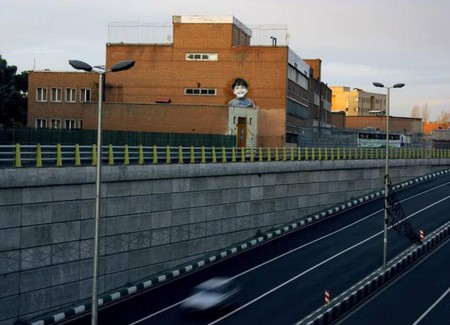 © Nafir, courtesy of the artist

Nafir’s stencils, too, are distinguished by their seeming disharmony: solemn scenes of loneliness and suffering are contrasted by a lightness of form and execution. Scarcely colored, the drawings use the wall’s color as a real element of their existence, giving the impression of dissolving into their own background. As many of his subjects are children, a clear message emerges: this is the lost, forgotten generation with a diminishing identity. But Nafir seems to counteract that by documenting their faces, in groups and alone, on all urban surfaces. His involvement in charity work and deep sense of empathy shine through these touching portraits; despair, melancholy, but also pure happiness flourish in Tehran with every new stencil.