A Poetic Pilgrimage To Iran’s Hafez and Saadi Tombs

Found in their native Shiraz, the capital of Fars Province in the southwest of Iran, are the tombs of two of the country’s finest ever poets and minds, Hafez and Saadi. These tombs have evolved with the world and reputations of their poetry, and have long been a popular tourist destination and an emotive pilgrimage for readers everywhere. Discover why, and find two tombs surprisingly full of both literature and life. 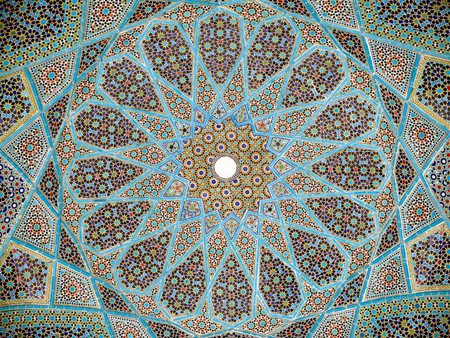 Roof of the Hafez Tomb | © Pentocelo/WIkiCommons

It is a question that has been faced by perhaps every civilization in every corner of the globe: how best to memorialize the life of a political or cultural leader? In trying to answer to this question, nations have produced many of the world’s great architectural triumphs and seminal artifacts. The Great Pyramid of Cheops in Giza, Egypt, for example, was built as a tomb for the Pharaoh Khufu, and remained the tallest man-made structure in the world for nearly four millennia. The memorial to Abraham Lincoln in Washington, D.C, came to represent freedom and unity to the extent that Martin Luther King chose it as the location to deliver his ‘I Have A Dream’ speech from. In trying to memorialize Shakespeare’s death, his friends created one of the most important texts of all time, the First Folio, which brings together all but two of his extant plays for the first time ever. And in trying to eulogize the lives and works of two of their greatest poets, Hafez and Saadi, 15th century Iranians built two tombs that have long since drawn in thousands of pilgrims looking for solace, inspiration or advice from these poetic masters.

Just as how we read and understand literary greats of the past changes through time, so have these tombs adapted to reflect the evolution of the legends of Hafez and Saadi. Both began as small memorials, with Hafez’s tomb constructed in northern Shiraz in 1452, and Saadi’s later in the 1860s. In fact, in Hafez’s case it was the texts themselves that led to the development of larger mausoleums, with successive shahs ordering restorations based upon what they read as omens in his collected works, known as the Divān. However, we have architect and historian André Godard to thank for their current states. As director of the Iranian Archeological Services, he oversaw their renovation in the 1950s, leaving Iran with two grand structures perfectly fitting the grand reputations of these two poets, both within Iran and throughout the world, with each being able to now accommodate triple the amount of visitors than they could before the work of Godard. 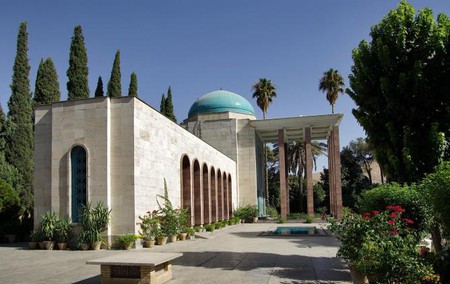 In fact, reputation seems an insufficiently strong word for the impact of these two poets on Iranian culture. It is said that every household in Iran is guaranteed to own two books: the Koran and the Divān (a neat piece of symmetry as the name Hafez itself is a ceremonial name given to one who has memorized the Koran in its entirety). Saadi has an equally strong reputation, generally considered not only one of the Middle East’s finest poets, but also one of its great thinkers. Many still rely on his wisdom, not only by visiting the tomb but also reading his works, of which Golestan (The Rose Garden) and Bostan (The Orchard) are the most famous. 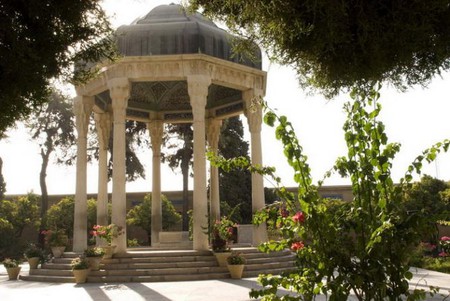 Many seek solace in his aphorisms, many of which call for a universal love and removal of all barriers between each other, a message that still holds as sound advice not only in present-day Iran but across the Middle East and worldwide. We see this in perhaps his most famous work, Bani Adam (Children of Adam), here translated by M. Aryanpoor:

Human beings are members of a whole,
In creation of one essence and soul.
If one member is afflicted with pain,
Other members uneasy will remain.
If you’ve no sympathy for human pain,
The name of human you cannot retain! 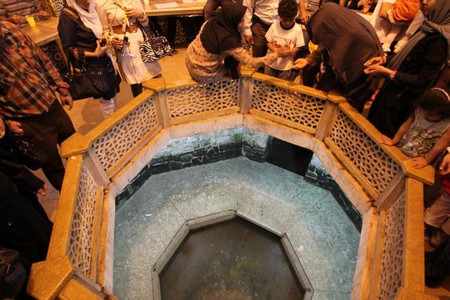 The wisdom of this poem in particular has spread far outside of Iran, with Barack Obama using it in a speech with Iranian leaders, and the message even being inscribed on the entrance to the United Nations building in New York as perfectly summing up its objectives. This shows us why Saadi is seen as such a great thinker in Iran; after all, in Bani Adam he delivers a message of hope for humanity in the 13th century it would take leaders two world wars and nearly seven centuries to express in the establishment of the United Nations.

Their reputations confirmed, then, what about the tombs themselves? Central to Godard’s expansions are the words of the poets themselves. In the Hafez mausoleum, he added 16 pillars to the original four of the 1773 memorial hall, creating a veranda on which are engraved many of Hafez’s ghazals (a four-line Arabic poetic form based on rhyming couplets and a refrain) and excepts from his longer works and poems. The location of the tomb is also central to its literary inhabitant, with the memorial placed in the Musalla Gardens, which featured heavily in Hafez’s poetry. Thus, in a sense what is so wonderful about the Hafez tomb is that it is almost a text in itself, with the engravings of the poetry in the locations in which they were written about really serving to place the visitor within the literary space of Hafez’s poetry. It is no surprise, then, that it has become such a potent place of pilgrimage for lovers of literature from all over the world. 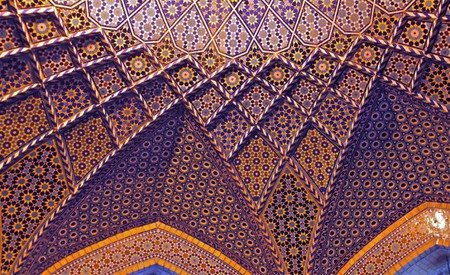 Roof of the Saadi Tomb | ©reibai/Flickr

Saadi’s tomb presents us with a different, but by no means less powerful, atmosphere. As suits a poet and thinker so concerned with issues of universal humanity, life flows through the Saadi tomb. This is the case in its murals, which intricately depict trees of life on beautiful Persian tiles, and in its gardens, where flowers and cypresses grow in abundance almost in celebration of the great poet. Take a few steps down below the tomb and there is an underground water system, used by local people since Saadi’s time and full of fish, which travel through the various channels leading to the central pool.

With all of this, it is no wonder that these have become such popular tourist destinations, offering many experiences for many people just as the work of these two writers too does. These are not only beautiful tombs, but offer unique opportunities to immerse oneself into the worlds of Saadi and Hafez, reflecting in the beauty and calm about the universal emotions and problems that unite us with the past, just as the pool under Saadi’s tomb links us directly to the past through everyone else who has wet their hands in the pond, from literary pilgrims to the great poet himself and even further back into history.