Since leaving her native Iran at the age of 19, Mojgan Endjavi-Barbé has championed the country’s art and culture worldwide. From the creation of a Persian garden in Geneva to the establishment of artist residencies in Shiraz, the critic-curator has fostered cultural dialogue between Iran and the West during a tense political era. Among her recent projects are the Mottahedan Project in the UAE and EBAP, which aims to bring Iran’s young visual artists out of the shadows. 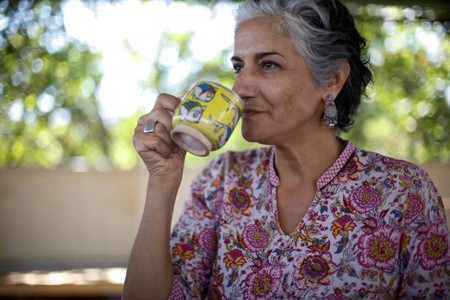 You’re the founder of ILLA, an organisation promoting Iranian culture in all its forms; why did you feel Iran needed this sort of cultural champion? How has ILLA evolved since 2005?

Mojgan Endjavi-Barbé: After having lived in London for ten years, I arrived in Geneva and realised there was not enough representation of Iranian art and culture. So I decided to create ILLA. We organised concerts, conferences, and invited performers of Iran’s oldest theatre style, siah bazi, to come from Iran and collaborate with Theatre de St.Gervais in Geneva. After two years we set up the Persian Garden Association with the aim of creating the first Persian garden in Europe. ILLA was discontinued because the Persian Garden Project was time-consuming and we had to focus on one project at a time.

Can you explain the importance of gardens to Iranian culture, and why you wanted to create a Persian garden in Geneva?

Firstly, the Persian garden in Geneva was a way of thanking the Swiss for their hospitality towards young Iranians coming to Switzerland 40 or 50 years ago up to today, giving them a chance to study and marry Swiss or other nationals and become part of civil society. Persians are gentle people who have a sense of paying back their dues among themselves and to anyone who shows generosity and is welcoming. Secondly, gardens are a little paradise and this project was to give Switzerland an eternal present as a mark of friendship between two nations and in an international city. 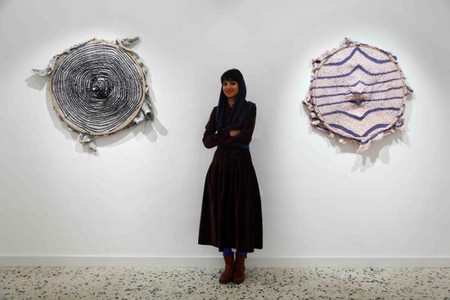 Your latest project is Endjavi-Barbé Art Projects (EBAP). Can you tell us about the project in more detail and what you hope to achieve through it? How exactly is it related to ILLA?

Endjavi-Barbé Art Projects was a continuation of ILLA. I had worked for years with international artists and, while travelling, I realised young talented artists in Iran did not have enough support to enter art residencies or international universities: I felt a platform was needed to help these young artists enter the international art scene. EBAP is the space that finds and helps the young artists in Iran to get to art residencies, enter Western art colleges and group and solo shows at an international level, and we also try to place their work in private and public collections. ILLA was an earlier project on wider cultural activity whereas EBAP is specific to visual art.

Can you tell us about some of the artists EBAP has been working with, and why it’s important to bring their voices to an international audience?

We are pleased to say that last year, two of our young women artists entered the prestigious School of the Art Institute of Chicago (SAIC) with scholarships for their masters programme. Elnaz Javani and Maryam Hosseini entered SAIC because of their talent and promising profiles. These two young women’s success shows how Iranian artists could shine at the international level if only they had an opportunity. When I go to international art fairs and biennales and see how our artists can be among their international peers due to the quality of their works and vision, and how even with so few opportunities in Iran they manage to work at such a high standard visually, I can’t help putting my energy into getting them there. These two young women are just the tip of the iceberg of huge, hidden and unseen talent in Iran. 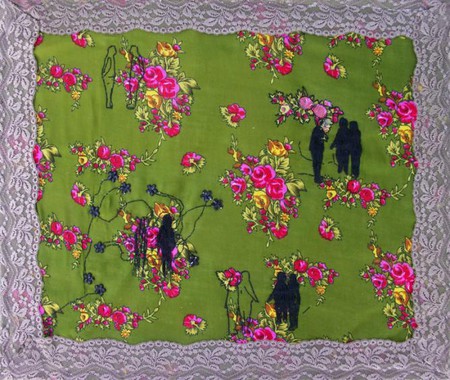 In 2012 you curated an exhibition of Iranian art themed “survival”; why is this theme pertinent for the country’s artists? Does the word “survivor” mean something particular when applied to Iranian artists post-1979?

MEB: Survivals was a group show of a selected male artists and their generation, who survived the revolution, war and daily economic difficulties. It might sound political and attention-grabbing but that was not our intention. We all live in a world and economy where we have to work harder to survive, and even those who are born in the west and get a great education have a hard time getting a job so this word applies to everyone.

You’ve lived outside of Iran for many years. How has this internationalism helped (or hindered) you in promoting Iranian contemporary art and artists?

Having left Iran at the age of 19 gave me the space and time to grow up in a different setting and culture, and made me who I am now. I was born Iranian, studied in the USA and married a Frenchman so I feel like a citizen of the world with Persian heritage, with the added value of speaking several languages. By supporting our young artists, I would like to give these young and talented people the same opportunity and let them see and learn different things; hopefully it will be repeated by them once they succeed in their career. 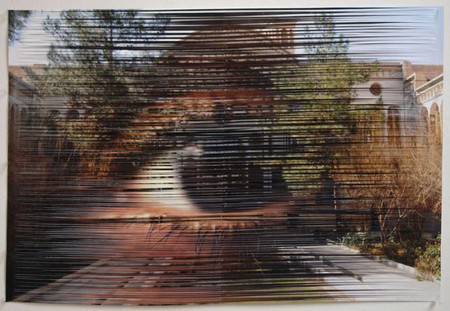 Golnar Adili, The Kng-Seat of my Ee is the Place of Repose for Your Imagination | Courtesy EBAP

Nine out of ten of the top-selling contemporary artists are male, the directors of the blue-chip auction houses are male, and the majority of museum directors are male. Is the art world a man’s world, and how can women challenge this status quo? What particular challenges face women from the Middle East, with artists or art professionals?

I do not see success in the art world as a gender issue. To give you an example, think about the two young women artists who got a scholarship to the Chicago Art Institute. It seems to me that Iranian women artists have an easier time to get into art residencies and universities, from my point of view. I think the most important thing is to work hard, have a good concept, don’t give up trying hard and you will open doors. Being an artist is not easy anywhere in the world simply because there is so much competition out there, but If they have the vision and work hard then being woman is not a handicap and, to my opinion, being a Middle Eastern woman artist could be a positive thing.

How do you see your role in Middle Eastern art right now? Is there anything in particular you would like to accomplish, or anything you wish you’d done a different way?

I try not to function in Middle Eastern vision; I work with Iranian talented young and mid-career artists who have a vision that is universal and not try to get the attention of the public or the market with clichéd, short-lived artworks. I like to surprise Western audiences who walk into an exhibition which I curate and cannot tell the nationality of the artists. The work matters, their vision, and it matters that the quality of their works is comparable to their international peers and artists.

What advice would you give to young women in the Middle East who want to succeed in contemporary art?

To be true to themselves and not to sell their ideas and identity for the benefit of short-term attention in the art world, to work hard and succeed in what they do, to be critical of their own works and attend art residencies to see other artists.