Inside the Shah Cheragh Mosque in Shiraz, Iran

Inside its great chamber of worship, giant chandeliers hang like frozen rain, smaller green lamps jut from the walls and stained-glass windows shine from on high, emitting light that sparkles off countless jewels and shards of glass.

They coat almost the entire interior of this special place, giving its dome a shimmering glow and making its elegant doorways feel like portals.

The shrine contains the tombs of several men who were persecuted for their Shi’a faith during religious strife in the 8th and 9th centuries and remains an important place of worship and pilgrimage. It’s open to non-Muslims, meaning all to visitors to Shiraz can gaze on its shining form. 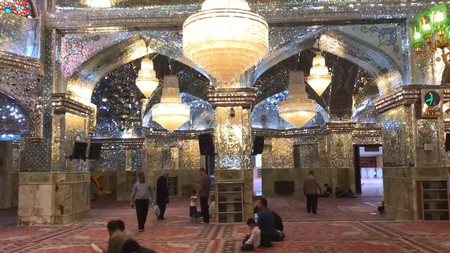 Inside the mosque, non-Muslim visitors will be paired with an English-speaking guide | © Culture Trip

Wine, Shiraz’s most famous export, has dried up, as alcohol is banned in Iran, but there are plenty of sights to gorge yourself on.

The Shah Cheragh mosque itself has tombs and a museum containing several ancient copies of the Quran. Elsewhere, this former Iranian capital has gorgeous gardens and ornate palaces and pavilions. Masjed-e Nasir Al Molk (also known as the Pink Mosque) has rosy tiles and lovely stained glass that give it a dreamlike quality, especially if you visit when the sun streams through in the morning.

There are also museums and teahouses, while the famous ruins of Persepolis are only 60km (37mi) away. Darius the Great’s ambitious city was burnt by fire and buried by sand, but its monuments and friezes are still astounding: they speak of ambition and power, but also of the careful craftsmanship of days long past.

Non-Muslim guests will be matched up with an English-speaking guide on arrival, and women will be given a chādor (cloak). The shrines themselves are also restricted for non-Muslims. There’s no charge for visiting.