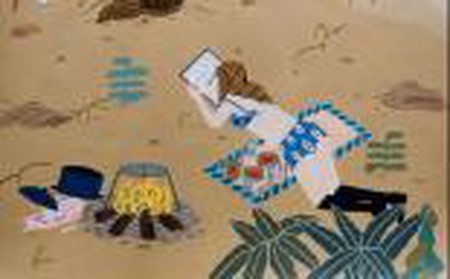 Iran’s tumultuous history and troubled relationship with the West has unfortunately often overshadowed any international recognition of the country’s wealth of culture and artistic innovation. Good News from Iran, presented by Endjavi-Barbé Art Projects in Geneva, Switzerland reveals a fresh and positive aspect to the Iranian contemporary arts scene. 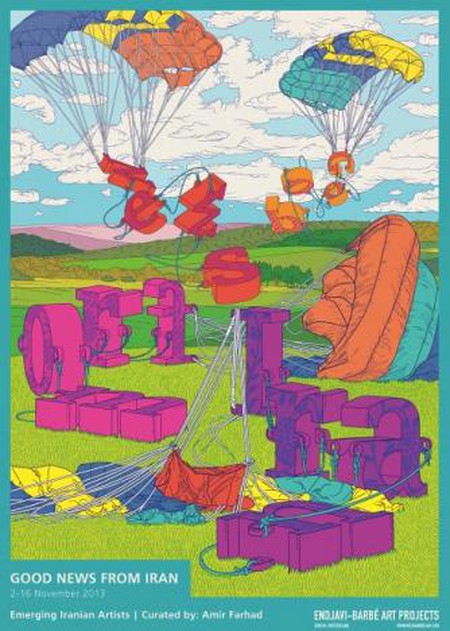 Home to one of the world’s oldest civilisations, the culturally diverse nation of Iran has recently become characterized by political isolation following the 1979 Iranian Revolution. The country’s relationship with the West has been further strained by suspicions around its nuclear program, resulting in UN-imposed sanctions and increased economic seclusion. By portraying the Middle Eastern nation as one of violence and gloom, the Western media encourages widespread distrust of Iranian culture, and consequential ignorance of the impressive cultural offerings to be found here. A new generation of contemporary artists is working hard to break through these negative stereotypes, striving instead to put a positive, empowered face forward.

Good News from Iran (2 -16 November 2013), curated by Amir Farhad and organized by Endjavi-Barbé Art Projects, presents the work of 11 young artists who stand for a young, hopeful force of positive innovation that’s flourishing against the malevolent and fearful stereotyping of their home country. In contrast to much of Iranian art, the exhibition is free of calligraphy, traditional influence or voices of protest. Instead, these artists challenge the viewer’s preconceived notions of Iran through works possessing a fresh and vibrant sense of fantasy. 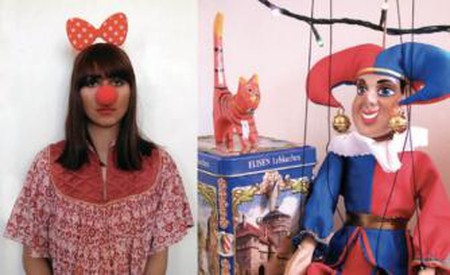 Clown and his assistant, From the People inside of me series, laser jet print on silk paper, 18.5×27.5cm | © Ayada Alizadeh

A sculpture student at the University of Tehran, Iran, Ayada Alizadeh demonstrates the complexity of the human spirit through her work. She describes the motivation for this focus through her own experience:

‘Sometimes I have a feeling different people are inside of me. One who is always angry, one who always tells jokes to people next to him and laughs, one who is complaining all the time. Some days I׳m happy and full of energy like a carnival. Another day I could have so much emotions, feeling like a bird is singing in my heart, another day it feels like a cloud heavy with rain.’

In Clown and his assistant (2013), two photographs are shown side by side. In the first image, the artist presents herself dressed in a red and white patterned dress, a red clown nose, and a plastic, red and white polka dot bow that sits atop her head. Although her costume indicates a joyous state, her expression is unenthusiastic. The second picture shows a grouping of toys: a jack in the box with a small cat perched above, a jester marionette and a string of holiday lights. The contrast between the artist’s mental state (as indicated by her blank stare) against the joyful but lifeless inanimate subjects beside her demonstrates the complexity of her emotions, and the importance of looking at the human face beside the clichéd trope of a given identity. 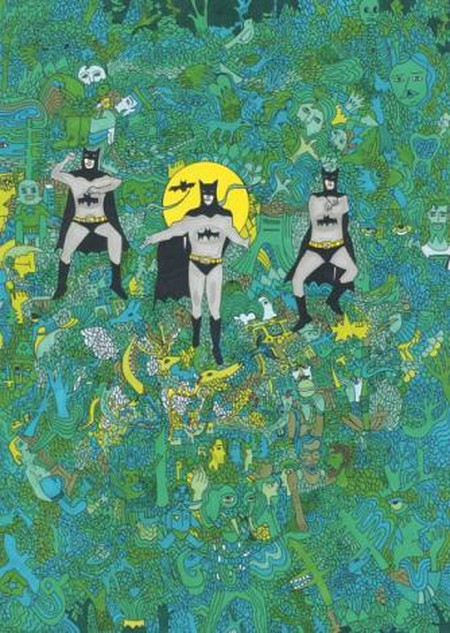 The illustrations of Paris-born Iranian artist Melodie Hojabr Sadat focus on unanticipated moments of lightness. The works are created with an open-eyed awareness of life’s difficulties, and seek to provide a relief for those who have seen the hardships in this world and wish to celebrate the positive. Persian Style (2013) draws from the tradition of Persian miniature making, and is cluttered with whimsical characters and dancing superheroes, which spring forth from a richly colored sea of trees and shrubbery.

Tehran native Negar Fadaei creates paintings from photographic negatives of happy memories captured on film. Family photographs are usually chronicles of pleasant experiences and happy milestones, so revisiting family albums most often evokes nostalgia for times of bygone joy. By replicating the negatives in paint, Fadaei is forced to observe the photograph more closely than one does during the printing process, to more intimately involve herself in the memory. The resulting paintings are primed in black paint and illustrated in light color to resemble the negative itself.

Self-trained artist Habib Farajabadi quotes Robert Morris to describe the simplicity of his paintings: ‘Simplicity of shape does not necessarily equate with simplicity of experience’. Farajabadi is inspired by real world observation rather than by writings and art history, and liberty and improvisation are at the center of his aesthetic. The resulting paintings are uninhibited and childlike, leaning closer to abstraction than to formal realistic compositions. 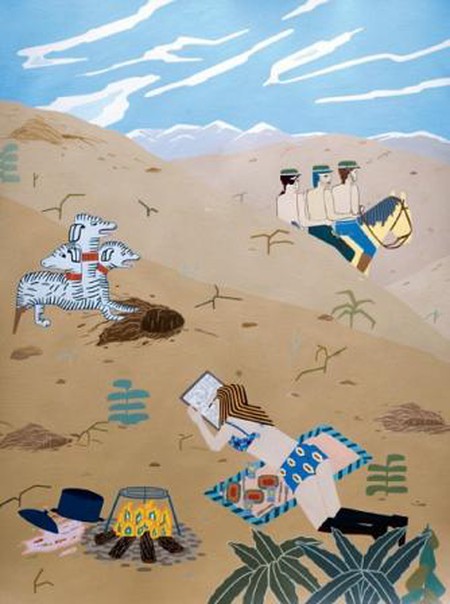 When describing her work Maryam Hosseini lists the Persian Miniaturists, medieval allegorical paintings, biblical scenes by Gustave Doré, French landscape painters, and Rene Magritte as her primary sources of inspiration. Combined with imagery taken from the artist’s own personal memories, this range of influences can be found within a single work, creating a fresh and unusual arrangement of visual elements.

Elnaz Javani works principally with fabric because of its potential resemblance to flesh: just like our skin, it can be moulded, lacerated, torn, wrinkled, shaped, or sewn, and it bears the marks of its experiences over time. Her works are deeply connected to human struggle, yet the violent imagery often associated with flesh is subverted in her work through the delicate quality of the medium. Many of her pieces center on female or cultural identity, exploring the feminine qualities of fabric’s sensitivity and refinement. The artist’s process of drawing with thread and needle, effectively embedding an image into the fibers of the material, facilitates a highly organic, visceral relationship with the process of art making.

The paintings of Tehran-born artist Poorang Pirataei are characterized by bold contours, vibrant hues, and a highly stylized, innocent aesthetic. Using oil, pastel and old cardboard, Pirataei creates imagined worlds in which alternative ideas of human concepts such as love, freedom, peace, hope and dreams might exist. The artist is interested in exploring new meanings for these universal concepts, as he believes that our existing understandings of them have become deformed. 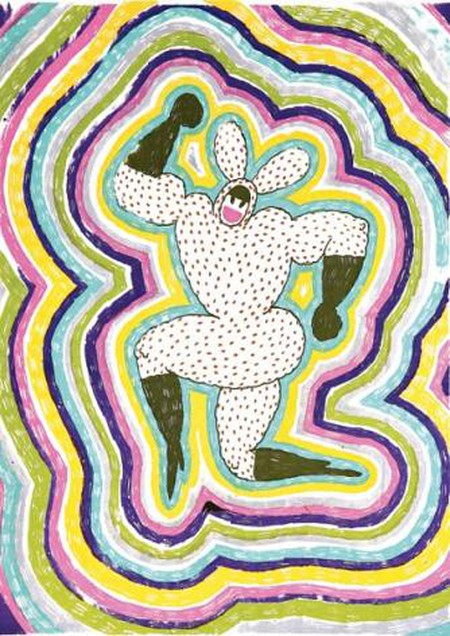 From the Accident behind the fountain series, Silkscreen print and pvc colour on cardboard, 100x70cm, 2013 | © Mohammad Piriaei

In a silkscreen print from Mohammad Piriaei’s Accident behind the fountain series (2013), a muscular figure dressed in a polka dot bunny costume, complete with gloves and heeled boots, is seen enthusiastically leaping into a void of pulsating multicolored rings. This quirky depiction seems free of heavy meaning or political reference, straddling representation and abstraction. Piriaei begins by sketching is his notebooks, developing his concepts through the natural process of working and reworking. He then collaborates with printmakers or ceramicists to complete his projects.

Illustrated using permanent marker on paper, the drawings that compose Ashkan Sanei’s Golden Island series (2012) are pure in their unpretentious candor. His works are composed from the most basic of signs pulled from memory and experience, and are formed in a moment resting between the conscious and unconscious mind. Sanei asks viewers to enjoy his paintings without the search for sophistication in their meanings. 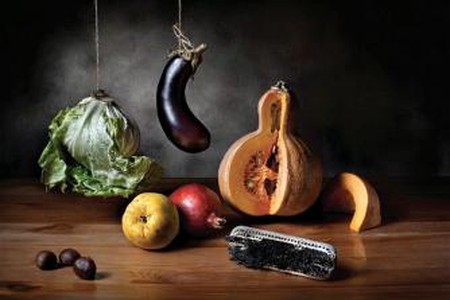 The photographs of Setare Sanjari reference 17th century European still life paintings composed of various fruits, vegetables and household objects. Her works remind the viewer of art in antiquity, while also acknowledging photography’s intention to capture a moment in time in the futile attempt to resist annihilation. Her images are thus used to satirize the idea of immortality, while adroitly balancing historical and contemporary artistic traditions.