“Art doesn’t make judgment, what art does is to make you think,” says Abbas Kiarostami, who is a significant part of the Iranian New Wave as his cinema is allegorical, and rich in philosophy and poetry. Each of his films is a journey to rediscover the ordinary life and to look for deeper meanings at every moment. Through the lens of Kiarostami, social, political and philosophical issues are revisited and questioned. Here are five things you should know about him to connect with his world and vision. 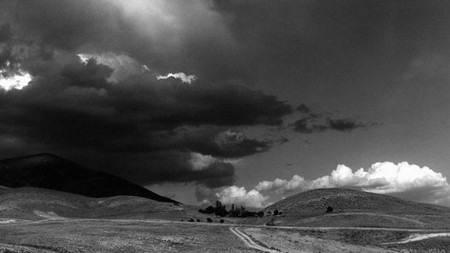 Firstly, Kiarostami is a photographer as well as a filmmaker and often conveys meaning through peculiar framing and composition. When not filming, Kiarostami is taking pictures of roads, trees, snow, doors, walls, windows and anything else that inspires him. His photographs and his films are subtly interconnected. His mesmerizing long shots in movies like Wind Will Carry Us and Taste of Cherry depict a man on a journey through an omniscient point of view, trying to find his place in the universe. The position of his camera is enigmatic: sometimes detached, sometimes a mirror in which the characters see themselves, like in Certified Copy’s ending.

Secondly, Kiarostami is compared to Tarkovsky and Bresson as he takes mystical approach to filmmaking. Films like Taste of Cherry and Wind Will Carry Us shed light on philosophical arguments and pose existential questions. To a great extent, Kiarostami’s cinema reflects on Shakespearean view of life ‘All the world’s a stage”, or life as a movie. He often inserts himself into his films through role-playing and features film sets within his movies like Taste of Cherry and Through the Olive Trees. In Taste of Cherry, Mr.Badii is looking for a way to commit suicide and at the end of the film, wakes up in the middle of a shoot directed by Kiarostami himself. He watches until Kiarostami says cut. Similarly, in Through the Olive Trees, Hossein falls in love with his co-star and continues wooing her on and off camera under the guidance of the film director.

Thirdly, although Kiarostami has experience of working with some great actors such as William Shimel, Juliette Binoche and Homayon Ershadi, he loves directing raw talent to achieve a stronger sense of realism in his works. He believes that working with non-actors helps him to find another dimension to use. In his recent film, Like Someone In Love, he patiently directed Tadashi Okuno who was an extra throughout his life. Through the shooting of Where Is The Friend’s Home?, Babek Ahmed Poor was not aware of filming and acting in front of a camera. Kiarostami subtly directed a non-actor child in order to make him less self-conscious.

Fourthly, women are the most important part of Kiarostami’s recent films. His cinema cleverly reflects on gender issues and desires to portray women’s struggles and concerns. In many of his films like Ten or Certified Copy, female protagonists look for satisfactory relationships and struggle not to get emotionally hurt by men. These movies create enough space for the suppressed and marginalized voice of their female protagonists to speak out, and to challenge the assumptions or paradigms they live in.

Finally, Kiarostami’s body of work is a cinema of questions, as opposed to answers. His films are famously open-ended, as he leaves the real endings to be imagined by the audience. His audience is challenged to actively engage in the process of storytelling and fill in the blanks when the credits roll. Kiarostami shows how good cinema should raise questions and make the audience think.