An Introduction to Traditional Iranian Clothing 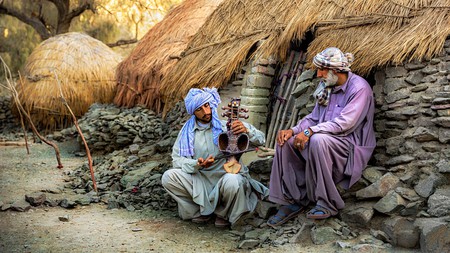 Although the majority of Iranians are Persian, Iran has many smaller ethnic groups, with their own languages, traditions and clothes. With the huge variety of traditional Iranian clothing, from uniquely shaped hats and headdresses designed to trick invaders to eye-catching colour combinations worthy of a catwalk, here we explore the traditional dress of some of Iran’s most extraordinary tribes.

The clothes of the Bakhtiari nomadic tribe are versatile by design, evolved to adapt to the extreme weather conditions they may encounter during migration – from the grassy plateau of the Khuzestan region to the mountainous Chahar Mahal. While men wear tunics, wide trousers fastened at the ankle and wool skullcaps, the women are often seen in colourful, layered skirts paired with matching vests. Their long headscarves are embellished with hand-stitched designs or ornaments. 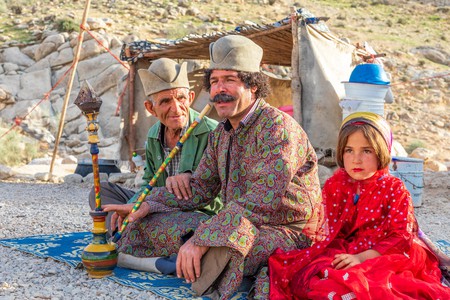 Mainly from Turkic, Kurdish and Arabic origins, the Qashqai are a clan of nomadic tribespeople, some of whom still follow the ancient migration routes. Women are distinguished by their voluminous, multilayered, colourful skirts and long headscarves pinned under the chin, which allow loose strands of hair to frame their faces. The men wear collarless white shirts and long cloaks, secured around the middle by a cummerbund. Their round dogushi, or “two-eared” hats, are made of a sheep’s wool felt and are unique to the tribe.

The Baluch people hail from southeastern Sistan and Baluchestan province bordering Pakistan and Afghanistan; therefore, it’s not surprising that their traditional clothes closely resemble the voluminous shalwar kameez (loose trousers with a long shirt or tunic) worn in those countries. Along with wide-legged trousers and colourful embroidered knee-length dresses, women adorn themselves with gold bracelets, necklaces and brooches, and a second, longer shawl often covers their head and shoulders. Long pants, loose-fitting shirts and a turban are customary for men. 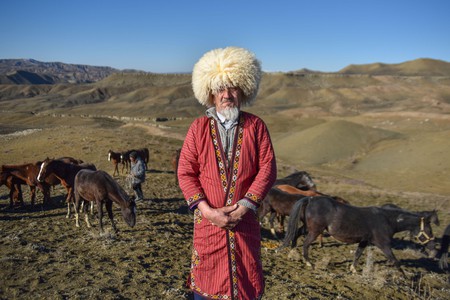 Living in northern Iran for the most part, along the border with Turkmenistan, Turkmen have lived for hundreds of years as a nomadic tribe. Today, they’re more rooted, with many living in permanent homes and tents, although some continue the nomadic tradition. Earthy tones dominate the traditional dress of both Turkmen men and women. Wearing long dresses with open robes, women often conceal part of their face with a cloth hanging just below the nose. Wool hats, worn to protect against cold weather, are the prominent feature of men’s dress.

Kurds are native to Kurdistan, a geo-cultural territory spread across a vast area that spans parts of Turkey, Syria, Iraq and Iran, so it’s no surprise that the traditional dress varies slightly from region to region. One constant is that both men and women tend to wear baggy clothes shaped at the waist by a wide belt. Men wear matching jackets, while women decorate their headscarves with dangling coins and jewels. Sometimes, you’ll see men and women wearing a black velvet hat decorated with amber and turquoise beads or gold and silver charms.

In contrast to Lur men, who favour neutral colours, black felt hats and white shaals wrapped around their waists, women lean towards bright colours, with the trademark stripes hemmed on the cuffs of their trousers. A vest reveals the sleeves of the long dress worn over the top, and after wrapping the headscarf around the head, neck and shoulders, a long piece of it hangs down the back. Highly detailed beading on the dress, as well as coins and beads dangling from the headscarves, make traditional Lur clothes among the most eye-catching.

Native to the northern region of Gilan, the Gilak people are not traditionally nomadic, preferring to farm and raise livestock in the Alborz mountain range and surrounding plains. The women’s dress comprises long pleated shirts layered with black velvet vests trimmed with bright embroidery, and in place of the wide-legged trousers that are common in traditional Iranian dress are floor-sweeping skirts decorated with colourful horizontal stripes. The men’s wardrobe is more muted, with a black-and-white theme punctuated by a bright splash of colour in the socks or wide cotton waistband.

Indigenous to the Caspian region of Iran, the Mazanderani are more modest dressers than some of the other tribes who prefer more vibrant clothes. Women wear black trousers beneath short, puffy skirts and a waist-length tunic-style top, usually embroidered with a traditional pattern across the top. Their headscarves are the most decorative items, embellished with beads and tassels. Men, too, keep it simple, with a plain vest layered over white cotton shirts, tucked into hunting trousers, and dark socks pulled up to just below the knee. 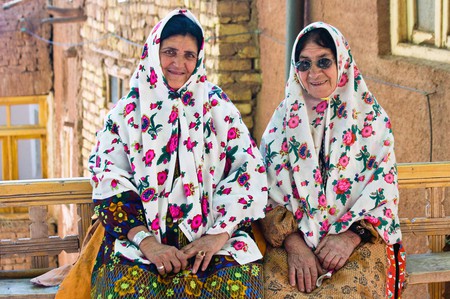 In the village of Abyaneh in central Iran, one of the oldest places in the country, the ageing population has kept the village traditions alive by continuing to dress traditionally. Women don airy, below-the-knee skirts layered over wide-legged black trousers, while their signature long, white floral scarves cover their hair and shoulders. Men also keep up traditional appearances in wide-legged black trousers, colourful vests and wool skullcaps. 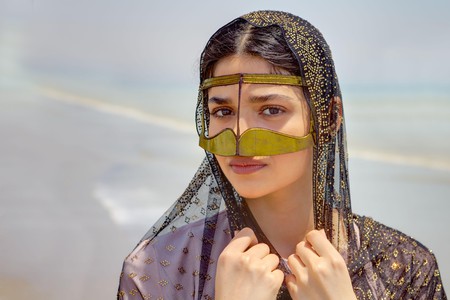 The women in the southern port town of Bandar Abbas and on the island of Qeshm are notable for their brightly coloured, floral chadors (a large piece of cloth covering the hair and upper body) and niqâb, face coverings that come in two types. The first gives the impression of thick eyebrows and a moustache from afar, a ruse used in the past to fool potential invaders into mistaking women for men. The other is a rectangular embroidered covering revealing only the eyes. Many women choose not to wear the niqâb today, but it’s part of a centuries-old tradition that helped protect the face from the wind, sand and scorching sun in these areas.