21 Things to Know Before You Go to Tehran 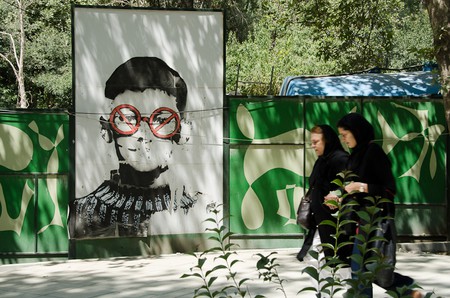 Iran is not the country that mainstream media has been depicting for decades. Its remarkably well-informed people love foreigners, and the chances of being a victim of any anti-Western sentiment are slim to none. Even the most conservative folks distinguish between a government and its citizens. You will be surprised, confused, intrigued, and delighted the more you learn about this country and its culture. Here are 21 things to know before you go.

That means no shorts for men, but short-sleeves are ok. Although the rules for Islamic hijab also apply to female tourists, they are more lax. A tunic or long shirt that covers your bum and a lightly draped headscarf will suffice. Pants should not go above ankle-length, and sandals with no socks are fine. All colors are welcome, and Iranian women, who are very fashion-conscious, wear especially colorful outfits in the spring and summer. 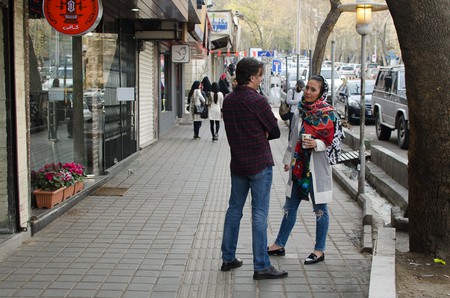 The official currency is the rial

All bills and coins are in Rial, but locals use the term toman. It’s calculated by taking one zero off the rial amount (100,000 rials is 10,000 tomans). It’s also common to simply say 10 tomans to mean 10,000 tomans. Prices are generally written in rials, although many restaurants and cafes use the toman equivalent nowadays. When in doubt, simply ask for the rial amount.

Due to sanctions, foreign credit cards are not accepted and debit cards won’t work at ATMs, so bring plenty of cash to exchange. Some rug and jewelry stores may even accept US dollars or euros as payment, but this is not always the case (especially if they can’t get an immediate exchange rate for that day). 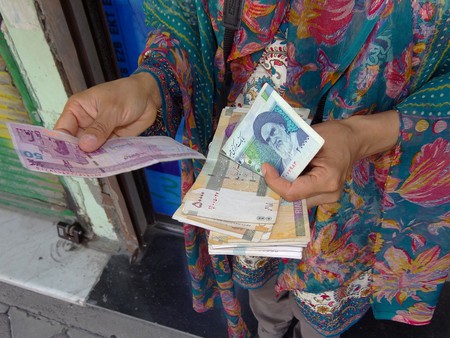 Searching for a parking space and the unpredictable traffic in Tehran account for the majority of tardiness, especially in rainy or inclement weather. As a general rule, you should be on time, but you shouldn’t expect others to.

A complex system of insincere politeness in which one’s true feelings are never revealed, târof is embedded in Iranian culture and can be a tricky one for visitors. While there are many different forms, the one travelers will definitely be exposed to is the phrase ghâbel nadâre, which implies that you do not have to pay. You will hear this every time you pay for something, from taxis to restaurants, and everything in between. Make no mistake, you should always pay.

If you compliment an Iranian on a possession of theirs, they will also say ghâbel nadâre and insist you take it. Under no circumstances should you accept no matter how sincere it seems. Not only will they be relieved that you didn’t take an heirloom, they will also be impressed that you recognized it as târof. Having said this, if they actually buy you a gift, it’s ok to accept.

Even if Iranians appear to be vocal in expressing their views, just listen and don’t give an opinion. 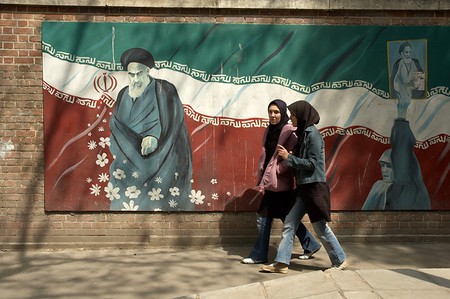 Alternatively, you can buy one at Imam Khomeini or Imam Hossein metro stations. All they need is your ID and you will have a phone number and access to the Internet at any time.

Be patient with the Internet

Wi-Fi and 3G are slower compared to many other countries. If you plan to use social media such as Facebook, Twitter or YouTube, consider downloading a VPN (Virtual Private Network) to be able to bypass the filters during your stay. Instagram, however, is open and extremely popular.

Iran’s answer to Uber, this app currently only serves the city of Tehran. Its best feature? Price transparency for less haggling.

Almost every car could conceivably be a taxi in Tehran. Use only clearly marked taxis (yellow, green, or those with a light on the roof), and negotiate the price beforehand. This is perhaps the easiest and most convenient way to get around the city, but consider using the metro to be among the people. It’s clean and modern (albeit crowded during rush hour), and accesses most major sites. While there is a ‘women’s only’ carriage, it’s not obligatory for women to use it. Don’t be surprised by the numerous vendors selling everything from bras to mascara to kitchen towels in the metro cars. 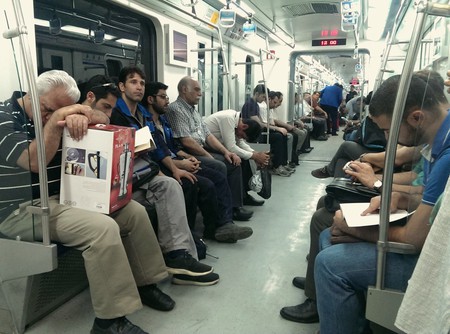 Commuters take a nap on the metro | © Kamyar Adl / Flickr

You will be charged more as a tourist

Tourist attractions have two prices: one for foreign tourists and one for Iranian nationals. Due to inflation, tourist prices are higher, but still very affordable even on the strictest of budgets. Locals are given an equivalent price affordable to them in order to encourage domestic tourism.

Do not flush the toilet paper

The plumbing system can’t handle it, so use the trash can.

Friday is the weekend

When other countries are just beginning their weekend, Iranians are finishing theirs, as Thursday afternoon and Friday are the weekend, and many places may be closed. Closures are also widespread on national holidays, so check in advance to make sure the place you want to visit will be open. 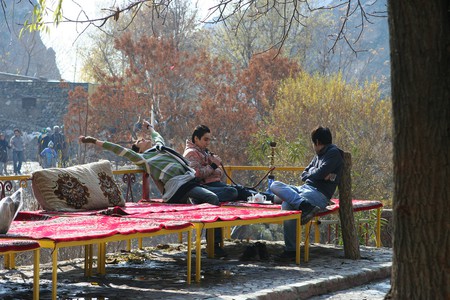 Iranians relax in Darband on the weekend | © Ninara / Flickr

Crossing the street is an adventure in itself

Be sure to look both ways when crossing, even on a one-way street. This holds especially true in the more central and southern parts of Tehran, where motorcycles are plentiful and come from all directions, including the sidewalk. Most drivers will not slow down even if you use the crosswalk, and cars will most definitely not stop or yield as long as you wait to the side. Take a deep breath and cross the street one lane at a time, and you will be surprised by how quickly you become a pro. 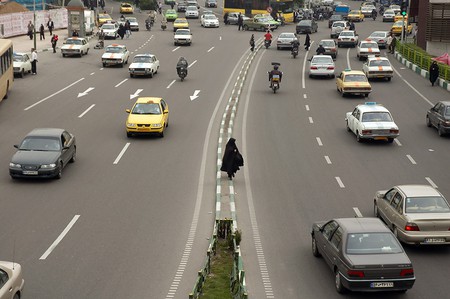 Crossing the street can be a challenge | © Kamyar Adl / Flickr

Tap water is safe to drink

Refrain from any PDA and don’t give the thumbs up

Men and women don’t make physical contact or shake hands with each other in public. It’s best to err on the conservative side and take the lead of others.

The thumbs up is vulgar in Iran, and even though many Iranians are well aware that it’s a positive sign in other parts of the world, try not to use it. Another important gesture to know is when Iranians raise their eyebrows and/or make a ‘nooch’ sound with their tongue. This means ‘no.’

Do not take photographs of any government or military-related sites

This is taken very seriously in Iran. ‘No photography’ signs are usually present, however if in doubt, don’t. 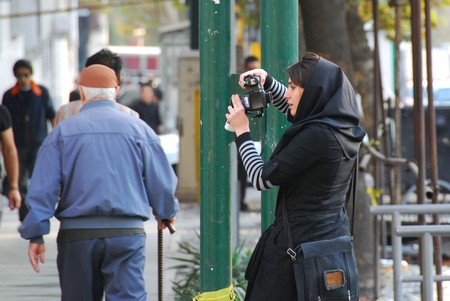 Iranians are naturally very curious and friendly, especially towards foreign tourists. They will ask you many questions, even personal ones, and will be eager to speak and take pictures with you. You may even be invited for a meal out or at someone’s home. While the common sense precautions practiced anywhere remain true for Iran, know that such an invitation is not unusual, and you can comfortably accept, especially if it’s from a family.

There is some great skiing just outside Tehran

Skiing has long been a favorite pastime of middle-class Iranians, and a few miles outside the city are Shemshak and Dizin, the most popular ski resorts. 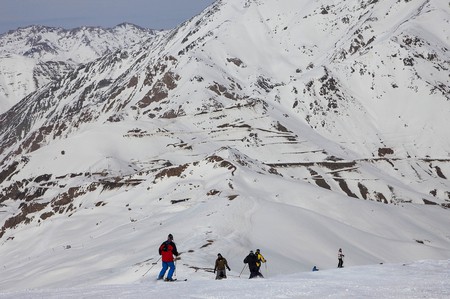 Do not tip taxi drivers. Tipping is not required in cafes or restaurants, but it is appreciated, especially in nicer ones. If you are with a tour guide, especially for several days, it’s polite to tip.

Petty theft is rare and violent crime even more so. Iranians are extremely helpful because you are a foreign tourist, not in spite of it. Ask one person a question, and the surrounding 10 people will also answer. After just a couple of days, that ‘Iranian hospitality’ you’ve heard so much about will become crystal clear. 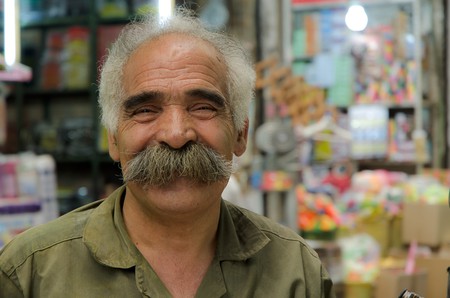 A friendly smile | © Kamyar Adl / Flickr
Give us feedback