The Best Things to Do in Muharraq, Bahrain 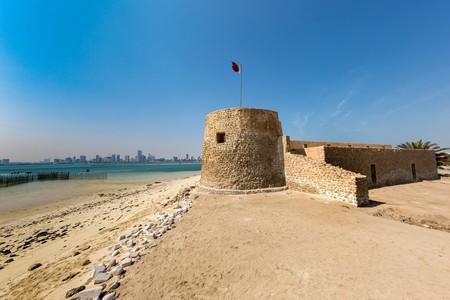 The 2018 Capital of Islamic Culture, Muharraq is the third largest city on the island of Bahrain. The Kingdom’s capital in the 19th century, it has undergone a series of developments since but managed to retain its old-world charm. From strolling amid traditional houses depicting Arab Gulf-style architecture through to enjoying traditional cuisine, the city offers no end of delights – here’s our pick of the best experiences around.

Tucked away in Al Qaisariya Souq, this chic, all-day eatery serves what is a contemporary twist on traditional Bahraini cuisine. Narise Qambar, a national and international award-winning Bahraini entrepreneur, owns this space and brings her creativity and passion for delicious, soulful food to the table. You can choose from an eclectic menu and enjoy a surreal dining experience against the backdrop of traditional houses and forts. The restaurant has another outlet in Manama.

Bahrain's finest freshest and most flavorful breakfast is known to be Saffron! With a variety of savory and sweet dishes combined in 1 set menu, there's a satisfaction for everyone trying it! Pass by us today!

Walking around Al Qaisariya market, you can buy a variety of items ranging from pearls to spices and teas at the many shops dotting the streets. The souq was established by Sheikh Abdulla bin Ahmed, who ruled from 1825 to 1842. The word ‘Qaisariya’ means a type of market established by the ruler. These were typically closed markets with two main doors, one for entry and the other for exit. They would open in the morning and close in the evening in order to protect the market from thieves.

Halwa Showaiter gets its name from the local Showaiter family, which has been whipping up this sweet delight for over 150 years. Gelatinous and prepared in golden, green and red colours, it is garnished with roasted cashews and almonds, and popular with the locals and visitors alike. You can even take a tour of the factory, located bang opposite the shop. A caveat: halwa is only for those with a major sweet tooth and best washed down with bitter Arabic qahwa (coffee) as it balances out the sweetness. If you’re prone to sugar rushes, there is a variety of other interesting options which you will be encouraged to try before you buy.

Muharraq is home to traditional houses, some of which belong to local pearl merchants. Bahrain was a major exporter of pearls during the Dilmun era and beyond. Unfortunately, the industry saw a decline in the 1930s after the discovery of oil in Bahrain, as well as the entry of Japanese cultured pearls in the market. This forced the merchants to move to other areas, but the government took steps to protect and refurbish the architectural heritage of the area. Check out these houses, which are also part of the Pearling Path, a UN World Heritage site, and worth exploring on foot. Three oyster beds located 40 to 70 km (25 to 44 miles) off Bahrain’s northern shores also form a part of the Pearling Path. 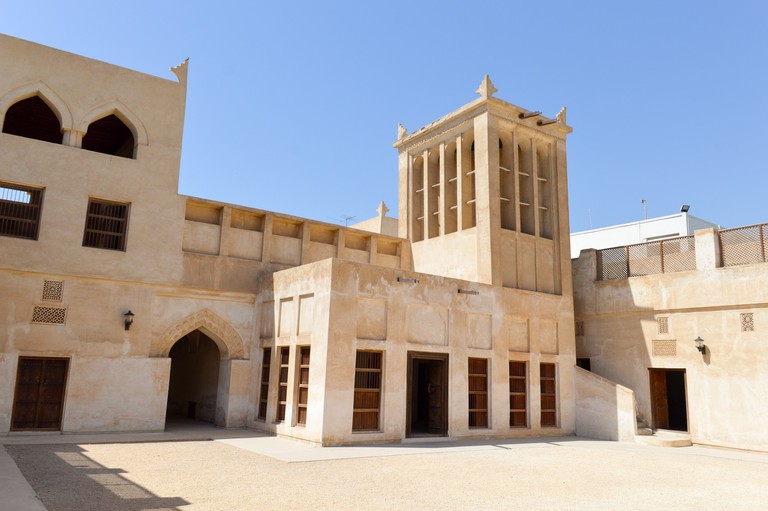 Considered to be the oldest building in Bahrain, this house was built in the 1800s for the royal family and features four courtyards, beautifully carved wooden doors, and perforated gypsum panels. The wind tower is its most prized feature. If you’re too hot from all the walking, just stand in the area of the house that falls below the tower to enjoy the cool breeze for free!

Established in 2007 to preserve the dying and unique art of Kurar (gold thread) embroidery, this building provides a venue for elderly Bahraini ladies to hand down their skills to younger generations. The art is based on teamwork and carried out in the presence of a head woman – ‘Qataba’ – and two or three other women – ‘Dawakheel’. The building has a traditional courtyard style design with wooden carved windows and is a great place to interact with Bahraini women and learn about their craft. It’s best to call before you visit to ensure that the women are there at the house at that time. 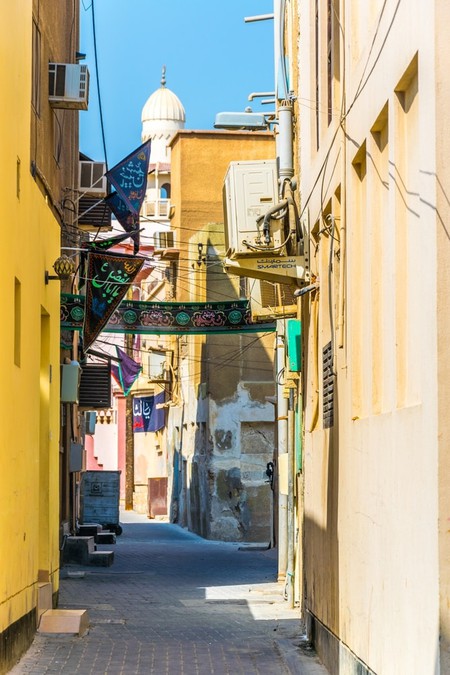 This museum commemorates the achievements of the Bahraini singer and musician, Mohammed bin Faris. Sut music originated in the Arabian Gulf region, and Faris’s compositions gave it a particularly Bahraini form. The current structure is a reconstruction of the original house at the site. The music hall located near the house often hosts musical evenings and folklore troupes. 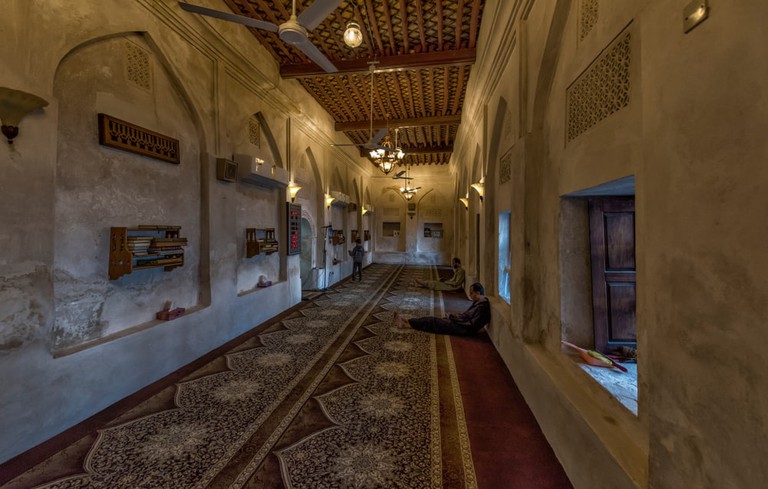 Belonging to the pearl merchant Abdullah bin Isa Siyadi, this building includes a mosque and Majlis (a place for special gatherings). The merchant’s grandson still lives here, but you can visit Siyadi mosque where daily prayers are conducted even today. It is the oldest and preserved mosque in Muharraq.

Be inspired by art at traditional galleries

Busaad Art Gallery, the former home of artist Ebrahim Mohamed Busaad, is beautifully restored with elaborate wooden balconies. You will find the artist’s colourful, bold artworks displayed here. There is a gift shop that you can visit too. If you follow Airport Avenue towards the airport and close to BBK bank, you’ll find the multiple-award-winning artist, Rashid Al Oraifi’s former home. Now a privately owned museum, it displays artwork capturing the spirit of the Dilmun era in an abstract manner. You can buy books, postcards, mugs, and jewellery bearing Oraifi’s art at the museum’s gift shop. Maison Jamsheer is yet another traditional house turned into an art gallery and hosts a range of cultural events. 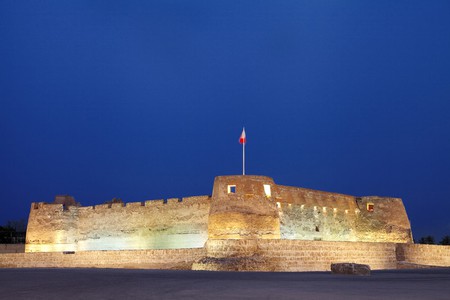 Bu Maher Fort, which was built in 1840, is steeped in seafaring and pearling history. It’s the first stop in the historical Pearling Path, having once served as the main fishing harbour and gateway to and from the sea. You can take a boat from the Bahrain National Museum harbour to access the visitor’s centre at the fort. Then there’s Arad Fort, which was built in approximately the 15th century. It was located on a separate island back then, which has now been joined to Muharraq. It’s better to visit after sunset, when the lights go on and the structure looks breathtaking with its Islamic-style architecture. Keep a watch for the seasonal cultural festivals hosted here throughout the year. 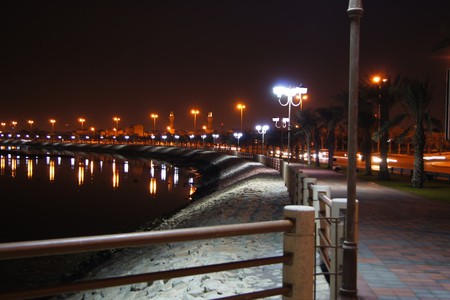 Get some fresh air at the seaside

Dohat Arad Park is a 3 km (1.9 mile) walkway where fitness enthusiasts come to jog and exercise every day. If you visit during the early morning, it’s less crowded and you may spot local birds along the rocks. Prince Khalifa bin Salman Park in Hidd is also a great place to rejuvenate; it’s got patches of green grass where you can relax and watch people walk, as well as a play area for kids. Children can even rent bicycles and tricycles for a nominal amount but make sure you have a photo ID of some sort to show. There is some exercise equipment including stationary cycles as well. Don’t forget to enjoy the amazing view of the sea and Bahrain’s skyline from the tower café. You will have to pay a BD2 (about USD$5) entry fee which includes complimentary food at the café – though the menu is rather basic. 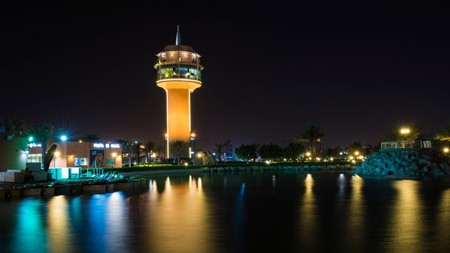 Located right next door to Bahrain International Airport, this award-winning 5-star property is the first hotel to mark the skyline of the historic town of Muharraq. A blend of Swiss hospitality and Arabian traditions best describes the ethos of this place. Silk’s restaurant at the hotel is known for its Monday Seafood Night, so make sure you try it. In fact, it’s a perfect culmination of the island’s maritime tradition. The hotel’s poolside terrace seating at Flamingo Lounge is a great place to unwind with its extensive wine cellar and entertainment by live music bands.

Seef Mall’s second property in Muharraq is a great place for a family day out with its many well-known fashion and beauty brands, as well as a roster of exciting food outlets. Another option is Dragon City, a unique mall in Diyar Al Muharraq, which is a group of seven artificial islands located in Muharraq. It has numerous retail and wholesale shops, selling Chinese goods right from jewellery and household items through to electronics and clothes. Wear comfortable shoes because you’ll have to walk a lot. That being said, there is a food court in case you get too tired. 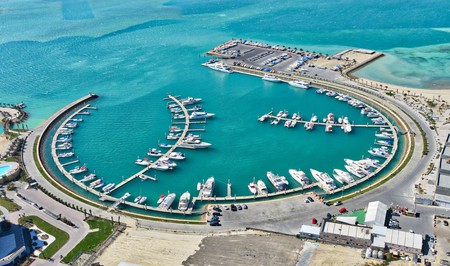 Spend a day at Amwaj Islands

This group of man-made islands near the coast of Muharraq is well-known for its plush residential buildings, as well as restaurants and beach activities. The Lagoon, located in the heart of the islands, has many restaurants serving all kinds of cuisines, as well as cafés, all of which stay open late into the evening. Cultural markets with stalls selling artwork, accessories and other items are also hosted here. If you’re an animal lover, visit the Aziza Bird Kingdom, home to over 70 different species of birds, many of which are endangered or rare.

Visit the original Al Hedaya Al Khalifiya School building in northern Muharraq. This boys’ school was established in 1919 and represents an important milestone in the history of modern education in the Kingdom. Prior to this Quranic schools were the main educational institutions in the country. The Bahrain Authority for Culture and Antiquities, in cooperation with the Ministry of Education, is overseeing the complete renovation of the building and plans to transform it into a museum. There are plans to rebuild the Al Khalifiya Library too, which is one of the first public libraries in Bahrain.