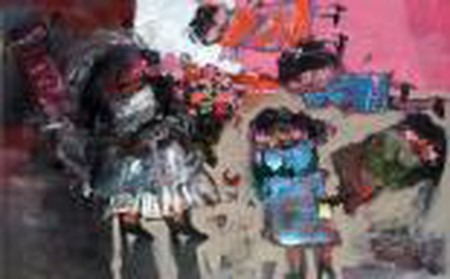 Abstraction and the freedom and naivety of children are touchstones of Bahraini artist Mohammed Al Mahdi’s works, which also attempt to use this framework to interpret grief and trauma in new ways. Arie Amaya-Akkermans looks at the work of Al Mahdi and other artists who have self-consciously evoked a ‘childish’ form of expression. 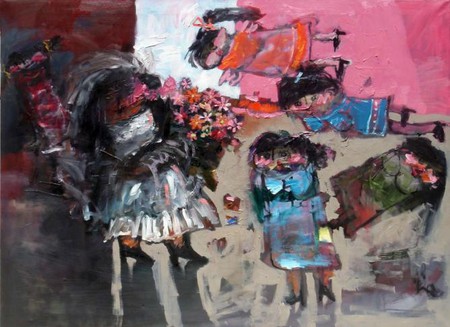 Works of art are not only ensnaring objects of contemplation. Artworks are also ensouled things, to use a metaphor of Agnes Heller. Being ‘ensouled’ as a thing is quite distant from the painting object that Manet discovered in the 19th century. Specific works of art acquire a ‘personality’ so to say, or can be made ‘human’ as Heller explains through a reading of Kant: ‘If a work of art is also a person, if it is ensouled, then the dignity of works of art can be described in the following way: The work of art is a thing that cannot be used as a mere means, for it is always also used as an end in itself’.

One could argue about the ontological status of things vs. objects without ever coming to a safe conclusion, but it suffices for now to speculate that objects (in painting) refer to self-standing entities that hang somewhat suspended, whereas things form within an ideography that could be very well conceptual, figurative, thematic or aesthetic. Contemporary art loves ‘things’ without having a concrete hierarchy – not even an aesthetic one – to approach them. Yet to become ensouled, artworks demand more than to be contemplated; they must be experienced: the illusion of memory, loss of speech, re-enactment of pain, the contours of joy, the miracles of love.

I know some artworks like this; for example, the exhibition Black and White of Picasso at the Guggenheim and his Guernica, or Magritte’s L’Empire des lumières. These artworks speak to me with the weight of memory, and the illusion of being suspended in time. I have not only contemplated them but have also participated in the experience of beauty – symbolic or not – that they emanate from, and this participation – just like participation in reality – demands the experience to be shared with others. These paintings are associated with concrete memories: The desire to travel to New York at a certain time in the fall, a journey to Bahrain, the birthday of a friend, the tragedy of loss. 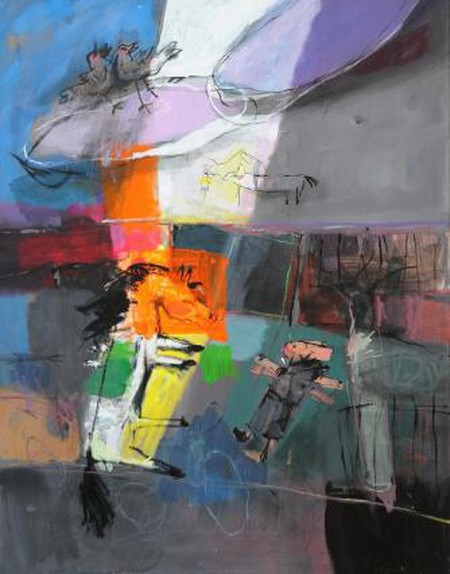 When works of art become ineffable and inscrutable, we have entered a realm in which the narratives associated with them – for an individual – evaporate and leave only traces to be followed. Art is then experienced not as a configuration of things but as a morphological transformation. In the words of Julia Kristeva: ‘What is so terrifying about it is that it is so terribly clear and such gladness. If it went on for more than five seconds, the soul could not endure it and must perish.’ Is it possible to stare at them directly once again without being protected by the comfort of interpretation? Perhaps not. But the interpretation of art is like the interpretation of dreams: It doesn’t cure; it only prevents madness.

The procedure of the artist is different. He must not be afraid. He must continue staring until the intoxication is ready to flow out into the universe of its own accord. In contemporary art, there is a certain vanity to state that creation departs from dots, lines and planes alone, opening the vaults of consciousness into primal forms and abstractions that are optically irreverent. Yet Picasso is quick to remark: ‘There is no abstract art. You must always start with something. Afterward you can remove all traces of reality.’ And this is how Bahraini painter Mohammed Al Mahdi has conceived his entire artistic production: Journeying unprotected through hostile and often fading memories.

On July 10th 2007, Bader Jawad Hussain Mubarak, a three-year old toddler vanished from his home in Samaheej, Bahrain, while playing outside. He was last seen by his family at around 1.30 PM and an hour later, disappeared without a trace. The local police began an investigation round-the-clock that lasted for several months, and as late as 2011, although the family had not given up hope or the constant search and the police continued following leads, no signs or traces of Bader had been found. Simply vanished. The Bahraini painter was so touched by the story that he took on the task to capture the memory of the toddler onto a canvas.

The artist comments: ‘I was very saddened by the issue and needed to express my feelings so I did a painting with Bader’s photograph taken from a newspaper clipping and I drew symbols representing his mother and family members who are still looking for him.’ Is this not a rather crude procedure? One would be tempted to ask. But upon questioning his paintings – And I did that only once, sitting alone for an entire afternoon in the storage room of a gallery in Bahrain – one is compelled to let go. To abandon. To surrender. It becomes necessary to enter the fragmentary universes that are presented to the eye as the drawings of a child, yet intensely charged with melancholy. 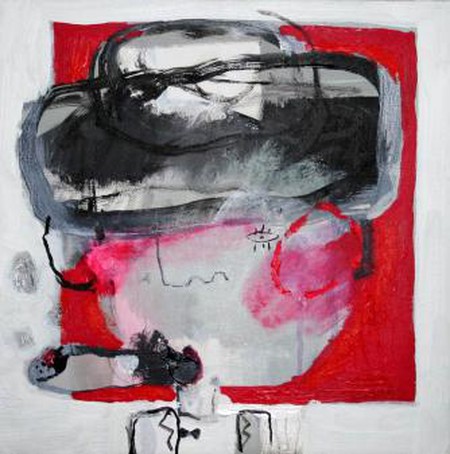 The relationship of the painter to children in general and to the child Bader is not born out of coincidence: as a child, he was hit by a speeding car and rested in a hospital bed for a long time, taking on the pleasure of drawing as a pathway to work out his traumatic experience. One can think of Frida Kahlo, struck by a car accident at the age of 18, sitting on her bed and painting through the night; however, as Kahlo’s characters turn crystalline but altogether icy, she circumvents her sense of loss through a process of disassociated selves. Al Mahdi, on the other hand, is an unrestrained topographer of his own life. ‘painting is just another way of keeping a diary’, remarks Picasso.

‘Childish’ painting, mistakenly associated with fantasy and fairy tales, is a recurrent theme in great masters such as Picasso and Chagall, and to a lesser extent, Kandinsky. Picasso painted children from direct observation, leading the way towards symbolic forms that would unabatedly capture the consciousness of the eye without crutches to lead one through. The world of Al Mahdi, on the other hand, though sharing with Picasso the desire to shatter the equilibrium of stable living spaces, is created out of a syntactic imperfection; his own. From Chagall he might have learned the dream-like appearance of rooms and household items, but he allows them to retain their morphological independence from each other, as things.

There’s but little of infantile in painting through childhood memories: they attempt to re-locate the abstract boundaries of the self in a world of fundamental joy and innocence that yet is filled with the content of horror and pain, fear and lust, contingency and luck, without ever forgetting the initial vision. For the contemplating adult, his paintings liken those of the psychotic and the mad: they are unable to recognize the filters of reality and experience it without any of the mediations offered by comfortable interpretations and social norms. It is not possible to enter his paintings as a stranger and walk away from them in the same way. Against flat pastel-white and black backgrounds, lurks the uncertainty.

His acrylics unfold without specific time and location, suspended in a continuum of memory, from which it is impossible to flee into the safety of the historical and the chronological. In an informed essay about Al Mahdi’s painting, Farouk Yusuf explains that in the apparently innocuous images, ‘the creatures of Mohammed Al Mahdi are [set] as traps, set to capture specific preys’. Life is seen as a continuous re-birth in which the pastel-colored energy bifurcates into both creation and destruction, imploding from all directions. The procedure is at once gloomy, ethereal, ecstatic and mysterious: ‘His creatures are cut loose and standing apart with the secrets they hold.’

But the painter has placed himself at severe risk. The invasive journey into his memories has gone too far; he cannot return to mere representation and has become a prey of his own trap. Out of this alienation, the canvases speak in sign language and ask for a ransom: They want to bridge a gap between his own discursive orders and those of the contemporary eye in general.

His work is a long series of inscribed quotations from the raw materials of life, in a singular montage in which it is no longer possible to distinguish the source and the destination. ‘Who knows which waters one will swim through in the future? No one will. And that’s the beauty of it, the beauty of myriads of possibilities’. But the artist doesn’t let go, he clings on forcefully. He wants to keep everything, everything that has already passed, everything that has already happened, the most casual and mysterious things: toys, scraps of paper, voices, fresh air. The pain of forgetting is what fuels his brush with fire, and Picasso comes to his aid: ‘Everything you can imagine is real.’