While Bahraini painter Faika Al Hassan was preparing for The Universe of a City – her 2010 exhibition, which revolved around the constant mobility of people looking for security and certainty – she began working on a painting that laid the foundations for her subsequent endeavour. Arie Amaya-Akkermans looks at the development and inspiration for her series Not Entirely Red.

The circular movement of Faika Al Hassan’s paintbrush in motion and the red colours she was using while painting The Universe of a City reminded the artist of the fez, the traditional Moroccan hat of Ottoman origin. Shaped either as a truncated cone or a short cylinder, it is made either of red felt or kilim fabric, and is inextricably linked to not only its hometown of Fez, but the whole of Morocco as well. ‘I began to recall my memories of Cairo, and how fascinated I was with the fez that I used to see a lot at Khan El Khalili’, says Al Hassan.

The major souk in Cairo’s Islamic district, the Khan El Khalili, dates back to the 14 th century and provides the perfect setting for the visualisaton of the contemporary Middle East. Celebrated in Naguib Mahfouz’s 1947 novel, Midaq Alley, it’s imbued with wild eroticism, restlessness, a state of permanent wakefulness, and the melancholy of a past half-passed, and half unable to pass. Here too the history of the fez as a singular object is noteworthy. It was first made fashionable in the 17th century by the Moors in Fez, and was later introduced into the Ottoman Empire in 1826, as a means of replacing the traditional turban. From its original usage associated with the Ottoman military, the fez spread throughout the Empire and beyond, to Cyprus, Greece, the Balkans, as well as Muslim communities in South Asia, among other regions.

As the artist notes: ‘they used to be worn as a sign of respect … the idea of the fez ‘solidified’ while visiting my best friend last year in Damascus. I commissioned the best craftsman in the industry to make around one hundred and twenty fez pieces in the traditional style, and then cover each one with the white solid paint that is ground to cover canvas. This all happened before the uprising in Syria, and as a result of countless experimentations and tests. All the pieces were then sent to me, and thus I began the journey of my exhibition, titled Not Entirely Red.’

Al Hassan paints objects – in this case, depicting the fez in paintings, and painting on fezzes – not so that they serve as mere adornments, but with the intention of interpreting and understanding the spaces surrounding them. When the artist, a Baghdad-trained economist by profession, took up painting lessons at the Bahrain Arts Society – the usual pathway for Bahraini artists in the absence of a proper art school – she began experimenting with the traditional genres of painting (i.e. still life and landscape) taught in the Arab world. However, since Hidden, her first solo exhibition in 2007 at Albareh Gallery, she has developed a particularly unique style. It’s novel in its use of symbolism, lying somewhere between expressionist and abstract, yet it still retains a figurative quality in its employment of delicate lines and shapes. Such elements reveal their true forms, and bring to the forefront archetypes, everyday objects, and thoughts, rather than simply images.

The traditional pictorial space fades and dissolves unto itself in Al Hassan’s paintings, in a gesture that at times brings to mind the texture of cloth, impressionist landscapes, and a photographic montage. The small people that appeared in Universe of a City, in her investigation of how people shape the spaces they dwell in rather than the opposite, reappear in Not Entirely Red. The artist confesses that her ‘figurines’ are wholly abstract and symbolic and in observing them, one can see a classical, miniaturist tendency. ‘Those were small figures representing the ones that were mentioned in poetry. I have used my own style, and perhaps unconsciously, I was influenced by those miniatures as I am an avid reader of poetry’.

Regarding the disappearance of the ‘pictorial space’ in modern painting, the French philosopher Michel Foucault remarks, with reference to the work of the impressionist painter, Manet: ‘… He [Manet] made a representational play of the fundamental material elements of the canvas. He was therefore inventing, if you like, the ‘picture object’, the ‘painting object’, and this no doubt was the fundamental condition, so that finally one day we could get rid of representation itself, and allow space to play with its pure and simple properties, its material properties.’

The space on the two-dimensional surface of a painting is that optic illusion, which appears to recede backwards into depth from the plane of the image. Since the Italian Quattrocento in the 15th century when the pictorial space formally made its appearance, it was a tradition to make the viewer forget that the three-dimensional space inscribed in a two-dimensional surface was precisely that: a fragment embedded in a material space. This optical illusion was achieved by a regular light that came from within the canvas, and which relied on a monocular perspective that made the human eye the centre of the painting.

A change came about with Cézanne and Manet, when painters began to work with, and depend on, the materiality of physical space rather than a perfectly enclosed room with fixed points of light. ‘What I am looking for, instantaneousness … The same light spread throughout, the same light, the same light’, remarked Claude Monet in 1890. Eventually, this process fully materialised with the realisation that, in the words of the philosopher Maurice Merleau-Ponty, ‘it becomes impossible to rigorously distinguish between space and things in space’. Space was no longer conceived merely as a surface, but as a field that encompassed the whole physical universe; and the human eye, so limited, seemed so unsuitable a device to survey it fully.

To paint objects in a world of new, enlarged visions became a practice that came about only slowly and had little to do with the still life of the classical world or the Dutch painters of the 17th century. This is because in these paintings, objects were not part of compositions, but rather self-standing figures with a principle of self-reference. The question was, how does one paint an object in isolation? What would it look life? Suspended? Fixed? Attached to something? Merleau-Ponty insists that though paintings resemble the world and the objects therein, they are not meant to represent or resemble the world; rather, they should stand as worlds of their own. 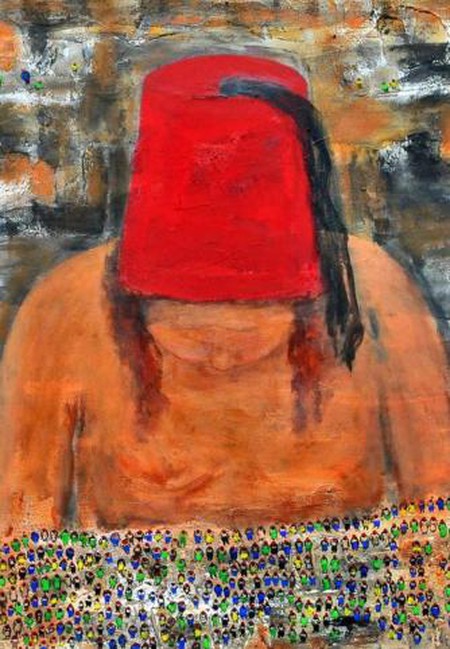 The small object worlds that appear over and over in the pieces in Al Hassan’s Not Entirely Red reflect simultaneity in thoughts being shaped by objects and objects being shaped by thoughts. The fez isn’t merely an object here, but rather something fully immersed in the space wherein it happens to appear – a mirror of thought and contradiction; and is contradiction not the basis of everything that is rich about human thought? The painted fez mirrors what we would see if one could peer into someone’s thoughts by a gesture as effortless as uncovering their head; yet, these thoughts appear in a world of shared meaning, where we exist together with others – that is, the small figurines that characterise Al Hassan’s paintings. ‘They are either moving together in a group, or in different directions, meaning that they might not share the same opinions or views. I often ask in my dreams why people do not live together peacefully’, she says.

There is no pure space here that can be seen or judged from a distance; rather, one has to become immersed in the painting, to replace mere resemblance or representation – of a woman, landscape, hat, anything – with the feeling of its lived experience: the experience of an unfinished world. At the same time, however, there seems to be little or no arbitrariness in her work. The very large-scale paintings – some of which are as high as four metres – are coherent compositions in uniform strokes.

It is a rarity in the Middle East – and particularly in the Gulf – for a woman painter to complete the whole journey from landscape and still life to expressionist and abstract styles, and although she is not the only painter of her kind in Bahrain – being in the company of such distinguished artists as Rashid Al Khalifa, Balqees Fakhro, and Omar Al Rashid, for instance – contemporary art from the tiny island kingdom remains largely unspoken of.

Modern paintings are like a field of objects which approach one only one at a time, and whose totality is unlikely to be digested in one glance. Paintings require many eyes, many perspectives, many details and associations that carry deeper relationships. These are what Faika Al Hassan’s paintings provide and they appear as continuously unfinished works, born the moment they’re gazed upon. In the words of Merelau-Ponty, ‘Essence and existence, imaginary and real, visible and invisible – painting blurs all our categories, spreading out before us its dreamy universe of carnal essences, efficacious resemblances, muted meanings’.