Impossible Homelands: Belonging In The Art Of Camille Zakharia

The question of identity and how we define this in relation to our sense of self and heritage is one which artists have explored for centuries. Arie Amaya-Akkermans explores this idea against a Bahraini backdrop, looking specifically at how the contemporary artist Camille Zakharia depicts the struggle to grasp a sense of ‘belonging’ in modern Bahrain. 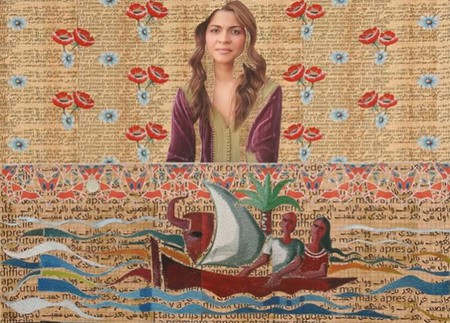 It all started with a conversation. An Italian woman at the international airport in Doha, like me, was awaiting a flight to Bahrain. ‘Where are you at home, then?’ I asked her, after listening to her story. Currently living in Rome, she told me that she commuted to Bahrain – nearly 4,000 km away – every couple of weeks to spend the weekend with her husband, who himself made a journey every day from the island’s western coast to Saudi Arabia’s Eastern Province, via the Saudi–Bahrain causeway. ‘To be honest, I don’t know, really. I guess I’m at home when I’m with my family’, came the ambiguous reply.

Our conversation was pleasant and harmless – an event without a past or a future. I never saw her again, nor did I ask her name. We smiled at each other from afar, as if we were somehow nodding in agreement. While boarding the plane, I overheard her next conversation, this time with an American businessman who was in a similar situation as hers. Though the world often seems borderless, interconnected, and limitless, it is also instantaneous and fleeting. Nowhere can this be better observed than at an airport – a man-made world of aluminum and steel giving the illusion of overcoming time and space; a permanent state of transit.

Being in transit is a state – not just a moment – that begets the question: what does it mean to be at home? What does it mean to be a foreigner, too? The Italian woman, for instance, found her home in a time, not in any specific place. The idea of the ‘place’ – of ancestry, of origin – has today been eroded by our being in-between conflicting spaces; we must occupy them and appropriate them, fill them with ourselves, flood them with vestiges from other places. Above all, we must share those spaces with others, too. The feeling of being at home in one’s solitude is different from the sense of extreme loneliness that often invades modern cities and contemporary cultures.

‘I would like there to exist places that are stable, unmoving, intangible, untouched and almost untouchable, unchanging, deep-rooted; places that might be points of reference, of departure, of origin’, once wrote the French writer Georges Perec. But is having a ‘home’ always good? Is it always the site of happiness? In response to Perec’s longing, the Hungarian philosopher Agnes Heller poses a question: Home sweet home – but is it so sweet, or has it been so sweet? The familiar fragrance can be the smell of burning flesh. The familiar gesture can be the hand raised to beat. The colour can be dark and grey. Home is where we were weeping, but no one listened, where we were hungry and cold. Home was the small circle one could not break through, the childhood that seemed endless, the tunnel without exit. Belonging to a place can be painful, sometimes, and having an identity, a burden. 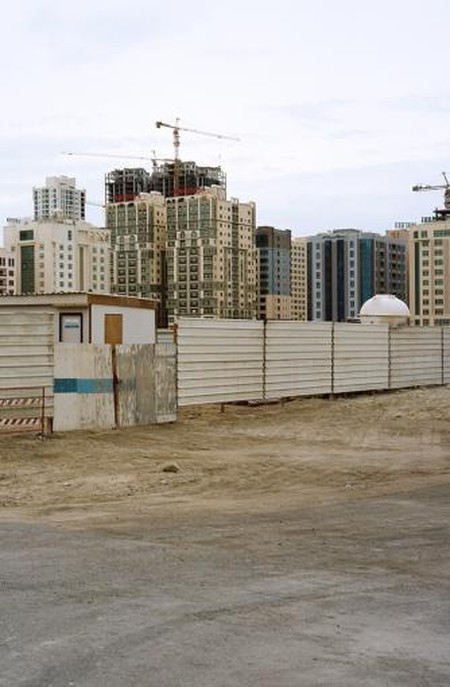 And then there’s Bahrain. Perhaps it is the wrong place to confront such questions. One’s visual impression of Manama is always infused with an acute understanding of its formlessness. The old city, once the heart of a multicultural port society lies dormant and neglected, facing land reclaimed from the sea and engulfed by a belt of vertical developments, continuously shifting and manipulating the configuration of space into an extension of lapses – sometimes of emptiness, of warmth, of depth, or of elevation. Constantly under construction, the country is an unfinished, open-ended project; everything is possible, anything can happen.

Despite such voids, however, it is only in Manama that one has the opportunity to see the Lebanese artist Camille Zakharia, the ‘broker’ of memory sites. Born in Tripoli, Lebanon, and one of the many exiles of the proverbial Civil War, he is both at home and in transit in Bahrain, after having immigrated and emigrated several times. His ‘memory sites’ are built with bricks of negatives, and prints and paper woven into complex historical tapestries, which exist in different times simultaneously. But this isn’t obvious at first sight; it is only with time that one discovers how this skilled archaeologist of the present tense captures the already fading moments of an island that wants to disappear into its own absolute future.

This absolute future is as present-less and empty as the large plots of sand separating one development from the next, serving no particular purpose. They are not parks, public spaces, or even privately-owned. All they indicate is an uncanny spatial freedom, an absence of markers and boundaries. Zakharia, the photographer-cum-artisan is a reference for the historical Bahrain that flees too rapidly to be traced adequately. He photographs murals, asphalt, graffiti, cityscapes, fishermen huts, empty spaces, and filled spaces. There is no way of knowing if the otherwise ordinary objects he captures will be there tomorrow.

Amidst the constant transformations and the ‘re-landscaping’ of the island, Zakharia’s work becomes an ongoing documentary of mutation, rather than of change. Change is simply a transition from one state into another, while in his work, one sees a rearrangement of the order of space, which affects all aspects of life. But he rarely stops at just this; documenting is only a preliminary research phase of his projects. Next comes the photo-montage. Zakharia’s technique cannot be described as surrealist for what he wants to abbreviate is not history but reality as a whole. The artist’s hands want to interact with every shape of his images, rather than letting them present themselves as standalone opinions. 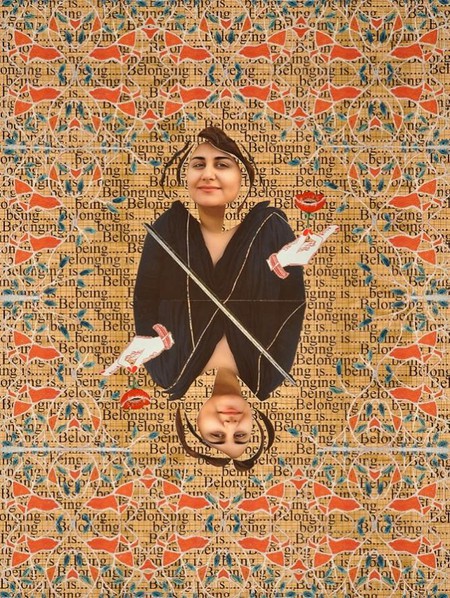 Although his work most often deals with memory (and indeed, as an exile of the Lebanese Civil War, his work as a surveyor of the textures of war and ‘anti-memory’ has been ongoing), or the experience of displacement in the Arab world, his recent series, Belonging, which was showcased during this year’s Art Dubai by Albareh Art Gallery, deals with a rather different subject. The project began in 2010, when a curator invited him to take part in a project about the concept of belonging, which captured his imagination. The artist then began photographing dozens of residents of Bahrain, asking each of them to define the concept in their own words. What, then, defines belonging, and why is it even necessary to belong?

According to one of the artist’s subjects, belonging is something intangible yet very real – a thought which also sums up a great deal of Zakharia’s work. The photographs of these men and women coming from almost a dozen countries – including Bahrain, which many of his subjects have already left, further emphasising the state of constant change witnessed in Manama – are set against backgrounds of murals photographed on the island throughout the years, as well as remarks on belonging by each of the participants.

When I saw these works in Manama – which were mostly finished, except for a few – I began to question what it means to be a foreigner in a country so young and so old at the same time, and subsequently, what it means to be a Bahraini. Where is the intersection? The boundary seems both thick and thin. Walking through the streets of Adliya reveals some of the difficulties: a dozen languages flirt with the heavy air, melting into a gigantic cloud of experiences and borderline situations that appear on a map simply as ‘Bahrain’.

In his book, In the Name of Identity, the Lebanese writer Amin Maalouf noted how ‘It might well be that an accident, happy or unfortunate, or even a chance encounter, weigh more in our feeling of identity than a thousand-year heritage’. The necessity to define one’s entire being through the prism of identity alone – particularly for the purpose of self-defense in both an individual and group context – is for Maalouf a catalyst for violence that has led to much bloodshed in the Middle East. When he adds that ‘identity is not given to us at once, but rather … is being constantly construed and transformed in the course of our existence’, one witnesses a confluence of Maalouf’s proposal with Zakharia’s visual environs.

It is but the trend lines and traces of Perec’s ‘process’ one sees at work in Belonging, in terms of the production of identity in a place such as Bahrain – one of those laboratories of modernity, with fragile textures often endangered by the pursuit of identity, on the meeting grounds of the Islamic, South Asian, and Arab worlds. And, if this is the case, how is it then possible to call Bahrain ‘home’, or at least belong there? Zakharia well knows these questions, and speaks about them without any sign of melancholy. He is well aware that such questions cannot be answered; his images are rich with traces of impossibilities: home, the sacred space, the destination in life, the miracle of friendship, and the secret of memory. 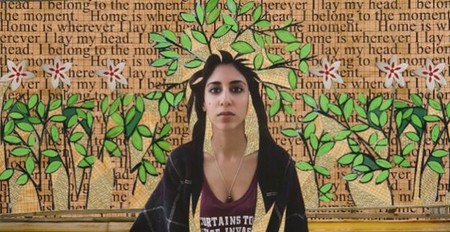 Belonging? Home? I don’t know. Hours after my arrival, a friend from Bahrain living in New York wrote to me, saying ‘welcome home’. I felt both puzzled and embarrassed. This isn’t my country, I whispered to myself. But what does it mean to have a country? Can the official documents attesting your name, place of birth, and residency sum up not only your actual belonging, but also the entirety of your belongings? The question remains. Perhaps the lesson of contemporary art – if there is one – would be that letting go of the stability of our notions of identity, shaped by something as unstable as geography, could relieve many of our anxieties and prevent so much violence.

Speaking about art over lunch one day, a Bahraini gallerist turned to me and said, ‘You understand [things] in the exact same way [that] I do. I thought I was alone!’ And at that moment, I was home in Bahrain, even though the meeting was the result of chance, curiosity, and luck. The moment passed, and the geography and art changed, but home remained. If you look beyond maps, there are still places to be conquered, and I think this is perhaps what Camille Zakharia’s art attempts to capture. In a world of exiles, the many homes we find are cleverly stored in our memory, always available.

A few days after meeting Camille, I left Bahrain en route to Doha, not knowing when or if I would ever see the island again. They say there’s no exile for those who were never home; but now I had been home, if only while chatting about art one long afternoon in Manama. I realised that for the first time in many years, I was now an exile. It was a clear day, and from the airplane I could make out places that had given me shelter, places I loved, places where I loved. I could distinguish those sites from all the others. I was full of questions and hesitations, and wondered what I would have said had Camille asked me about belonging in Bahrain. It is a place impossible to describe while you’re actually there. A stanza by the Bahraini poet Qassim Haddad came to mind: ‘We’re not an island. Except to whoever sees us from the sea’.