Encounters, an exhibition by Syrian-American photographer Sueraya Shaheen at Bahrain’s La Fontaine Art Centre, features documentary-style portraits of some of the leading lights of the region’s art world.

Shaheen’s fascination with visual artists began as a child growing up in Beirut when she lived in an apartment on the city’s famous Hamra Street, a magnet for intellectuals in the 1960s. She remembers her parents hosting salons attended by artists and writers, ‘who would talk and listen to music and poetry, smoking cigarettes on the large balcony into the night’, and her nostalgia for that bohemian world remained.

While completing her Bachelor of Fine Arts in Washington D.C., Shaheen’s interest in artists and their process led her to photograph fellow student artists in their studios and by the time she graduated, she knew this would be her focus. Finally, after doing portraits for a book on Texan artists, she decided that what she really wanted to do was return to her roots and photograph the visionary talents contributing to the Middle East’s thriving art scene – a project that has seen her travel throughout the region and beyond over the past four years, continually building her archive.

‘You generally see art in white-walled galleries or catalogues and changing hands in the market place,’ says Shaheen, ‘but there are real people involved and I wanted to show art’s humanness by photographing artists in their own environments, which so often reflect who they are.’

Her work has featured in The Economist, The Washington Post, Vanity Fair, Harpers Bazaar, Hello and The Herald Tribune, as well as several books. Among these is the 2015 release Summer, Autumn, Winter… and Spring: Conversations with Artists from the Arab World by Sam Bardaouil and Tim Fellrath. They say of Shaheen’s portraits, ‘[They] truly capture the artist’s personality, and are reflective of their artistic practice. As such, they are more than simple documents, but are artworks in their own right.’

Shaheen’s beautiful, intimate portraits instil in the viewer a sense of genuine encounter, while collectively they offer a valuable snapshot of the Middle East’s artistic landscape, which in the future will represent a type of time capsule of the region’s art scene now.

‘Encounters’ debuted at the Barbara Davis Gallery in Houston, Texas, as part of FotoFest 2014 and is appearing for the first time in the Middle East at La Fontaine Art Center in Bahrain. Meet eight of the 29 artists featured below. For the full picture, visit La Fontaine before June 30th 2015. 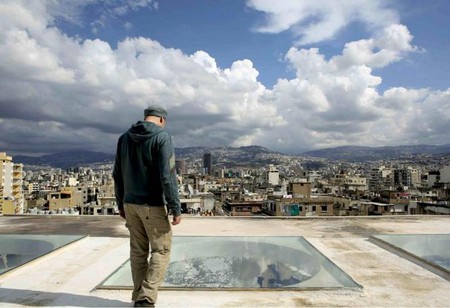 Born in 1975. Lives and works in Beirut, Lebanon

Born in 1975, the year that Civil war broke out in Lebanon, Baalbaki’s life was marked by conflict right from the start and his work reflects this in devastated urban landscapes and portraits of masked soldiers and refugees displaced and dehumanized by the ongoing conflict in the Middle East. Now internationally recognized for his poignant large-scale expressionist paintings, Baalbaki has had sell-out exhibitions worldwide and his work fetches increasingly high prices at auction, usually far exceeding estimates. He is also in a number of important collections, including the Tate Modern in London, and participated in the 2011 Venice Biennale. Shaheen shot Baalbaki on the roof of his studio in Beirut, with the city and subject of much of his work fittingly spread out below him. 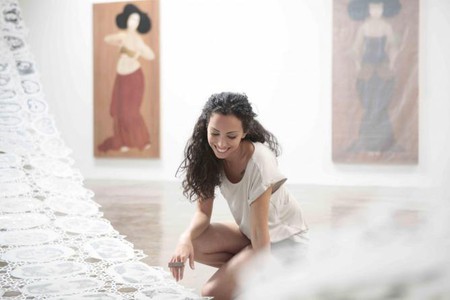 Born in Iraq, 1981. Lives and works in San Francisco, USA

On first glance, one appreciates Kahraman’s paintings for their beauty alone: large-scale depictions of willowy women, combining elements of Italian Renaissance paintings, classical Japanese prints and Persian miniatures. But look closer and violent and ugly themes reveal themselves: female oppression, honor killings and war. This combination of beauty and depth has made a rising star of the Iraqi artist, whose work is in Doha’s Mathaf Arab Museum of Modern Art, and the Rubell and Saatchi collections. Shaheen captured Kahraman setting up her exhibition Extimacy at Dubai’s Third Line Gallery in a portrait that’s reflective of one of her artworks: the serene artist in center stage surrounded by paintings of women, who on closer inspection are slicing sections out of their bodies, while a lacy rawhide installation suspended from the ceiling is modeled on cross-sectional scans of the artist’s body. 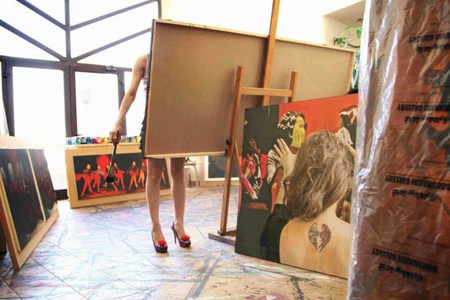 Kuwaiti mixed-media artist and poet Shurooq Amin, photographed by Shaheen in her studio in Kuwait

Born in 1967. Lives and works in Kuwait City, Kuwait

Having completed a PHD in Ekphrasis (the connection between art and poetry), Amin paints with the brush and the pen and has been widely published and exhibited. In both realms, her purpose is to incite change, which translates on the canvas as large, colourful acrylic paintings that question everything from corruption to censorship and hypocrisy in Middle Eastern societies with a light, playful touch. The controversial nature of her work has seen her trending on Twitter and earned her an interview by the BBC’s Steven Sackur on HARDtalk. She is also the first Kuwaiti woman to sell at Christie’s, and has been selected for the Pan-Arab Pavilion at the Venice Biennale 2015. Shaheen shot Amin in her Kuwait City studio ‘in a cheeky pose reflective of her personality’ with her face obscured as it is in a number of her artworks (by veils, masks and flowers). 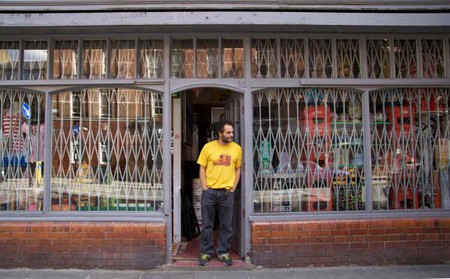 Known as ‘the Andy Warhol of Marrakech’, Hajaj is a multifaceted pop artist, who combines East and West, modern and traditional elements in explosively colorful contemporary artworks encompassing installation, fashion, furniture design and most famously vibrant portraits framed with Arabic logos for household brands. He has exhibited widely internationally and is in a number of collections, including London’s Victoria & Albert and British museums, the Los Angeles Museum of Contemporary Art and Dubai’s Farjam Collection. Shaheen: ‘I spent the day with Hassan photographing at his studio and as I was leaving I turned back to wave goodbye and photographed him in the doorway. Later, in the edit, I picked this one as he looks like he’s in one of his artworks, framed with Arabic Coca Cola crates visible through the window.’ 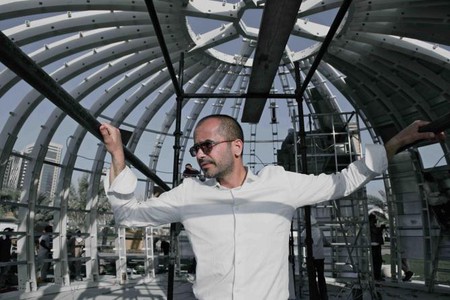 Iraqi conceptual and performance artist Wafaa Bilal, photographed while setting up an installation in Sharjah, Courtesy of Sueraya Shaheen

In one of his best known works, Domestic Tension, Bilal spent a month in a Chicago gallery with a paintball gun that people could shoot at him over the Internet – a form of protest against the Gulf War that the Chicago Tribune described as ‘one of the sharpest works of political art to be seen in a long time’. This is typical of the performative, interactive work that has earned Bilal worldwide recognition, much of it informed by his experience of suffering repression under Saddam Hussein. Another prime example is 3rdi, a comment on surveillance that saw him having a camera surgically implanted on the back of his head, which transmitted images to the web 24 hours a day as well as to Qatar’s Mathaf Museum of Arab Art. Here, Shaheen catches him mid-construction of a huge camera obscura commission being built in Sharjah. 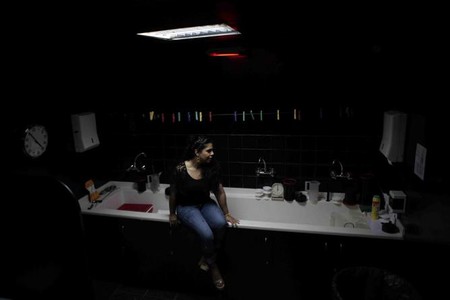 Born in Saudi Arabia, 1973. Lives and works in Dubai, UAE

Al-Dowayan has earned critical acclaim for striking conceptual black-and-white photography and installations that document Saudi society, in particular critiquing the situation of women. In an image entitled The Choice VI, for example, a henna-patterned hand slips a piece of paper into a ballot box, commenting on women’s exemption from voting, while her installation Suspended Together is a comment on the restrictions on women’s freedom to travel, consisting of 200 doves frozen in flight, each with a travel-permission document signed by a male guardian attached, which Al-Dowayan acquired from Saudi businesswomen, scientists and educators. She is in the collections of London’s Victoria & Albert and British museums, the Mathaf Arab Museum of Modern Art in Doha and the LA County Museum. Shaheen captured the artist in Taksheel art center’s dark room, evidencing the original processes that the artist still uses. 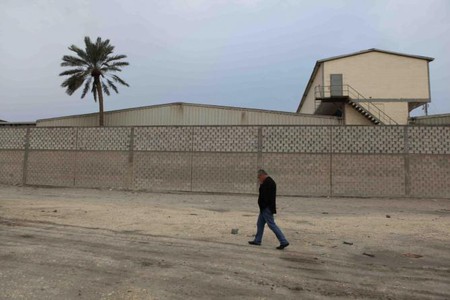 Bahrain-based Lebanese artist Camille Zakharia, in one of the areas that inspires him in Bahrain Courtesy of Sueraya Shaheen

Zakharia’s artistic technique and themes were born of the nomadic existence thrust upon him by Lebanon’s civil war, which took him to Turkey, Greece, the USA and Canada, before settling in Bahrain. Through photomontage, collage, painting and print, he reconstructs and reveals his encounters with people and places, exploring, he says, ‘concepts of home, identity and belonging in the context of a globalized condition’. The result is artworks that tell multilayered stories and resemble colorful Middle Eastern tiles or carpets. He has exhibited in North America and the Middle East and participated in Bahrain’s Pavilion at the 2012 Venice Architecture Biennale (which won the Lion D’Or) and the 2013 Venice Art Biennale. He was also shortlisted for the Victoria & Albert’s Jameel prize and is now in the museum’s permanent collection. Shaheen accompanied Zakharia to areas that he has photographed in Bahrain, capturing him with a palm, which is a common, symbolic feature in his collages. 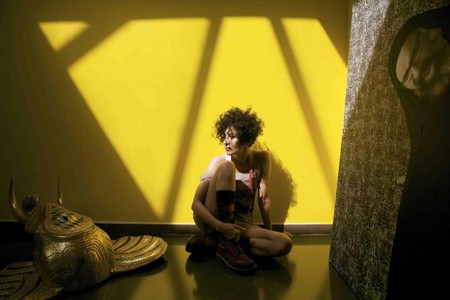 The streets of Tehran are just another exhibition space for this multidisciplinary artist whose work includes a collection of terracotta dogs that she modelled on dead dogs found on highways then distributed around the city. This echoes her controversial contribution to Tehran’s 6th Biennial of Contemporary Ceramic Art of 2,000 ceramic cockroaches, which is just another effort by Fayyazi to challenge some of the, to her mind, staid, traditional artistic practices in Iran. Apart from shaking up the art scene at home, the installation and performance artist has exhibited internationally at Paris’s Espace Louis Vuitton, Berlin’s Pergamom Museum, the Museum of Modern Art in Freiburg and the 51st Venice Biennale. Fayyazi often visits Dubai, where she has a gallery, and a chance meeting with Shaheen at the studio of the Haerenzadeh brothers (fellow Iranian artists based in Dubai) produced this portrait in the sunlight streaming into the space.