Displacement: An Artistic Exploration Of Space In Modern Bahrain 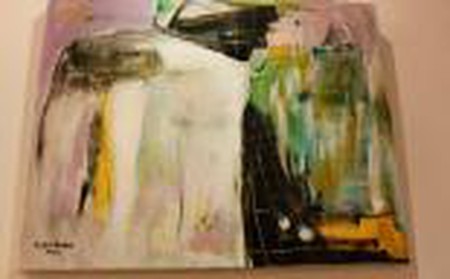 Arie Amaya-Akkermans takes a look at five artists who explore the subject of ‘space’ and ‘place’ in the group exhibition Displacement, shown at the Albareh Art Gallery in Bahrain in early 2013. 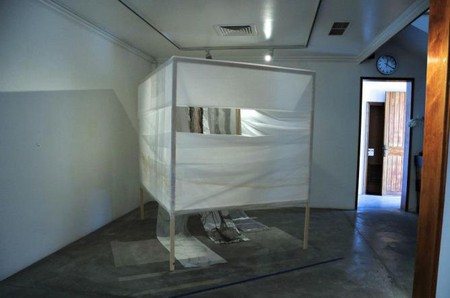 The obsession with temporality that has shaped most of contemporary art – and the entire visual culture of Modernity slash Contemporaneity – seems to have come to a terminal point in which the nature of time is no longer associated with the great metaphors of the modern era: Travelling, hyper-spaces, absence of boundaries. The emphasis has shifted from the temporal – and therefore from the purely historical: wars, processes, actualizations – into the nature of finished things, objects and the whatness of everyday life. Space has acquired notoriety because of how estranged it has become from the notion of ‘place’, and though this was common knowledge to the cultural sciences for over a hundred years, it has begun to appear as a problem in art only very tardily. Occupying a space is something correlative to a moment in time, therefore space appears only momentarily within an aggregate of experiences that lacks in specificity but exceeds in emotional content.

The rebirth of space – and the artistic inquiry into the nature of places – is not necessarily new and appears in European theoreticians such as Henri Lefebvre, against the philosophies of time on which Modernity fed. Were these theories anti-Modern? Perhaps not, but certainly reactionary, and attempted to retrieve some of the sacral qualities associated with ‘place’, as a point of origin or departure. Architecturally speaking, hyper-spaces challenged the distinction between place and space, creating living environments that lack the permanence of a ‘home’, and then transported them to the post-colonial world without the necessary cultural transitions. Sociologist Zygmunt Bauman speaks often about the ‘solidification’ of the modern project after the flexible ‘liquid’ state of development and progress, which appears to do what solids are meant to do: To cancel time. The denizens of the time-world have become displaced from the intensity of the journey.

To put the journey of time to a halt essentially means to reconsider the notion of travel and movement at all, against the temporality – which here means lack of permanence – that has been imbued in space. Displacement seems to be not only a sociological term for urban migration, war demography and economic struggles, but also a part of the internal vocabulary of what it means to be contemporary. Contemporary against what? That would be the first question. In the absence of referents, points of departure and grand narratives with strong glue to define imagined communities, displacement becomes the fundamental experience of belonging in society: Are you displaced too? To be dis-placed means to question the instability of being against the background of the intoxication caused by time-travel. A curious project in Bahrain invited a number of young promising artists to take their stand on what it means to be displaced and its impact on the surrounding. 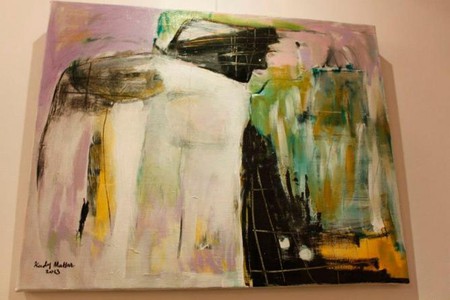 Bahrain was the perfect setting for such a project: A multi-cultural and multi-ethnic society on an island in the shores of one of the most geo-politically complex regions in the world, a young developing state with a post-colonial heritage and at the same time the cradle of ancient civilizations, migrations, trade routes and even mythical origins. The ABCAD Art Center, of the Albareh Art Gallery, served as the platform of a 3-months long mentorship at the heart of which, there was not only an inspiring process of technical improvement but also the direct confrontation with displacement and personal and social identity in a place as formless and in constant flux – laboratory of modernity and guardian of tradition at the same time – as Bahrain. The vision of ABCAD’s director, Hayfa Al-Jishi, was combined with the hands-on skills of curator Mo Reda and Bahraini musicologist Hasan Hujairi, blending into an aesthetic experiment aiming to map more accurately what art from the Gulf region should reflect.

Hujairi’s work is indicative of this trend: As a musicologist working on impalpable and uncollectable materials – sounds and installations – he begins to question art from the contemporary perspective of ephemerality and the appearance of traces that has characterized contemporary art since the 1980’s but that failed to arrive on the shores of the Gulf – with the sole exception of Emirati conceptual artist Hassan Sharif and to some extent the work of Bahraini artist Anas Al Shaikh – which is still largely concerned with traditional painting, in which today it would be safe to include abstract, under the aegis of art patronage and the gallery format. Preludes, the series of artistic interventions preliminary to Displacement, aimed for free expression in conceptual formats and an interesting performance exercise in which Hujairi asked participants to draw at the sound of experimental music.

Curator Mo Reda worked closely with the participants – over a dozen of them – in developing visual vocabularies embedded in contemporary contexts in order to implement meticulously research-based pieces as a part of the exhibition. Although there might have been a great divergence between the set of skills, conceptual development and ultimately, performance of the participants, there were some particularly remarkable works in the exhibition, by young artists that had been previously exhibited by the gallery.

Jehan Saleh’s Insomnia (installation, ink and charcoal on paper) was a very clean – and in that sense transparent – attempt at dislocating familiarity and stability: A bed is often a metaphor for comfort and security, highlighting the smooth transitions between comfort and discomfort, security and anxiety, pleasure and pain. In Saleh’s work – not unlike her earlier transformation of photographs taken while traveling into anonymous shadows – sense and contradiction, flow and halt, sleep and restlessness, place and un-place, unfold simultaneously into a dream-like world that yet carries traces of personal realities and experiences as impossibilities. The enclosed and yet visible room-like installation offers calm and discomfort at the same time, blurring the critical distance between private life and public observation. The deconstruction of the familiar space is yet not complete and leaves an empty in-between to be completed by the experiences of the viewer. 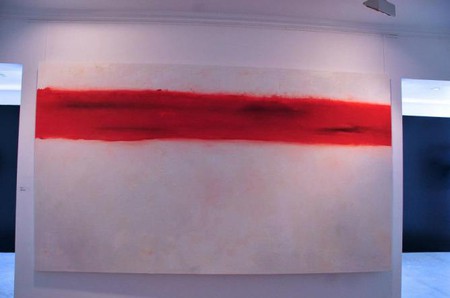 In a more traditional format, Zuhair Al Saeed’s Redline (oil on canvas) creates a fully continuous but yet abstract ‘boundary’ between the inner world and the possibilities of representation, in a minimal painting that explores the shift between liquid and solid that defines contemporaneity as such: Freedom of movement, freedom of intellect, freedom of representation, are all external constraints that possess the individual rather than liberate him. A certain demand for a pictorial language available to any audience regardless of cultural bias, is achieved in this work with almost whimsical simplicity. Unlike Saleh’s work, Al Saeed’s transitions are nowhere smooth and the construction of identity is questioned throughout: Why are we hiding behind walls? Why can’t we overcome boundaries? What does it mean to be inside? Is it different from being outside? The white texture is more disquieting than comforting and asserts a boundary more than the lineated boundary itself.

Lastly, Kady Mattar’s paintings, Shove 1 and 2 (mixed media on canvas) while in line with some of her earlier work – she maintains the expressionist use of colour in quarter tones – there’s an unsettling disfiguration of the human figure into thingness, objects and non-descript places. The distance between the eye and representation seems a lot further than possible and in line with Saleh’s work, Mattar’s painting appears as transitions between dreams and realities, between hopes and fears, between questions and doubts. Flat surfaces acquire contours from disordered planes, and re-organize themselves without specific composition. The canvas is a snapshot of a larger idea that is ought to remain unformed for now, and that must be revealed only from oblique planes. Her work, however, is not a locus of anxiety, and she remains safely anchored in a plurality of styles and geometrical lines that might yet gain more from the painting by losing some continuity.

Other highlights of the exhibition were Mohammed Salim’s Identity (a mixed-media installation) and Ali Hussain Mizra’s No (another installation), that while being conceptually outstanding, perhaps would require a more thorough investigation on the materials. Overall, Displacement was a first step in the direction of challenging the technical formats of art in the region into more timely artistic interventions. While most of the works are not exhibition-ready material, many of the artists have shown not just an interest but a range of technical capabilities, and it is still necessary to strengthen concepts in line with contemporary thematic lines and use of the medium.

The concept of the modern is still a challenge for Arab artists that are often unable to stand on the margin between Modernity and Tradition, perhaps not being entirely aware that both concepts (particularly what is called in Arabic “turath”, or heritage) entered the Arab consciousness only in the 19th century and as a product of colonialism. No contemporary art worthy of the name has ever been produced under the aegis of a single ideological continuum and it is for this reason that art is always so fraught with paradoxes, contradictions and suspended judgments. 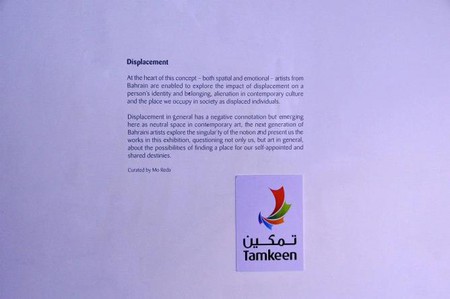 For art in the Gulf region to evolve in the direction of global art while remaining authentic – without the trap of the heritage and the origin, no longer available today – it is necessary to embrace contradiction, to embrace doubt, to incorporate instability and uncertainty in the conceptual and material production. It is only then that art will be tantamount to freedom.