The Role Of Water In Islamic Architecture

Water is not merely a functional addition to architecture and design, it is an integral part of architecture in both religious and secular systems – shaping the aesthetics of landscapes and breathing life into structures. Water has notably been greatly used in Islamic architecture across the Middle East, as far as India to the East and Spain. 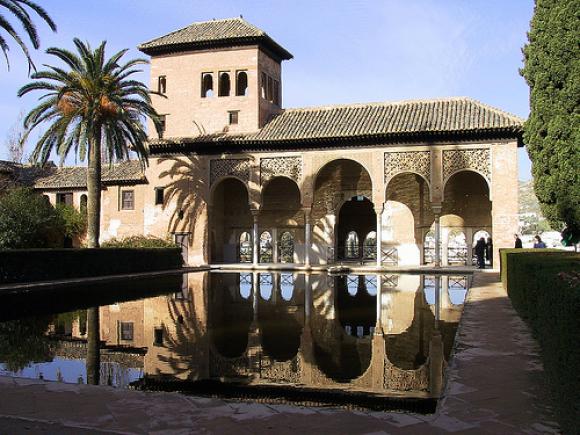 Water doesn’t necessarily play the same role in traditional European architecture as it does in Islamic architecture. The Quran states that “every living thing is made of water,” and the prominence of this thought is visible in Islam’s use of water. The role played by water in Islamic architecture is as symbolic as it is practical. Water is not only used in a purely utilitarian manner: after all, it is the source of life and thus carries an important symbol – not only for Islam, but also for many cultures that associate it with life, purification and sustainability.

Water plays a particularly central role in Iranian design: 1,000 years before the invention of the first water pump, Persian agricultural experts created the qanat based of their hydraulic laws. A water management system, the qanat supplies water and irrigation to arid, isolated lands. It takes the form of a series of deep wells connected by tunnels which carry water over long distances.

Water in Persian gardens has a particularly symbolic meaning, but it also helps to cool the air and nourish the plants that provide shade. Moreover, its serene musicality eclipses any aggressive sound from the nearby city. The Persian garden, representing paradise on earth, is divided into four sections by waterways. In fact, the word ‘paradise’ in English comes from the Old Persian word pairidaēza, which refers to a walled garden. In these halcyon gardens, water is used to create different effects. From an aesthetic perspective, it greatly emphasizes visual axes and reflects the exquisite architecture of surrounding buildings – endlessly multiplying their majestic grandeur. Fountains, which produce dynamic water, differ from static pools and as such fiercely celebrate the effervescence of life.

Water is not only used in gardens but also in ablution fountains, in both a practical and spiritual way: water symbolizes external purification, and it also brings the user into ritual contact with the architecture itself.

It seems easy to contrast Iran – a country that appears so clearly lacking in water supplies – to Turkey, where water is part of the make up of cities. But the reality is that fresh water supplies in Istanbul for instance are very limited and have to be brought along aqueducts built in Roman times. Water’s abundant presence in these arid lands is thus not natural, but it succeeds in creating a paradise on earth by allowing us to listen to the gentle sound of water while watching the moving reflections of trees, flowers, and architectural wonders on its rippling surface.