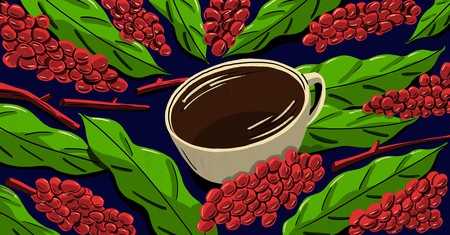 Coffee is very much a global phenomenon and an essential part of people’s everyday lives. Here are ten coffee facts you might not know about your morning brew.

Coffee has been at the centre of our social lives in one form or another since the mid 14th century. Although no one is certain about its exact origins, there are many legends about its discovery, and all of them emphasise how quickly the beverage became an integral part of the cultures it spread into.

The word ‘coffee’ has Arabic origins

The word ‘coffee’ comes from the Arabic word qahwah, which originally referred to a type of wine.

There are a number of theories among linguists about the word’s current association with coffee. Many believe that like wine, caffeine has an intoxicating effect, but qahwah can also be traced to the Arabic word quwwa, which means power/energy, or qaha which translates to ‘lacking hunger’ and could reference coffee as an appetite suppressant. Another theory is that it originates from Kaffa, a kingdom in medieval Ethiopia from where the coffee plant was first exported to Arabia.

Nobody is sure who first discovered coffee

There are a number of different accounts about who first discovered coffee. Some records trace the origin to a goat herder named Kaldi in Kaffa, Ethiopia in the 9th century. Kaldi noticed how active his flock became after munching red beans from a coffee plant, and then tried some himself and felt a lot more active.

Another similar account states that a Moroccan Sufi mystic, Ghothul Akbar Nooruddin Abu al-Hasan al-Shadhili, was once traveling through Ethiopia and observed unusually active birds. When he noticed they were all eating a specific bean, he tried a few himself and and quickly regained vitality.

The general consensus is that the plant was first discovered in Ethiopia in mid AD 800, when people simply chewed the berries. It wasn’t until the 15th century that traders from across the sea – precisely, Yemen – decided to boil the beans and make a drink out of it.

The oldest accounts of coffee-drinking trace back to Yemen

During the 15th century, Sufi monks would drink the beverage to improve concentration, prayers and stay alert through the night in worship.

This is probably where the word qahwa – which then meant wine in Arabic – began to be associated with coffee for inducing what was considered a level of intoxication.

For centuries, coffee was primarily consumed in the Islamic world

For over 100 years, Yemeni farmers grew distinct and flavourful coffee beans and, by the 16th century, the local coffee gained regional momentum and spread through the rest of Arabia, Turkey and Persia. It was usually consumed in religious contexts.

Coffee has always been an important way of socialising

Public coffee houses, usually associated with Sufism, first gained popularity in the 16th century. The first coffee houses opened in Cairo, Egypt, around an important religious university and slowly spread throughout the region.

People would visit these venues to drink coffee, listen to music, play chess and talk about current affairs and religion.

Soon, coffee houses became so essential as sources to share and receive information that they were referred to as ‘Schools of the Wise’.

Coffee was once banned in Mecca

The drink became so popular in the Arab world in its early days for its ‘intoxicating’ effect that it became known as the ‘wine of Arabia’ and was, in fact, banned by religious scholars in Mecca in 1511. The ban was later overturned by the Ottoman ruler of his time in 1524.

It was also banned by the Ethiopian Orthodox Church

Coffee was banned by the church because it was considered a ‘Muslim drink’. Ethiopian attitudes started softening towards coffee drinking in the early 19th century and, over time, the beverage was no longer associated with Islam.

Coffee reached Europe via the island of Malta through Turkish Muslim slaves. It quickly gained popularity among members of Maltese high society and many coffee shops were opened.