Is Music Forbidden During Ramadan? 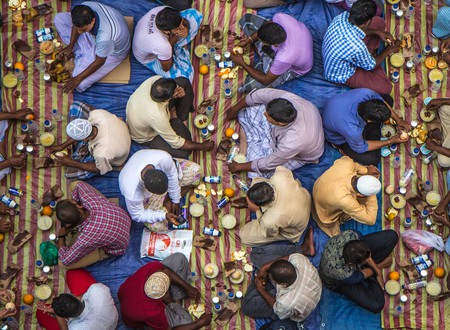 Determining what is and isn’t haram (forbidden) during Ramadan is no simple task. What are the rules regarding dress during the holy month? Is sex permitted? Can you watch TV? Can you listen to or play music?

Examining the latter of these inquiries, there seems to be no definitive answer, judging by the vast amount of online threads centering around the question that have popped up year after year, some going as far as to examine whether music is forbidden at all times within Islam.

Is Music Haram in Islam?

Reading through the Quran, there are no verses that explicitly state music as haram. However, according to Zakir Naik, the controversial medical-doctor-turned-TV-preacher who founded the Islamic Research Foundation and is now considered the “rock star of tele-evangelism,” being immensely popular in India, believes certain parts of the Quran indicate the prohibition of music. He cites chapter 31, verse 6:

“But there are, among men, those who purchase idle tales, without knowledge (or meaning), to mislead (men) from the Path of Allah and throw ridicule (on the Path): for such there will be a Humiliating Penalty.”

Naik states that “idle tales” can be translated to “musical instruments.” Naik then cites Bukhari, volume 7, Book of Drinks, hadith no. 5590:

“… he heard the Prophet saying, ‘From among my followers there will be some people who will consider illegal sexual intercourse, the wearing of silk, the drinking of alcoholic drinks and the use of musical instruments, as lawful.'”

However, as a Hadith (historical accounts of the life of Mohammad) of the Islamic scholar Muhammad al-Bukhari, you enter the territory of man-made text versus the word of God (Quran). Some Muslims consider the Quran to be above all Hadith, and so while the Hadith are meant to help to understand the Quran, it is the Quran’s text that stands as absolute truth.

In 2010, Daily Mail (it should be noted that the Daily Mail is traditionally a right-leaning news outlet) reported that Muslim students were being pulled from music classes at a variety schools in England, despite the classes being a “compulsory part of the national curriculum.” While families stated that playing musical instruments and singing is forbidden by Islam, Open University’s Dr. Diana Harris claimed that most families didn’t truly know why they were withdrawing their children from the classes, and many of them had just learned “it wasn’t acceptable,” and that one of the likely sources of this information was the Imams (the title given to a worship leader at a mosque).

The article also mentions how with Sufism, a branch of Islam that is popular in Pakistan and India, “devotional music and singing is actually central to the religion.” So, just as much as it is a matter of interpretation of the Quran and Hadith collections, music’s role in Islam also appears to be a result of region.

Is Music Haram During Ramadan?

Again, there seems to be no overarching agreement here.

Back in April, Time Out Dubai published “A Beginner’s Guide to Ramadan.” On the topic of music, they write, “People in general must refrain from listening to music loudly during the Holy Month, as it may offend those who are fasting. However, it is acceptable to listen to music on your smartphone or iPod with the aid of headphones.” They also recommend not playing music loudly when driving.

However, in 2005, a Ramadan guide published in BBC states that listening to music, along with other activities like watching TV and playing board games, are banned during the Holy Month.

Even when looking at the adhan (Muslim call to prayer), there is debate whether it classifies as music. While some object to such a notion, for others it’s about separating between the worldliness of music and the otherworldliness of religious practice, and since the adhan is not strictly God’s word, it can be considered music.

Yet, percussive and drum-based “music” is widely considered to be acceptable, and these are often accompanied by Islamic poetry. A good example is the work of Yusuf Islam (formerly Cat Stevens), who has released a number of albums following those guidelines.

Essentially, there’s no real right answer, and you should do whatever you feel is best in the situation. If you think cutting out music is a necessary part of fasting, then don’t engage in musical activities. However, if you think it is acceptable to listen to music during Ramadan, do so, and try to observe others’ beliefs and keep it on the headphones or a low volume.