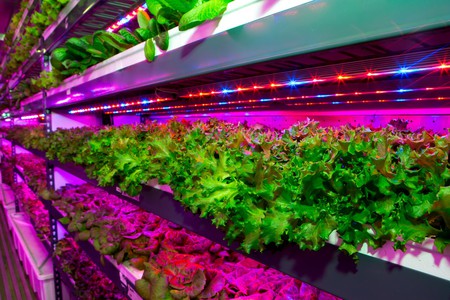 Vertical farming is taking off in the UAE | © Emirates

US-based Crop One Holdings – the vertical farm operator behind FreshBox Farms – has teamed up with Emirates Flight Catering on the world’s largest vertical farm, costing £30 million.

The Dubai-based airline will be the exclusive distributor of the brand’s products, which are known to be much more eco-friendly than traditional farming, which is based on treating soil to grow crops.

A significant 99 percent less water is required for vertical farming. It’s also known as ‘controlled environment agriculture’ or ‘digital distributed agriculture’ and is characterised by growing in stacked shelves or towers that allow plants to be grown in more than one layer above the ground. And as it’s all done indoors, farmers don’t have to rely on the natural seasons, but use artificial light. 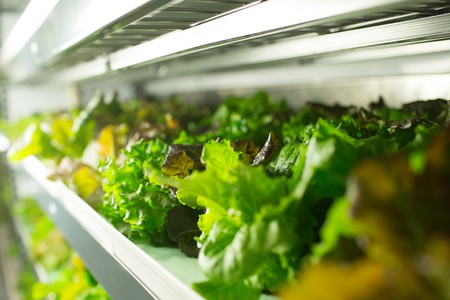 “Greenhouses, which also grow vertically, are generally not considered vertical farming because they do not exert the level of control over the plants’ growing environment that vertical farming does, and because they use sunlight,” Ming Zhu, business analyst at Fresh Box Farms, tells Culture Trip.

When it comes to Dubai Al Maktoum Airport at Dubai World Central, the vertical farm will use a specific combination of LED lighting, nutrient formula, water flow and air temperature in a digitally controlled environment to grow leafy greens for people travelling in the region.

So far, the airline company has shared that its Middle East network will be served the greens, but a spokesperson for Emirates Flight Catering tells Culture Trip that it will eventually go further afield.

“The plan is that we will market and sell the products as widely as possible,” the spokesperson says. “We will be supplying the produce to Emirates airline, along with the other 105 airlines that we cater for out of Dubai. We also plan to expand into the retail and FMCG markets in the MENA [Middle East and North Africa] region.”

In general, it shows potential for solving food issues in the UAE – which imports 98 percent of its greens, because of its desert climate – and to encourage serving more homegrown produce. As a side effect, it will also reduce the environmental footprint of traditional outdoor farming on a huge scale.

It’s something that has been a success for Crop One Holdings for a long time now, with existing locations in Boston, Massachusetts, and three more locations in the US breaking ground in 2018. Unlike their forthcoming Dubai outpost, which will serve travellers, they have 38 different customers in Boston, from retailers to wholesalers. 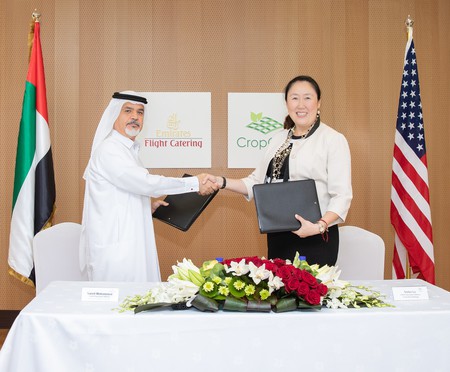 “The success is due to the fact that our farm is at gross profit and has been since December 2016 – this is unique in the industry,” Sonia Lo, chief executive officer of FreshBox Farms, tells Culture Trip. “Boston is successful because it’s a good value market – i.e. lettuce prices are strong (just as they are in Dubai) and it’s a market with a demographic that likes and values healthy eating.”

With water use down to 1 percent of that used in conventional farming in California, Washington and Arizona, the eco-friendly company is likely to build farms in other countries in the future. Lo adds, “We plan to serve a wide variety of customers around the region.”

Just as well, considering many countries in the Middle East lack sufficient rainfall. Using electricity in farming is actually cheaper than using water in the desert city. They manage to do it by recycling water that comes from the harvest in a sanitary way – something that even greenhouses can’t achieve.

“Our growing enclosures started with a standard form factor of a refurbished shipping container. Our water usage in one of those enclosures was 18,000 gallons of water per year,” Zhu explains. “We captured condensation and evaporation and recycled those for the plants’ use. In conventional agriculture, 90 percent of the water sprayed on crops is lost to evaporation. Even with drip irrigation systems, water loss to evaporation is significant.

“In vertical farming, this water is captured and re-used because it is a closed-loop system. To produce the same quantity of vegetables in conventional farming as we do year-round, it would take the equivalent of 46 million gallons of water.” As vertical farming doesn’t do this, it means little to no contamination, and bacterial counts can be as much as 600 times less than field growing. 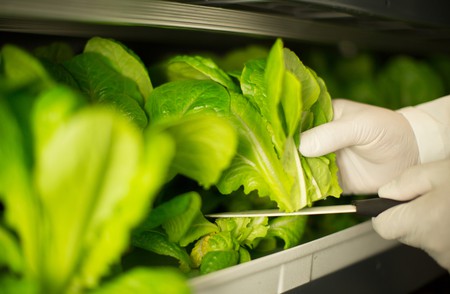 If anything, the health of produce from indoor farming is better than that farmed using other methods. Crop One will ensure the vegetables go from farm to fork in less than 24 hours, and with the clean leaves idea catching on, Crop One plan to go into growing herbs such as mint and basil, and even strawberries, next.

But for now, travellers can look forward to enjoying fresh food with a fraction of the harmful bacteria of field-grown washed produce, higher nutrient values in food due to the phytonutrients not decaying and crunchy bites that are low in nitrates.

“Field-grown produce has the nitrate equivalent of processed meat because of the way it is fertilized,” Zhu warns. At the vertical farm in Dubai, three tons (2,700 kilograms) will be produced per day without the use of any herbicides and pesticides. 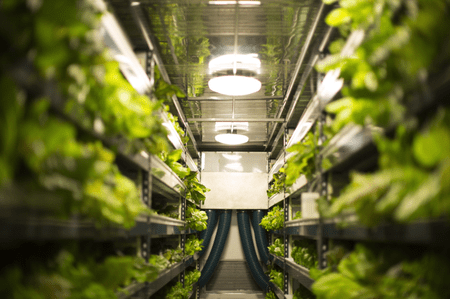 One of the reasons they’ve chosen Emirates to break into the region is they are the world’s largest flight catering operator by volume, serving over 180,000 meals a day. “And because the local retail and wholesale market is very attractive,” Lo adds.

It’s something the company’s competitor in the region, Badia Farm, would agree with. They were the first in the GCC (Gulf Cooperation Council) and serve restaurants and caterers across Dubai with fresh rocket, mustard, cress and kale. Rumour has it Badia is planning to double its operation with a vertical offering in Saudi Arabia.

For the arid lands of the UAE, which has only a six-month window for tradition farming in oasis areas, this is made even more difficult with locust plagues and threats of intense heat.

Vertical farming seems to be the future for the region. Since the announcement of the world’s largest vertical farm coming to Dubai, the UAE has revealed plans to launch 12 additional operations, paving the way for a more self-sufficient country when it comes to fresh produce.