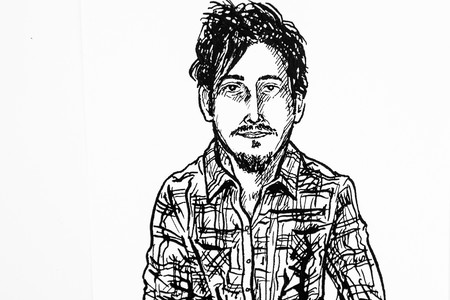 As part of our “20 Literary Translators Under 40” series, we interviewed French and Italian language literary translator André Naffis-Sahely.

Has translated novelists and poets from: North Africa, the Middle East, France, Italy

Recent translations: The Confines of the Shadow by Alessandro Spina; Beyond the Barbed Wire: Selected Poems by Abdellatif Laâbi

Read: “Glory to Those Who Torture Us” by Abdellatif Laâbi

What are you currently translating?
I am working on a graphic novel entitled Une éternité à Tanger (An Eternity in Tangiers), which was jointly produced by the Ivorian author Titi Faustin and Cameroonian illustrator Nyoum Ngangué. An Eternity in Tangiers tells the story of a teenager named Gawa on his journey to emigrate from his hometown, the fictional African capital of Gnasville, to Tangiers, a waypoint on his journey to Europe, where he hopes to escape the economic, political, and social suffering that plagues his home country. My translation will be published in March 2017.

What approach or procedures do you take when translating?
When it comes to the challenges of the actual translation process itself, I’ve never been partial to any of the theory built around translation: much of the process, I find, is intuitive. That said, regardless of whether the authors I’ve translated have been “dead and canonized,” or “living and established,” or even simply “emerging,” I must put myself to the same test: “can I do their texts justice?” I’ve translated twenty-one books, and except for three commissions, I “hand-picked” all my authors on the basis of whether my peculiar idiosyncrasies would complement theirs.

What kinds of works or regions do you gravitate toward?
After translating seven books by Moroccan authors, I would probably have to say that my work gravitates towards North Africa. Nevertheless, every book I’ve worked certainly left an indelible impression. Nobody made me laugh like Balzac’s The Physiology of the Employee, while Zola’s Money made me melancholy and morose. Rashid Boudjedra’s The Barbary Figs dragged me down the rabbit hole of European colonialism in North Africa, while Abdellatif Laâbi (Beyond The Barbed Wire: Selected Poems) lifted me out of it. I learned a great deal from all the others too, but Alessandro Spina was perhaps the author I most wanted to meet, but he died the same week I signed a contract to translate him, meaning I’m probably most proud of The Confines of the Shadow, a multi-generational epic set in Libya from 1911 to the discovery of oil in the 1960s. It is a cycle comprising six novels, a novella and four collections of stories. Volume 1 of my translation was published in 2015, with Volume 2 to follow in late 2017.

Who or what are some untranslated writers or works that you would like to see in English? Why?
I have nursed a life-long passion for the work of the Saudi novelist Abd al-Rahman Munif (1933–2004), whose Cities of Salt quintet of novels charts how the life of a village was turned on its head by the discovery of oil in the 1920s, and the revolutionary changes that ensued in the Gulf as a result of that discovery. While Cities of Salt was ably translated by Peter Theroux, it would be wonderful to see someone take up the task of translating Munif’s trilogy of historical novels Ard as-sawad/The Dark Land, which revolves around the life of the last Mamluk ruler of Iraq, Dawud Pasha. Munif’s work is banned in Saudi Arabia and the United Arab Emirates, where he nevertheless remains very popular.