12 Things You Didn't Know About Islam 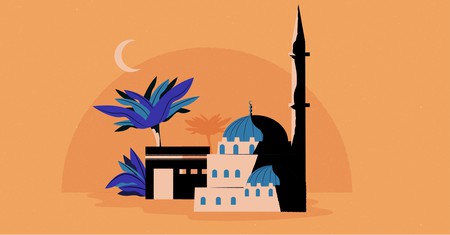 It’s an oft-spoken about topic, but how much do you actually know about this religion of 1.6 billion followers? Well, if you’re Muslim, probably a fair amount. But if you’re not, here’s a (fairly) concise round-up of a few things you may not have known.

There are five main pillars of Islam

OK, maybe you did know this one, but let’s recap. The first pillar is the shahadah, a testimony of faith: “there is no god but Allah, and Muhammad is the Messenger of Allah”. The second is salah, five daily prayers performed as an act of worship to God. Zakah is the third, requiring a certain amount of charity as a religious obligation on an annual basis. The term zakah literally translates to ‘purification’ in Arabic. The fourth is sawm, fasting for the duration of the month of Ramadan (the ninth month in the Islamic lunar calendar). The final pillar is Hajj, a pilgrimage to Mecca for all Muslims who are able to do so once in their lifetime.

Allah is God, and has no gender

Allah is the Arabic word for God. In Arabic, the pronoun used to refer to Allah doesn’t imply any gender. In English, however, God is referred to using ‘He’.

Fasting during the holy month doesn’t just mean refraining from food and drink. During Ramadan, Muslims are encouraged to abstain from backbiting, using bad or crude language, lying and cheating, and partaking in arguments and violence. The Prophet Muhammad (SAW) is believed to have said: “Whoever does not give up forged speech and evil actions, Allah is not in need of his leaving his food and drink (i.e. Allah will not accept his fasting.).”

Note that not everyone may or is required to fast, including children, the sick, the elderly, people who are travelling, and women who are menstruating, pregnant or nursing. Those who can’t fast for any period during Ramadan, but would ordinarily be able to, often make up their fasts at another time, or in some instances can pay a daily charity instead.

Charity is a big deal, for real

There are two main forms of charity in Islam: zakah, an obligatory charity, and sadaqah, a recommended charity. Muslims are encouraged to give sadaqah discreetly, such that one’s “left hand does not know what the right hand has given” (attributed to Prophet Muhammad (SAW)), but can give zakah more openly if other Muslims may then feel more compelled to follow suit. It’s all about intentions.

The rules concerning zakah provide that 2.5% of one’s income and net assets should be given directly to charity on a yearly basis, if one meets the threshold. Ramadan sees record levels of additional donations. It’s estimated that Muslims across the UK donate approximately £100 million every year over this one-month period, and the government even provides an annual guide on how to give safely.

Muslims have an established way of greeting each other

It is recommended to greet someone with the phrase as-salaamu alaikum, which means ‘peace be upon you’. As a Muslim, if you are greeted in this way, it is then obligatory to return the greeting by saying wa alaikum as-salaam, which translates as ‘and unto you peace’.

In Islam, God has at least 99 names denoting different attributes

Here’s a small selection: Ar-Rahman, the Most Merciful; Ar-Raheem, the Most Kind; As-Salaam, the Source of Peace; Al-Ghaffar, the All-Forgiving; Al-Aleem, the All-Knowing; Al-Wadood, the All-Loving; and Al-Hadiy, the Guide.

All Muslims need to know some Arabic

Believed to be the word of God, the Quran came to Prophet Muhammad (SAW) in Arabic. The overwhelming majority of Muslims (about 80%), however, live outside the Arab world. All Muslims are expected to know important terms, phrases and invocations in Arabic and all obligatory prayers (salah) must be performed in the language, too.

Jesus (Isa in Arabic) is a significant and admired figure in Islam and referred to in over 90 verses of the Quran. Muslims believe him to be a highly important prophet, a messenger of God, who performed miracles. There are some differences in how Christians and Muslims view the story of Jesus. Notably, Muslims are strictly monotheistic, so do not believe Jesus was God incarnate or the son of God and rather that he was simply born without a father. A passage from the Quran reads: “Verily, the likeness of Isa (Jesus) before Allah is the likeness of Adam. He created him from dust, then (He) said to him: ‘Be!’ – and he was.” (Quran 3:59)

Like Christians, Muslims consider Jesus to be the messiah. However, they believe that when he returns to Earth at the end of time, he’ll disavow the claim that he is synonymous with God.

Sometimes you’ll see the abbreviation SAW directly after a written reference to Prophet Muhammad. SAW stands for salla Allahu alayhi wasalaam, which means ‘may the blessings and peace of Allah be upon him’.

You’ll also sometimes see PBUH after a reference to Prophet Muhammad, which stands for ‘peace be upon him’.

Muslims believe that everyone is born in a state of fitrah, which loosely translates to a ‘natural’ or ‘primordial’ state, and is the idea that humans are born with a predisposition to believe in God. With this in mind, it is said that converts to Islam are actually reverting back to their natural state.

Not everyone uses or agrees with the designation, but it’s commonly employed to describe anyone who wasn’t born into or brought up in a Muslim family but chose Islam as their religion.

Both halal and kosher foods are permissible to eat

In Islam, it’s prohibited to consume alcohol, pork, carrion and blood, the meat of carnivorous animals, and any animal product which wasn’t obtained or prepared in accordance with Islamic laws. Dhabihah is the Arabic term which pertains to the permitted methods of animal slaughter. By default, most food items are halal, meaning that unless something is explicitly stated within the Quran or teachings of Prophet Muhammad (SAW) to be prohibited for consumption, it can be eaten or drunk. However, if someone is in desperate need of food, they’re permitted to eat what’s ordinarily prohibited.

Generally, Muslims may eat all kosher foods (except those containing alcohol) including animal products because they’re obtained and prepared in the same way as prescribed by dhabihah.

Marriages are contracts rather than sacraments

In Islam, a marriage, known as a nikah, is a binding contract which both parties must consent to out of their own free will. Unlike in Catholicism, marriage isn’t a sacrament as it’s revocable, but it is of course intended to be a permanent commitment. Islamic law, derived from the Quran, governs the principles and terms of marriage for Muslims.

“And among His signs is this, that He created for you mates from among yourselves, that you may dwell in peace and tranquility with them, and He has put love and mercy between your (hearts): verily in that are signs for those who reflect.” (Quran 30:21)

In the event of issues in a marriage, Islam encourages both parties to seek reconciliation, but if they cannot, divorce is permitted as a last resort.

In the UK, a nikah on its own is not recognised as a legal marriage and couples are required to have a civil ceremony as well.