War brings out the worst in people. But when it comes to art, conflicts have inspired some of history’s most powerful works. 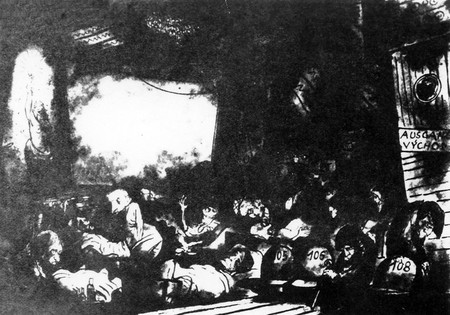 An Infirmary in the Cinema Hall in the Terezin Ghetto

Not all of the Nazis’ concentration camps existed solely for the torture and murder of the captives living there. At Theresienstadt, or Terezín, a concentration camp and ghetto about an hour north of Prague, the Nazis created a false happy picture of life for the Jews there so that they could prove to external organizations, like the Red Cross, that they were not infringing on human rights. Everything about that situation, of course, was horrible; it did, however, allow a cultural scene to exist at Terezín. Thanks to that, the world has this evocative sketch and hundreds of others.

In the years before the outbreak of World War I, which would eventually engulf all of Europe, there were the Balkan Wars, a series of conflicts between the Ottoman Empire and a number of Balkan nations. Franz Marc, a German Expressionist painter who would eventually die fighting in WWI, painted the Balkan Wars in beautiful allegorical form as The Wolves. The painting, which he finished in 1913, becomes all the more powerful when you take into account what would come so soon afterwards. 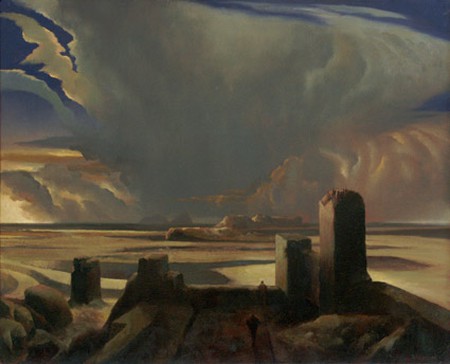 Between 1975 and 1999, the tiny country of East Timor fought for its independence from Indonesia, which had invaded it. Once peace had been declared, the UN decided to keep a number of peacekeepers there in order to ensure that war did not break out again. With the peacekeepers came Rick Amor, an Australian artist who was tasked with documenting the conflict in art. In 2004, he produced Old Seas, which depicts a huge cloud approaching an island and, given its historical surroundings, can be interpreted many ways. 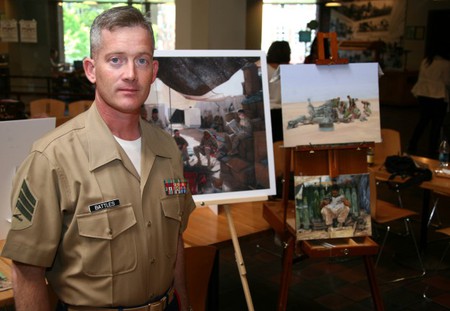 Kristopher Battles with some of his work | © Cpl. Alicia R. Giron/WikimediaCommons

The Work of Kristopher Battles

In wars past, the United States Marine Corps always employed a combat artist. This practice has been dying out lately, though, and in 2012, Kristopher Battles, who served in Iraq and Afghanistan, was the last official war artist standing. His paintings give astoundingly detailed and personal looks into one of the longest-lasting conflicts of our time. In contrast to the images people see in newspapers and on TV, Battles’ paintings show another side of war that people may not have been able to imagine. 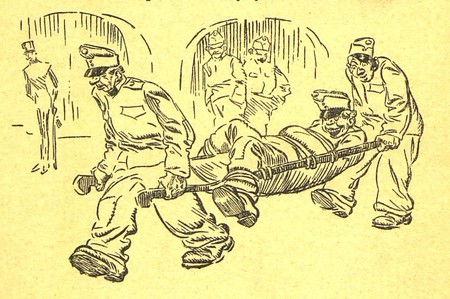 Illustrations from The Good Soldier Švejk

After serving in WWI under the banner of the ultimately defeated Austro-Hungarian Empire, Czech author Jaroslav Hašek poured his collective memories into The Good Soldier Švejk, his satirical magnum opus. Like a Catch-22 for the First World War, the book follows the buffoonish Švejk as he gets himself into and out of countless struggles. The illustrations throughout the book, done by Czech author Josef Lada, show war scenes in a satirical light that is both funny and searing. 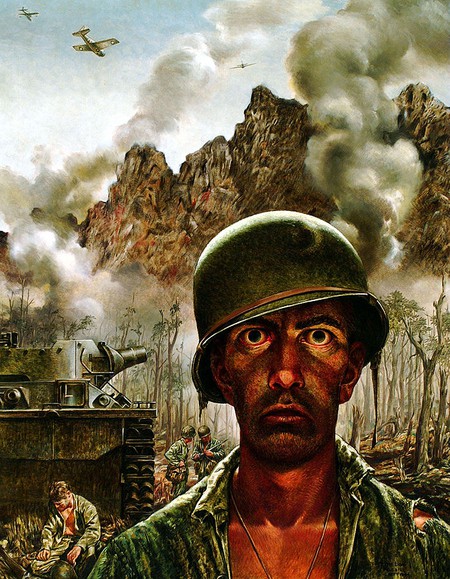 At fist glance, Thomas Lea’s The 2000 Yard Stare looks almost comical, with the cartoonish figure of the soldier looking out into the distance. The thousand-yard stare, though, as soldiers call it, is the look that they get into their eyes when the fighting has simply gone on too long for any emotion to remain. Without having experienced war, civilians cannot have experienced the darkness contained in that soldier’s eyes – but this painting gives viewers a glimpse. 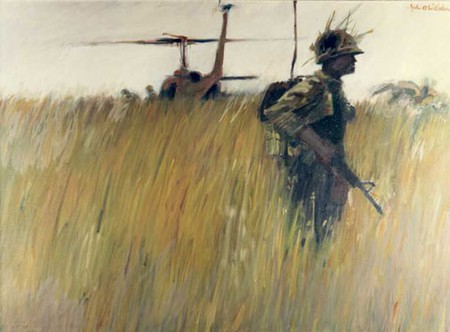 Perhaps no war has been more maligned, no set of veterans more abandoned, than the Vietnam War and the men who fought there. Leaving aside all discussions of whether the war should have happened and whether the troops should have been there, there is no debate that their experiences there were terribly scarring. This painting shows the early moments of one soldier’s experience – even from afar, you can see the trepidation in his face and the way he holds his gun. 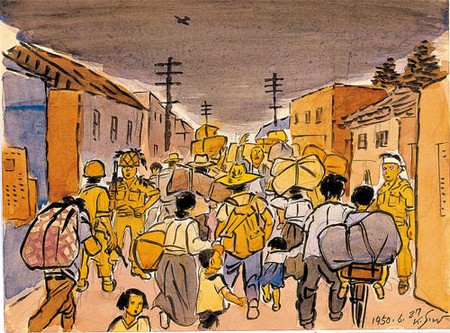 Near the Donam Bridge | © Kim Seong-hwan/WikimediaCommons

While the Korean War was raging around him, comic strip artist Kim Seong-hwan turned to his pen and paper and recorded what was going on around him in the form of sketches and small paintings. His sketch Near Donam Bridge shows a group of refugees trying to get out of Seoul as North Korean troops got closer. All of the people crowded into the frame make it very easy to imagine the sense of hurry and anguish that the people must have felt while being forced to leave their homes. 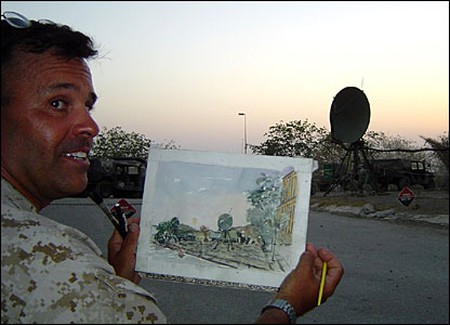 The work of Michael D. Fay

Another former war artist for the United States Marine Corps, Michael D. Fay was present for several American campaigns in Iraq and Afghanistan. Like Kristopher Battles, his work shows another side of the war. Once he got home, though, Fay did not stop his efforts. He turned his attention to the plight of wounded veterans and produced a series of artworks about three young men who had been badly hurt while serving in Afghanistan. This was only the beginning of his work aimed at brining attention to veterans wounded in war.

There is perhaps no more famous piece of war artwork than Picasso’s Guernica, which he painted in 1937 in response to the bombing of a small Basque town called Guernica at the order of the Spanish Nationalists. Once he had finished it, it traveled to many places around the world, giving people everywhere a powerful look into the horrors of the Spanish Civil War. The painting, typical of the cubist style that Picasso developed, is rife with symbolism and big enough to capture your attention for a very long time. 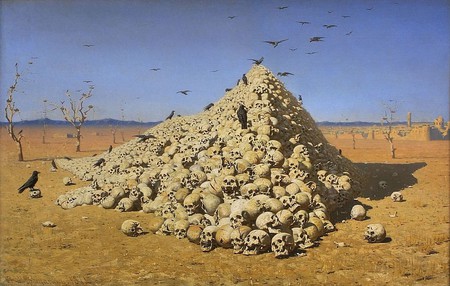 The Apotheosis of War | © Vasily Vereshchagin/WikimediaCommons

The Apotheosis of War

There is no better way to see the progress of Russian troops through Central Asia than to look at Vasily Vereshchagin’s works. Not all of them were very well accepted, however, because they did not always portray the army and the tracks that it left behind in a good light. The Apotheosis of War, with its pile of bleached and damaged skulls left only to the crows, is one such unacceptable piece because of how far it was from celebratory. In an age when painting war was all about celebrating victory, it’s still an important piece. 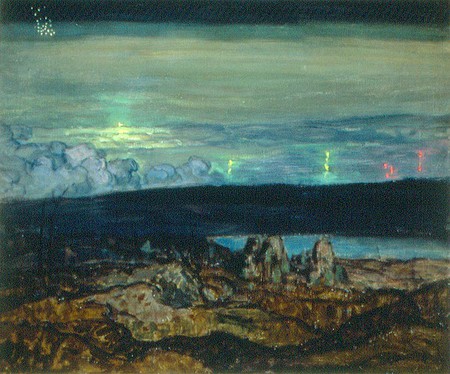 One of the things that defined the warfare in the First World War was the widespread use of poisonous gas. While you’ll often find this discussed in history books, literature, and even poetry, Canadian war artist A.Y. Jackson’s depiction of a gas attack from afar offers another perspective on the whole thing. In this case, the painting is even more powerful because viewers are torn and might even think the sparks of color are beautiful, like fireworks – before realizing what they are and what they’re doing.