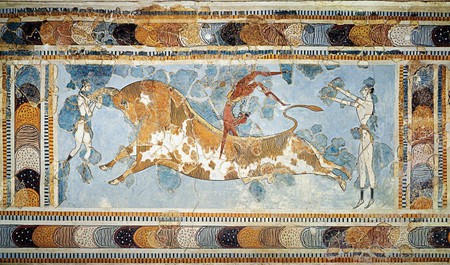 Most people have an idea of what the Dark Ages are, some sense of the cultural and economic decline that befell Western Europe following the collapse of its half of the Roman Empire in the fifth century AD. Indeed, the scarcity of both written records and artistic output available for that time and place point to a certain dimming down of society. Yet that phenomenon is hardly unique. As historian Eric Cline demonstrates in his gripping book, 1177 B.C.: The Year Civilization Collapsed, a much more brutal ‘dark age’ hit the civilizations of the eastern Mediterranean more than two thousand years ago, an event now known to us as the Bronze Age Collapse. 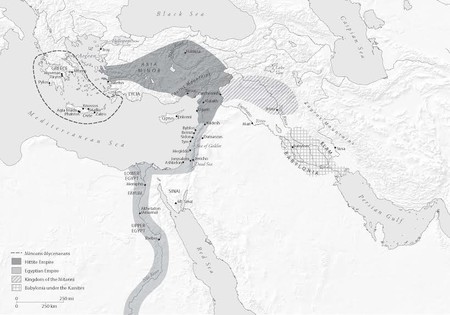 It was around the end of 13th century B.C. that the large, sophisticated empires of the region began to disintegrate. Only two dynasties, those of Egypt and Assur, would manage to survive, although both were heavily diminished. Meanwhile, others like the Hittites disappeared completely, while the Greeks would not be heard from again until some five or six hundred years later. The reasons for this astounding series of events are complex and at times impossible to fully know, yet as Cline goes on to demonstrate below, factors – from the arrival of the mysterious Sea Peoples to a close succession of catastrophic earthquakes – tend to point towards one theory in particular, that of the ‘systems collapse’.

‘In 1985, when Nancy Sandars published a revised edition of her classic book on the Sea Peoples, she wrote, “In the lands surrounding the Mediterranean, there have always been earthquakes, famines, droughts and floods, and in fact dark ages of a sort are recurrent.” Furthermore, she stated, “catastrophes punctuate human history but they are generally survived without too much loss. They are often followed by a much greater effort leading to greater success.” So what was different about this period, the end of the Late Bronze Age? Why didn’t the civilizations simply recover and carry on?

As Sandars mused, “many explanations have been tried and few have stood. Unparalleled series of earthquakes, widespread crop-failures and famine, massive invasion from the steppe, the Danube, the desert—all may have played some part; but they are not enough.” She was correct. We must now turn to the idea of a systems collapse, a systemic failure with both a domino and a multiplier effect, from which even such a globalized international, vibrant, inter-societal network as was present during the Late Bronze Age could not recover.

Colin Renfrew of Cambridge University, one of the most respected scholars ever to study the prehistoric Aegean region, had already suggested the idea of a systems collapse back in 1979. At the time, he framed it in terms of catastrophe theory, wherein “the failure of a minor element started a chain reaction that reverberated on a greater and greater scale, until finally the whole structure was brought to collapse.” A potentially useful metaphor that comes to mind is the so-called butterfly effect, whereby the initial flapping of a butterfly’s wings may eventually result in a tornado or hurricane some weeks later on the other side of the world. We might, for example, cite the attack by the Assyrian king Tukulti-Ninurta I on the vaunted Hittite forces. His defeat of their army, at the end of the thirteenth century BC during Tudhaliya IV’s reign, may in turn have emboldened the neighboring Kashka to subsequently attack and burn the Hittite capital city of Hattusa.

Renfrew noted the general features of systems collapse, itemizing them as follows: (1) the collapse of the central administrative organization; (2) the disappearance of the traditional elite class; (3) a collapse of the centralized economy; and (4) a settlement shift and population decline. It might take as much as a century for all aspects of the collapse to be completed, he said, and noted that there is no single, obvious cause for the collapse. Furthermore, in the aftermath of such a collapse, there would be a transition to a lower level of sociopolitical integration and the development of “romantic” Dark Age myths about the previous period. Not only does this fit the Aegean and the Eastern Mediterranean region ca. 1200 BC, but, as he pointed out, it also describes the collapse of the Maya, Old Kingdom Egypt, and the Indus Valley civilization at various points in time. As mentioned, such topics and discussions of “collapses” throughout history, and of the possibly cyclical rise and fall of empires, have subsequently been taken up by other scholars, most popularly and recently by Jared Diamond.

Not surprisingly, not every scholar agrees with the idea of a systems collapse at the end of the Late Bronze Age. Robert Drews of Vanderbilt University, for instance, dismisses it out of hand because he does not think that it explains why the palaces and cities were destroyed and burned. However, as we have seen, soon after 1200 BC, the Bronze Age civilizations collapsed in the Aegean, Eastern Mediterranean, and Near East, exhibiting all of the classic features outlined by Renfrew, from disappearance of the traditional elite class and a collapse of central administrations and centralized economies to settlement shifts, population decline, and a transition to a lower level of sociopolitical integration, not to mention the development of stories like those of the Trojan War eventually written down by Homer in the eighth century BC. More than the coming of the Sea Peoples in 1207 and 1177 BC, more than the series of earthquakes that rocked Greece and the Eastern Mediterranean during a fifty-year span from 1225 to 1175 BC, more than the drought and climate change that may have been ravaging these areas during this period, what we see are the results of a “perfect storm” that brought down the flourishing cultures and peoples of the Bronze Age—from the Mycenaeans and Minoans to the Hittites, Assyrians, Kassites, Cypriots, Mitannians, Canaanites, and even Egyptians.

In my opinion, and Sandars’s before me, none of these individual factors would have been cataclysmic enough on their own to bring down even one of these civilizations, let alone all of them. However, they could have combined to produce a scenario in which the repercussions of each factor were magnified, in what some scholars have called a “multiplier effect.” The failure of one part of the system might also have had a domino effect, leading to failures elsewhere. The ensuing “systems collapse” could have led to the disintegration of one society after another, in part because of the fragmentation of the global economy and the breakdown of the interconnections upon which each civilization was dependent.

In 1987, Mario Liverani, of the University of Rome, laid the blame upon the concentration of power and control in the palaces, so that when they collapsed, the extent of the disaster was magnified. As he wrote, “the particular concentration in the Palace of all the elements of organization, transformation, exchange, etc.—a concentration which seems to reach its maximum in the Late Bronze Age—has the effect of transforming the physical collapse of the Palace into a general disaster for the entire kingdom.” In other words, to put it in modern investment terms, the Bronze Age rulers in the Aegean and the Near East should have diversified their portfolios, but they did not.

Two decades later, Christopher Monroe cited Liverani’s work and suggested that the economy of the Late Bronze Age became unstable because of its increasing dependency on bronze and other prestige goods. Specifically, he saw “capitalist enterprise”—in which he included long-distance trade, and which dominated the palatial system present in the Late Bronze Age—as having transformed traditional Bronze Age modes of exchange, production, and consumption to such an extent that when external invasions and natural catastrophes combined in a “multiplier effect,” the system was unable to survive.

In writing about the situation at the end of the Late Bronze Age in his book Scales of Fate, Monroe describes the interactions of the various powers in the Aegean and Eastern Mediterranean as an “intersocietal network,” which agrees with the picture presented here. He points out, as I have, that this period is “exceptional in the treaties, laws, diplomacy, and exchange that created the first great international era in world history.”

However, most interestingly, Monroe further notes that such networks have ways of postponing the inevitable collapse, which comes to all societies eventually. As he says, “revolts are quelled, raw materials are found, new markets are opened, price controls are put into effect, merchants’ properties are confiscated, embargoes [are] placed, and war is waged.” He also says, though, that “generally the rulers of the core power or powers treat the symptoms rather than the causes of instability,” and concludes that the “violent destruction of the Late Bronze palatial civilization, as attested in the textual and archaeological record, was, like many collapses, the inevitable result of limited foresight.”

I am in agreement with Monroe up until this last point, for I do not think that we are justified in blaming the collapse simply on “limited foresight,” given the multiple probable factors explored above, which the ancient leaders could not possibly have completely predicted. An unanticipated systems collapse—quite possibly triggered by climate change, as hypothesized recently by Brandon Drake and the team led by David Kaniewski, or precipitated by earthquakes or invasion— seems much more likely, but Monroe’s words might serve as something of a warning for us today, for his description of the Late Bronze Age, especially in terms of its economy and interactions, could well apply to our current globalized society, which is also feeling the effects of climate change.’