10 Must-Visit Museums In The Gulf States

The Gulf States are latecomers to the museum world, but this hasn’t stopped an explosion in museums and galleries in the past twenty years. The new museums across the countries of the Middle East remember thousands of years of Arab history and have been filled with highly prized artifacts to offer some of the best-curated collections in the world. Here is our guide to ten of most interesting and unusual museums in the area, from Qatar to Iraq and Bahrain to Saudi Arabia. 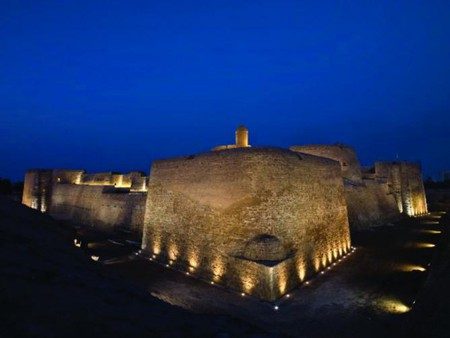 The mound upon which the Bahrain Fort stands is, in itself, a piece of history. It is composed of layers of archaeological matter created as successive civilizations built on the remains of previous occupants. Archaeological digs have uncovered dwellings and military forts from 2300 BCE onwards, and 500 key artifacts are now displayed along a wall uncovered during one of the digs. The Fort is not accessible by public transport but is a half hour walk from Manama, Bahrain’s capital. 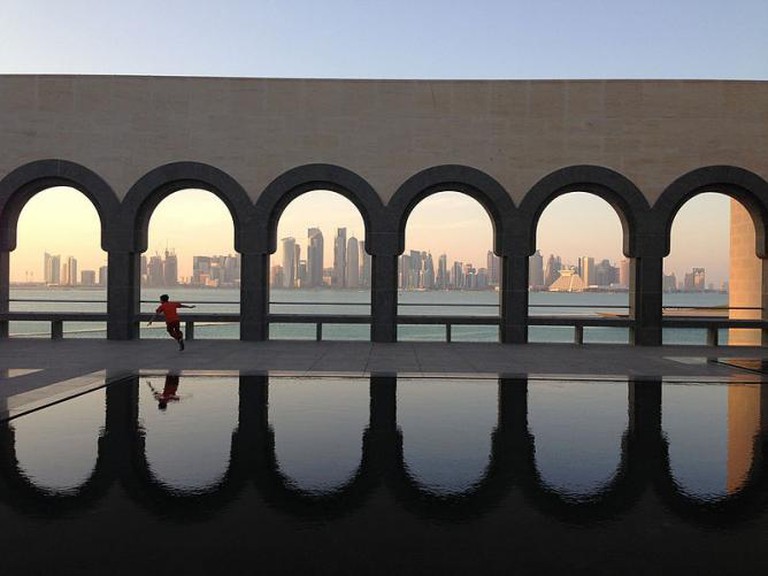 Sulaymaniyah Museum, Slemani | © Andrew Wiseman/WikiCommons
The Slemani Museum gained notoriety in 2011 after Kurdish authorities offered rewards for the return of artifacts stolen in looting. This was a controversial move but helped the museum rebuild its impressive collection. Only $600 was paid for the return of an ancient Sumerian text, and a large proportion of the 15,000 stolen artifacts have now been returned to the Iraqi museum. Artifacts date from 15,000 and include the obelisk of Hammurabi, whose origins can be traced back to 1792-1750 BC.
Open In Google Maps
Şeqamî Bêxud, Sulaymaniyah, Sulaymaniyah Governorate, Iraq
+964533200609
Visit Website
Give us feedback

The Museum of Islamic Art opened in 2008, but should not be judged by its relative youth. It houses the largest collection of Islamic art in the world, handpicked by the elusive, yet widely respected Sheikha Mayassa, currently at the helm of Qatar’s pursuit of culture and art. The museum stands in the Doha bay on its own custom-made island and was designed by architect I.M. Pei (also responsible for the renovation of the Louvre museum in Paris). It often hosts temporary, eclectic exhibitions, including a recent display of board games from across the Islamic world. Visit the on-site French Mediterranean restaurant if you need a break while browsing its 45,000 square meters of gallery space.
Open In Google Maps
Doha, Qatar
+97444224444
Visit Website
Give us feedback

Museum
Facebook
Email
Twitter
Pinterest
Copy link
Share
Map View
This small museum is a hidden gem on the streets of Doha. On show at the Qatar, Weaponry Museum are hundreds of weapons from different eras, including ceremonial swords and traditional daggers belonging to Lawrence of Arabia. One exhibition explores the use of horses in combat, complete with a display of saddles and equine military equipment. It can only be accessed with a tour guide or by prior appointment but is well worth a visit for its insight into the development of weaponry through the ages.
Open In Google Maps
Al Luqta Doha, Al Rayyan Municipality, Qatar
Give us feedback 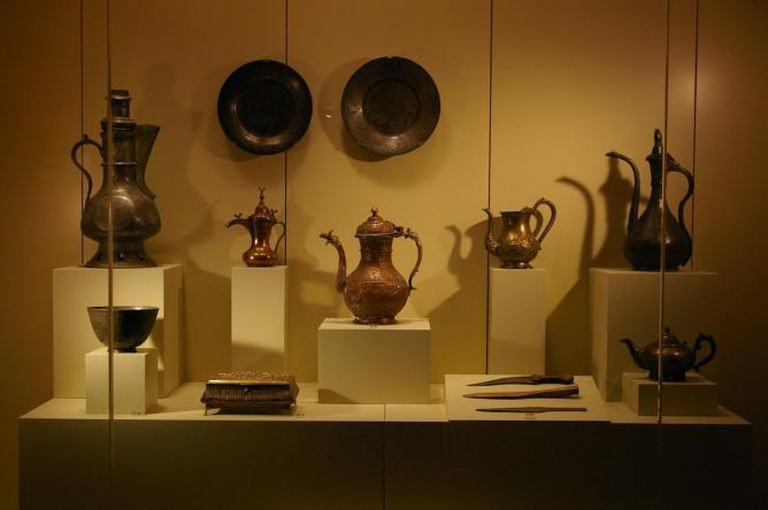 Tareq Rajab Museum of Islamic Calligraphy | © Active Steve/Flickr
Kuwait’s first minister of antiquities set up the Tareq Rajab Museum to display his private collection of musical instruments, jewelry, and paintings. Unlike other Kuwaiti museums, it escaped looting during the 1990 Iraq invasion when soldiers blocked off the entrance and hid the exhibits in boxes. Today, the museum hosts lectures and temporary exhibitions to encourage Kuwaiti arts and culture, in addition to showcasing unusual, historically significant objects. In 2008, the one-of-a-kind Tareq Rajab calligraphy collection was established, which displays handwritten script from the 7th century onwards.
Open In Google Maps
1 Street, Jabriya, Hawalli Governorate, Kuwait
+96525317358
Visit Website
Give us feedback 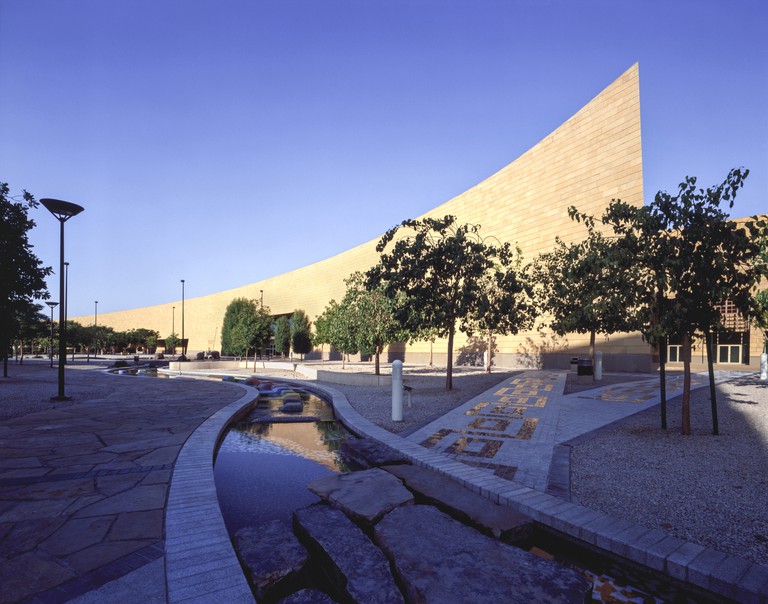 The National Museum of Saudi Arabia houses eight galleries | © ashfordplatt / Alamy Stock Photo
Established in 1998, the National Museum of Saudi Arabia offers eight galleries of Arabian culture, art, and history, with one dedicated to the life of the prophet Mohammed and others to the Hajj and the pre-Islamic era. Highlights include interactive displays with video footage and a full-scale reconstruction of a Nabataean tomb from Madain Saleh. Residing in the King Abdulaziz Historical Centre, the building of the museum is a stunning, symbolic piece of modernist architecture designed by Canadian architect Raymond Moriyama, and inspired by the sand dunes that surround the city of Riyadh.
Open In Google Maps
King Faisal Rd, Al Murabba, Al Murabba Riyadh, Riyadh Province, 11564, Saudi Arabia
+966114029500
Visit Website
Give us feedback

This private museum was founded and funded by a single family, the Zubair’s, and was opened in 1998 to support the growth of national museums in Oman. The Bait Al Zubair collection is housed across three traditional buildings. One was the home of the personal advisor to the Sultans of Oman, while the third was opened in 2008 and was designed to reflect the architectural styles of 19th century Oman. The museum holds an impressive collection of weapons and traditional Omani and Islamic dress.

Oman’s Armed Forces Museum offers a guide to the country’s conflicts and forces and is still run by the military today. It was opened in 1988 under the orders of the Sultan with sections dedicated to the country’s Army, Air Force, Royal Guard and Navy. The exhibits include military vehicles outside the museum and a full-scale warship. Sitting in the historic Bait Al Falaj Fort, this relatively small museum manages to impress with its carefully curated collection, picked out to showcase Oman’s military history from a local perspective.
Open In Google Maps
Bayt Al Falaj Muscat, Muscat Governorate, Oman
+96824312655
Visit Website
Give us feedback

The Dubai Moving Image Museum, dedicated to the history of the moving image, is the only museum of its kind in the Middle East. It was founded by Bahraini businessman Akram Miknas in order to share his extensive personal collection with the public. An 18th-century Dutch peep box viewer shares gallery space with early cinema cameras, shadow puppets, and the collection explores the human fascination with the moving image. Visitors move through the use of shadows for entertainment to camera obscura, magic lanterns, and early animation. 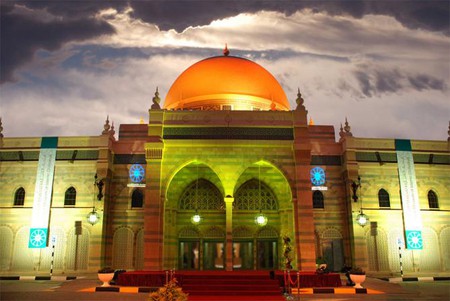 A majestic golden dome on the Sharjah corniche makes the Museum of Islamic Civilisation hard to miss. The long exhibition halls of the converted souq (market) house thousands of artifacts from the Emirates’ history, including manuscripts, coins, metalwork and ceramics. Exhibits are dedicated to the history of science and religion in the country, and a tearoom offers visitors a chance to relax under the beautiful mosaic ceiling.