Why Is the Leek a National Symbol in Wales? 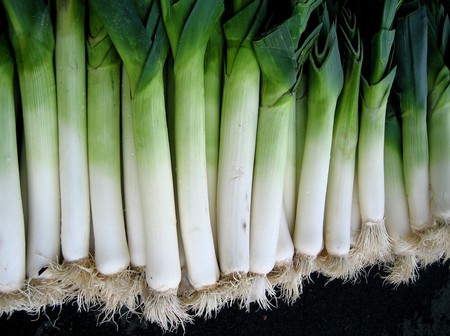 It forms the basis of their national dish, it is displayed proudly at the rugby, it’s even stamped on the Welsh pound coin, but what originally brought the leek and the Welsh together?

There are several stories which link Wales with the leek. One of the most famous is that on the eve of battle with the Saxons, Wales’s patron St, David advised the army to wear a leek to distinguish themselves from the enemy. This theme carried through to the Hundred Years War of the 13th and 14th centuries when Welsh archers were a key weapon in battle. With longbows as tall as a man, they would fire a storm of arrows to bring down the enemy…and would pop a leek in their caps to identify themselves. They also wore a green and white ‘uniform’ whilst in battle. When the Tudors, a Welsh family, originally took the throne of England, members of the Household Guard wore leeks on St David’s Day and were given a bonus in their pay. By the Elizabethan period William Shakespeare wrote in his play, Henry V that the wearing of leeks was an ancient tradition for the Welsh – the character Fluellen tells the King (who was born at Monmouth, Wales) that he is wearing a leek, “for I am Welsh, you know, good countryman.”

There are also tales of leeks being given as rations to Welsh soldiers, and as they are the main ingredient of the Welsh soup cawl, this is quite believable. The leek, of course, has been about for thousands of years and over that time has been used for medicinal purposes as well as food, and even today leeks are worn by every member of a Welsh regiment on St David’s Day – however, the other great symbol of Wales, the daffodil, is certainly a less pungent addition to an outfit! Interestingly, the Welsh name for the daffodil is Cenhinen Bedr or Peter’s Leek.